Younger soldiers under stress more likely to get help 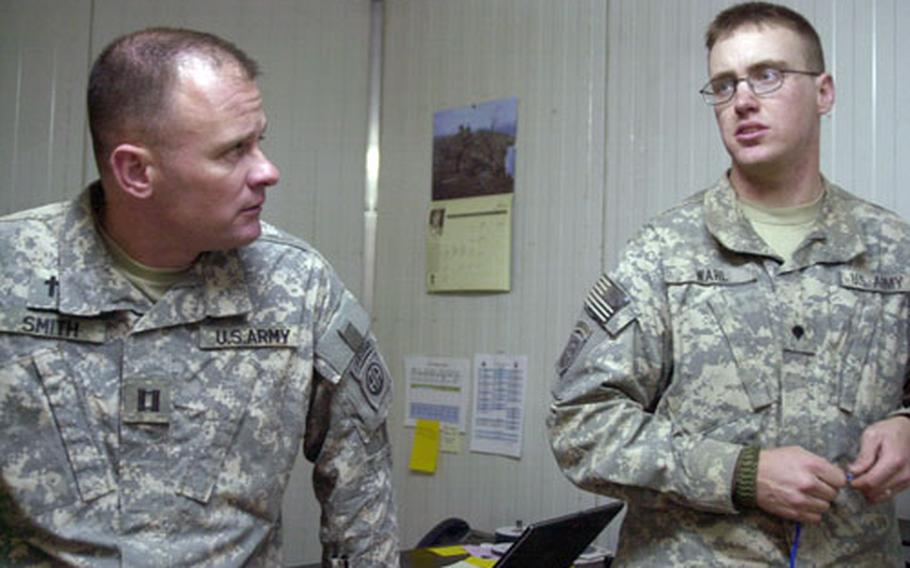 Capt. Mike Smith, the battalion&#39;s chaplain, talks with Spc. Richard Wahl in his office. The 20-year-old was worried recently about his pregnant wife, who needed to go to the doctor and didn&#39;t have a babysitter for the other two kids. Smith&#39;s wife ended up helping her get to the doctor. (Teri Weaver / S&S)

Capt. Mike Smith, the battalion&#39;s chaplain, talks with Spc. Richard Wahl in his office. The 20-year-old was worried recently about his pregnant wife, who needed to go to the doctor and didn&#39;t have a babysitter for the other two kids. Smith&#39;s wife ended up helping her get to the doctor. (Teri Weaver / S&S) 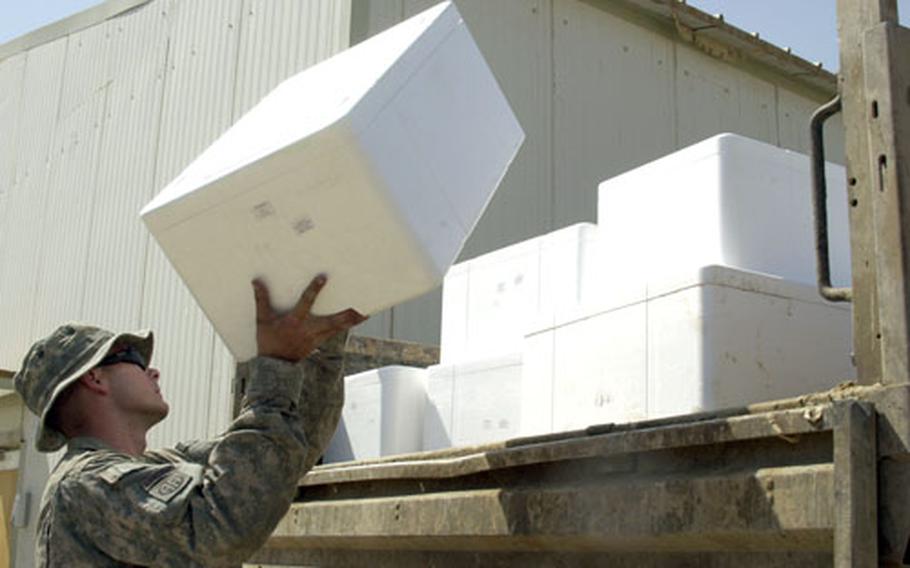 Spc. Philip Russell, 24, of Carthage, N.C., loads boxes of spoiled vegetables onto a garbage truck. As part of the food crew, Ruseell never leaves base. He also almost never gets to spend a day inside. “Occasionally I’ll squeeze in a phone call home,” Russell says about his time off. “It was pretty rough for a while. I had some issues at home and I couldn’t do anything about it. I knew I was slowing down but I didn’t know why.” (Teri Weaver / S&S)

MADAIN, Iraq &#8212; Spc. Richard Wahl is married with two kids and a baby due in August.

When his wife developed a serious condition a few weeks ago, the young couple weren&#8217;t sure what to do. The crisis came down to geography.

Wahl, 20, of the 1st Battalion, 505th Parachute Infantry Regiment is on his first tour in Iraq.

About half of the battalion has deployed previously, some, multiple times. For the most part, those soldiers are dealing with this tour fairly well, said the battalion chaplain, Capt. Mike Smith.

But the soldiers who more often seek help are younger, privates or corporals, who are experiencing Iraq for the first time, said Lt. Col. Avery Davis, the chief of physical medicine at Walter Reed Army Medical Hospital. He is attached to the battalion for a year as its primary doctor.

These younger soldiers, some still teenagers, are experiencing their first serious relationships, their first serious jobs and their first time away from home &#8212; all in a war zone. That mix can turn into anger, lethargy or something more dangerous if left alone, Smith and Davis said.

The younger troops are also coping with a different war.

The 1st Battalion, 505th Parachute Infantry Regiment lost nine soldiers during its last deployment. This time, they are halfway through a year tour without a fatality. It&#8217;s a statistic their commander, Lt. Col. Dave Bair, won&#8217;t say aloud because he&#8217;s too worried about what might happen tomorrow.

But stresses still wear on soldiers who never go through a firefight or leave the wire. The frenetic pace of keeping 800 soldiers fed, clothed and equipped means that even most soldiers who don&#8217;t patrol end up working 12 to 14 hours a day, seven days a week.

Stansbury is one of six women in the battalion and the senior female noncommissioned officer. She&#8217;s responsible for all the parts the unit needs for its vehicles, weapons and night-vision goggles. At any given time, she&#8217;s tracking 1,000 parts for each of the battalion&#8217;s six companies.

Stansbury is used to the pace, which generally means working 12 hours a day in a metal box that feels more like a submarine than an office. By the end of this tour, she will have spent three of her six Army years in Iraq.

She married another soldier last year. They won&#8217;t see each other again until February.

But Stansbury rarely gets mad, she and her soldiers say. She likes her job and the men she works with. She runs every night in lieu of dinner. She listens to music at work. She thinks of her quarters &#8212; a cargo container she shares with three other people &#8212; as a place just to sleep.

Others need more encouragement to control that stress.

Even though Spc. Philip Russell, 24, of Carthage, N.C., never leaves base, he also almost never gets to spend a day indoors. He manages the food deliveries and stock for the battalion, from 6 a.m. to about 9 p.m. daily.

"Occasionally I&#8217;ll squeeze in a phone call home," Russell says about his time off. "It was pretty rough for a while. I had some issues at home and I couldn&#8217;t do anything about it. I knew I was slowing down but I didn&#8217;t know why."

Russell needed a break, and Smith gave him one. Each month, the chaplain takes a group of soldiers to "Freedom Rest," a place in the Green Zone in Baghdad where troops can spend three days away from the war.

Sgt. Ruben Troyer, the battalion&#8217;s NCO for the month in April, went to Freedom Rest as a reward.

"We had showers that actually worked," he said. "It was like being in the States."

Troyer, 26, of Holmes County, Ohio, is an infantryman with 1st Platoon, Company B. His job this tour is a combination of patrolling and manning guard stations. He has the tan line from his Kevlar helmet to prove it.

Troyer said he sees his soldiers get angry or burned out because of the internal politics within the company. Smith sees this, too, and as a former enlisted Marine, he tries to help the younger soldiers through those issues.

He also helps soldiers like Wahl, whose worry is on the other side of the world. Wahl went to the chaplain to unload. Smith listened and saw a quick solution. Smith&#8217;s wife ended up baby-sitting the kids while Wahl&#8217;s wife went to the hospital.

Wahl plans to take his leave in August, when the baby is due.