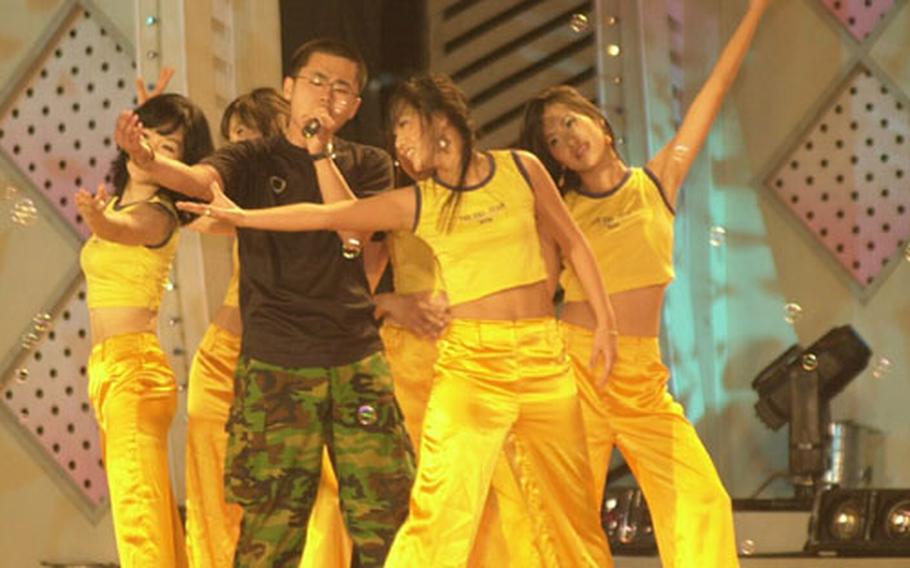 A South Korean soldier performs a song, with backup dancers, during the "Young Soldiers" entertainment show put on at bases throughout the country. (Joseph Giordono / S&S)

YANGJU, South Korea &#8212; It&#8217;s steadily drizzling on a muggy night full of bloodthirsty mosquitoes, and the TV production assistant is madly clapping his hands above his head, trying to get the audience to follow suit.

And though the hundreds of South Korean soldiers sitting in the first dozen rows oblige, the rest &#8212; stretching back in a sea of camouflaged uniforms, sitting on plastic chairs on a muddy military parade ground &#8212; sit firmly on their hands.

On an elaborately lit stage, a South Korean pop singer who&#8217;s dubbed herself the &#8220;The Beautiful Rocker&#8221; wails into a microphone as smoke billows and pyrotechnics explode.

It&#8217;s the opening act of &#8220;Young Soldiers,&#8221; a weekly South Korean television program taped over a four-hour period at a different military base each week, then edited down to an hour and shown in prime time on the national KBS network.

It&#8217;s like a United Service Organizations show at American military bases &#8212; if USO shows included soldiers dancing in drag, contests for soldiers to earn their first leave with their girlfriends in over two years, or tearful reunions with ailing parents. The show, a popular staple on South Korean television, has even been brought to U.S. installations where some native Koreans serve as augmentees to American units stationed here.

For the young South Korean soldiers, who serve compulsory stints in a notoriously disciplined army and are restricted to largely Spartan bases, having &#8220;Young Soldiers&#8221; visit their base is a rare treat.

&#8220;Many times, the life of a soldier can be difficult. However, special events such as this show help create lasting good memories of our time in the service,&#8221; Cpl. Oh Chang-jae said through an interpreter.

For Oh and the other 2,000 soldiers stationed at Olympic Base &#8212; so named because soldiers here once helped with organizing and protecting the 1988 Seoul Olympics &#8212; the break is welcome.

&#8220;I&#8217;ve been in the service almost four years now. A few years ago, they had a show similar to this at another location. However, I was put on base protection duty and was unable to watch it then,&#8221; Oh said.

This time, Oh gets a seat about halfway back into the audience. Over the next four hours, he&#8217;ll watch professional performances mixed in with both serious and goofy talents exhibited by his fellow soldiers.

The first soldier singer, a very earnest-looking young man in black T-shirt and camouflage pants, sings part of a Korean pop song while surrounded by dancers in shimmering gold outfits. Before every soldier performs, they turn to the crowd, snap off a smart salute and shout &#8220;Chung-seong!&#8221; Translated, it means &#8220;loyalty&#8221; and is the required salute call and response for the South Korean military.

Around 100 Olympic Base soldiers tried out for spots on the show, producers said, with a few dozen chosen to participate.

Next, a group of soldiers in wigs, camouflage pants and tight, brightly-colored T-shirts dance insanely amid the pyrotechnics to yet another pop song, finishing off their performance with by unfurling a banner reading &#8220;Olympic Base is the Best!&#8221;

The crowd goes wild, without any prompting from the television crew. For this show, a team of 40 technicians, cameramen and crowd-handlers has come to the base from the KBS network. They run seven cameras from various angles, controlling everything from a high-tech production van behind the stage.

One of the most popular segments features four soldiers given the chance to earn a few precious hours of leave with their girlfriends. The four girls stand on a smaller stage at the back of parade grounds, hidden behind paper silhouettes. Each girl does a short dance &#8212; &#8220;Hey, this isn&#8217;t a strip club!&#8221; yells one of the show&#8217;s good-natured hosts &#8212; and the soldier is supposed to pick his girlfriend from her outline.

Only this time, two soldiers are convinced the same mystery woman, the one behind door No. 4, is theirs. The stakes are high: None of the soldiers have seen their girlfriends in over two years.

Three soldiers turn out to be right; the one who guessed wrong gets to simply say &#8220;hi&#8221; to his girlfriend on the microphone before she&#8217;s escorted away. The three girls who are finalists run excitedly through the crowd to hug their boyfriends, but are stopped about halfway down.

The camera wasn&#8217;t in the right place, so the 24-month reunion is put off for a few more moments.

A jury of five female officers sits on the stage, charged with deciding which of the three couples should win the prize.

The show goes on into the night, winding up with a reunion between a soldier and his sick mother. Neither has seen each other in years, and the crowd responds with the appropriate tears.

For the young men conscripted into the South Korean military, there are few luxuries. But for a few hours, when &#8220;Young Soldiers&#8221; visits their base, they get a chance to unwind.

&#8220;Being able to host this show is a great honor, but being able to participate is an even greater experience. It lifts the soldiers&#8217; spirits and morale and helps us cope with the sometimes difficult lifestyles of soldiers,&#8221; said Sgt. Chai Suk-yul, one of the bewigged dancers.