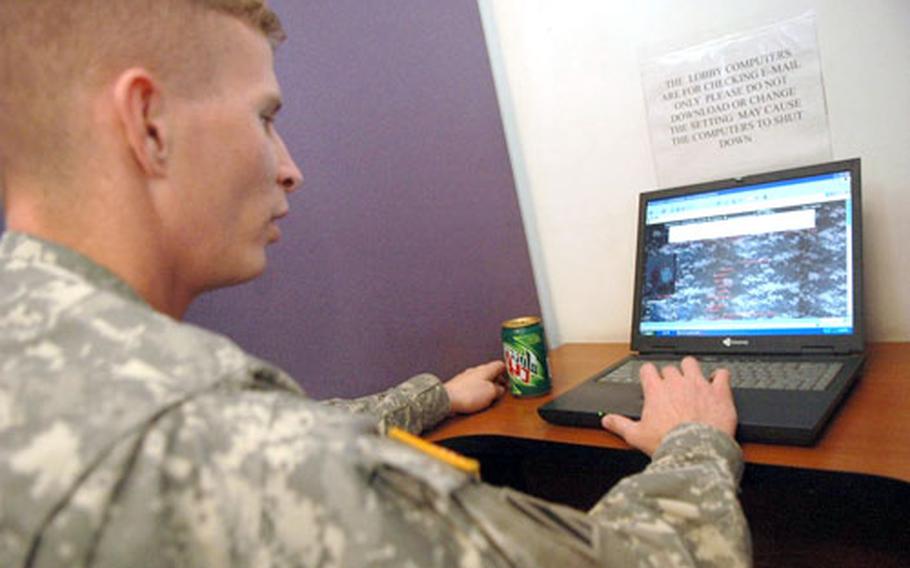 CAMP VICTORY, Iraq &#8212; In wars past, soldiers penned labored letters to their loved ones and eagerly awaited daily mail call for news of life back home.

These days, they have MySpace.

The free Web site, which allows users to make their own personalized Web pages, post photos and text and share files, is &#8212; for young soldiers, at least &#8212; the latest step after pedestrian e-mail, dinosaurish blogs and that antiquated implement, the telephone.

MySpace representatives did not answer a query as to how many servicemembers use the Web site. However, a quick search of the site among members between the ages of 18 and 55 turns up more than 3,000 people who say they are in Iraq. An equal number say they are in Afghanistan, though MySpace has no way to verify members&#8217; locations.

A random search of member sites from Iraq and Afghanistan shows a definite military presence, with many pages of soldiers posting photos of themselves in uniform or &#8212; as seems to be the trend among young male soldiers &#8212; flexing their muscles, sans the top half of their uniform.

Anecdotally, the site&#8217;s popularity among the under-30 crowd is staggering: Of a random sampling of young soldiers at Baghdad-area bases, nearly all said they were members of the site.

Like most MySpacers interviewed, Ruckdaschel said he checks his page daily.

Many soldiers said the lack of other entertainment in Iraq sends them scuttling into their respective Spaces.

Why does he use it, then?

&#8220;I browse for girls,&#8221; he said, showing his expansive friends list, which included many of the female persuasion.

Soldiers can visit the site in Morale, Welfare and Recreation computer labs &#8212; where it is very popular &#8212; but Maj. Jim Hardy, information assurance manager for Multi-National Division-Baghdad, said the site is off-limits on official work computers.

He added that no matter what computer they&#8217;re using, servicemembers are required at all times to follow military guidelines that forbid pornographic material on Web sites.

The site also seems to draw a line in the virtual sand between the younger generation and those over 30.

Like Rodriguez, many in the over-30 set seem to prefer real space to virtual space.

But there are holdouts among the young, too: Air Force Staff Sgt. Brandon Charboneau, 24, said he started a MySpace account, but hasn&#8217;t used it since he came to Iraq. Instead, he said, he calls or writes letters to his loved ones.

Holdouts aside, the site is so popular that many soldiers joke that if the military banned the site, consequences could be dire.