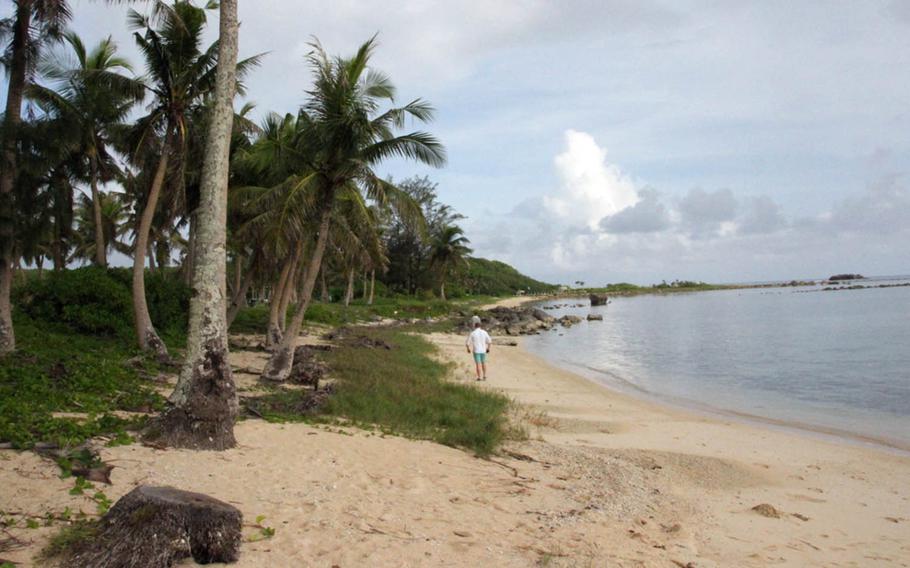 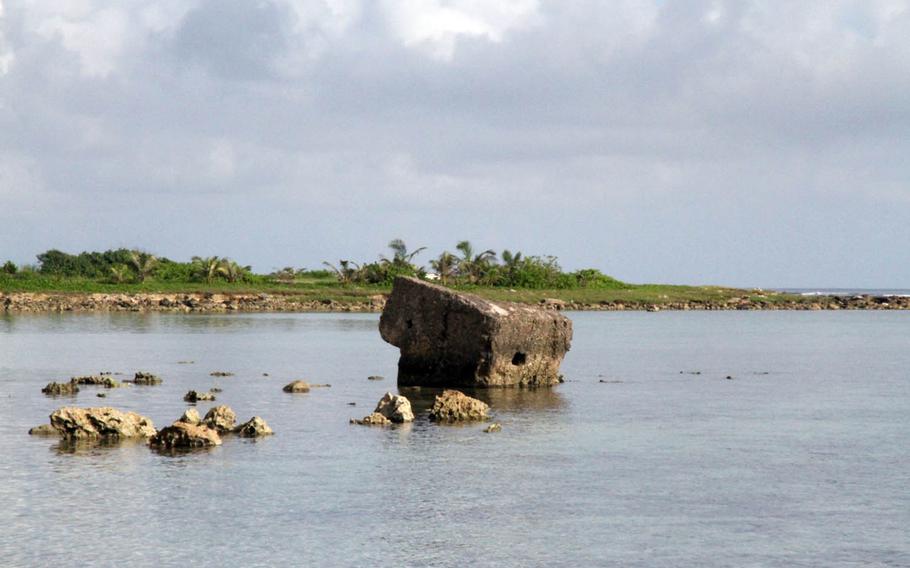 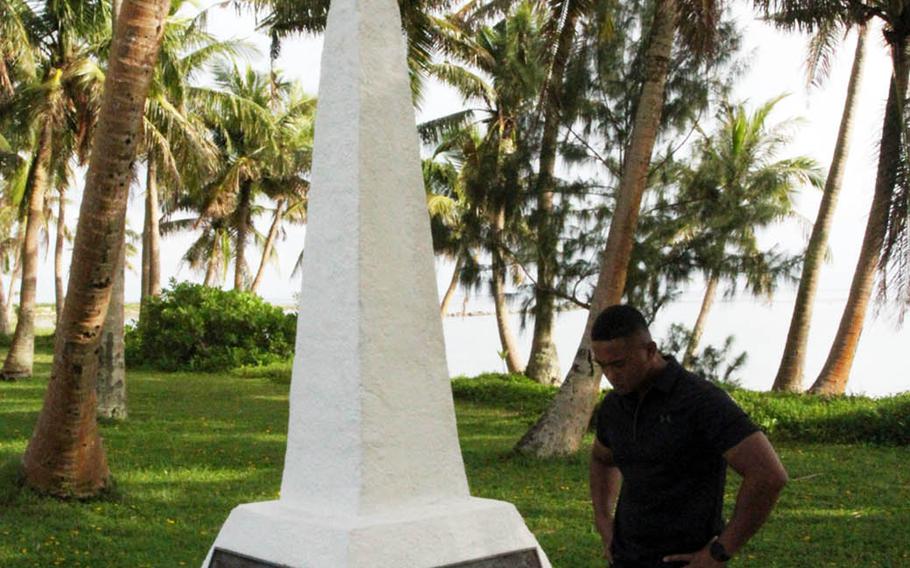 Buy Photo
A member of the Okinawa-based 3rd Marine Division reflects at a monument near Asan Beach, Guam, dedicated to the Marine liberators, Wednesday, July 18, 2018. (Matt Burke/Stars and Stripes) 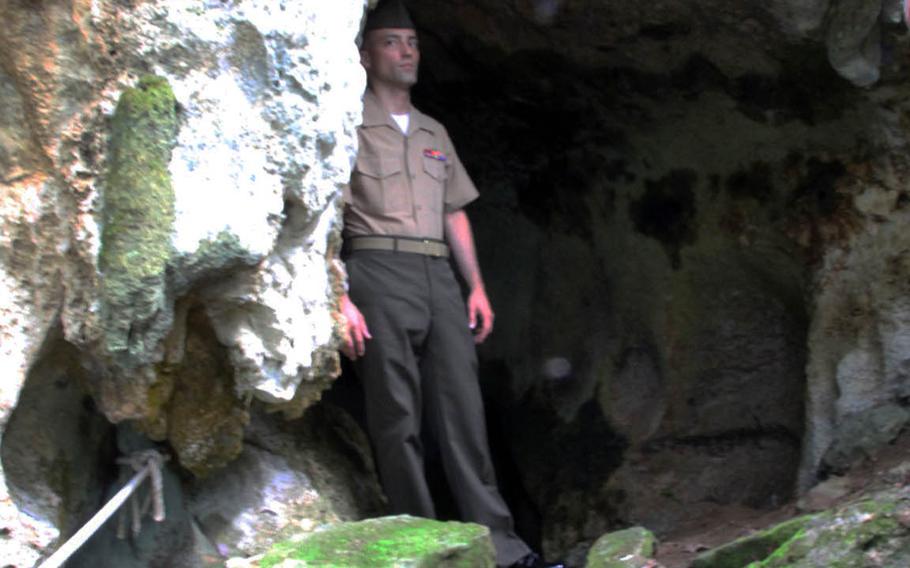 Buy Photo
A Marine stands guard outside Fena Cave at Naval Base Guam, Thursday, July 19, 2018. The Japanese slaughtered 33 men, women and children there on July 19, 1944. (Matt Burke/Stars and Stripes) 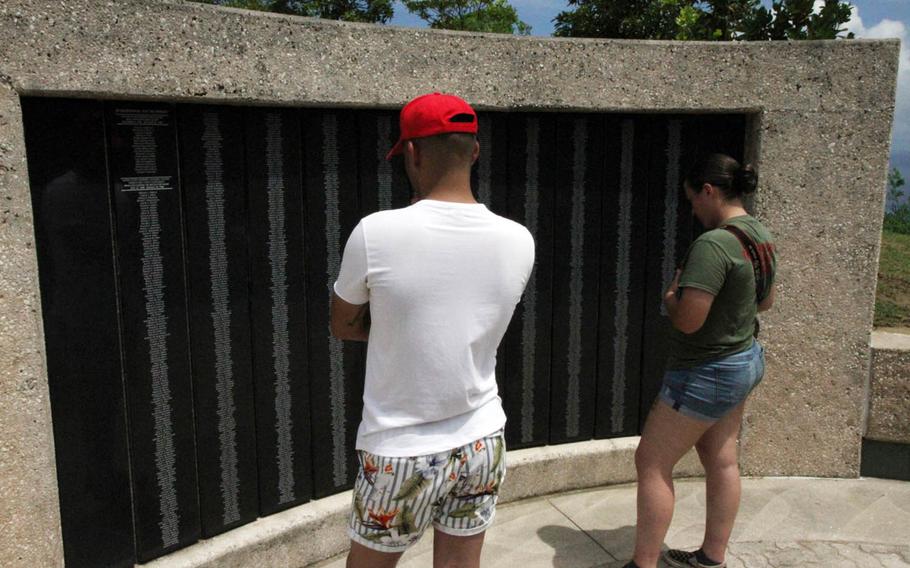 Buy Photo
Members of the 3rd Marine Division read the names of the Marines who perished liberating Guam from Japanese control during World War II on a monument atop Nimitz Hill, Wednesday, July 18, 2018. (Matt Burke/Stars and Stripes) 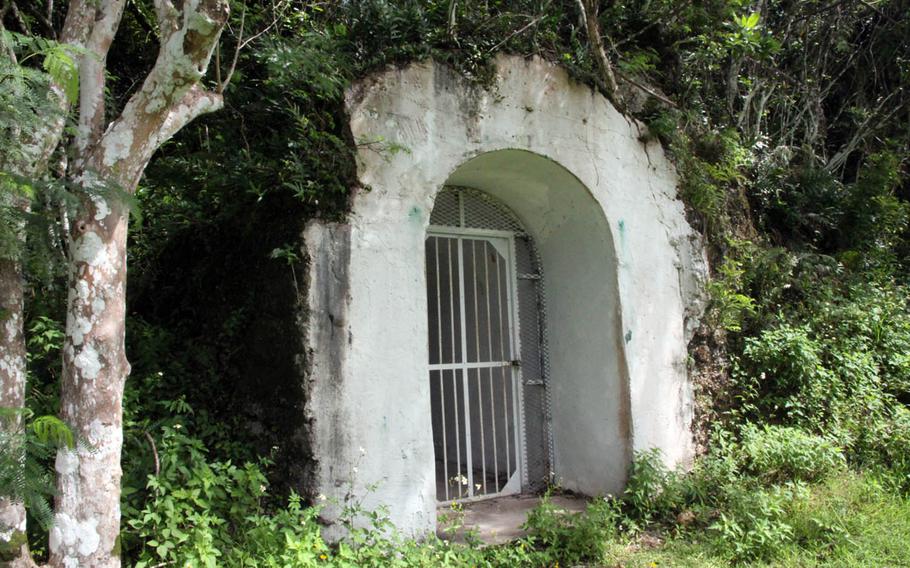 1st Lt. Joshua Hays squinted as a relentless morning sun bore down upon him. He looked at his watch and pointed across Guam’s Asan Beach, which stretched before him and a group of junior Marines from the 3rd Marine Division.

“In 5-4-3-2-1 – so 0829 – the first wave had just hit the shore,” Hays shouted. The Marines peered into the “Devil’s horns,” an area between two natural rock formations where their predecessors landed under heavy fire to retake Guam from the Imperial Japanese on July 21, 1944.

“They are heavily in contact,” Hays told the group late last week during a tour of Guam battle sites ahead of Saturday’s 74th Liberation Day anniversary. “In approximately 15 to 30 minutes from now, 3rd Marine Regiment would already have 375 casualties … dead.”

Approximately 55,000 American servicemembers from the 3rd Marine Division, the 1st Provisional Brigade and the Army’s 77th Infantry Division fought a fierce battle with an entrenched Japanese force of about 20,000 to liberate Guam.

The U.S. lost 1,880 troops on the tiny U.S. territory in the western Pacific, with nearly 6,000 wounded. All but 1,250 Japanese were killed, according to the Marine Corps. Though organized resistance was declared over on Aug. 10, 1944, thousands of Japanese took to the jungles and had to be hunted down and killed over the next year.

The people of Guam – all U.S. citizens – suffered 1,170 deaths during the occupation, with another 14,721 surviving various atrocities, roughly 75 percent of the population.

Gaining appreciation Through the tour, Hays wanted his Marines to gain an appreciation for the difficult terrain and fighting conditions that are a hallmark of the Pacific, while imparting lessons that can be passed down to those coming up through the ranks.

He instructed them to appreciate the terrain, the rocks, every root, every tree, and the hill’s steep pitch.

“As leaders, what would you do and how can you get the Marines ready to go through these kinds of obstacles?” Hays asked. “How can you train your body and mind to be ready to lead through this kind of environment? Because it’s not easy.”

After the Marines got to the top of the hill and spent some time peering into the concrete fortification, they piled into vans and drove to the top of the ridge that towers over the beachhead — now known as Nimitz Hill — and peered into well-maintained Japanese command fortifications that have sat for 74 years as if untouched.

They also visited a memorial wall with the names of all U.S. servicemembers who died during the battles for Guam and the thousands of Guamanians and Chamorro who suffered Japanese atrocities. Hays pointed out the slope below where a banzai suicide attack originated.

“Just like Okinawa, the Japanese enslaved a lot of the Chamorro people and a lot of the Guamanians to build their defenses, to build their pillboxes, to make sure they had everything ready to go for the next fight,” Hays said. The people of Guam “hold a special place in their society and their culture for U.S. military and servicemembers out here.”

‘Almost holy ground’ The next day, locals, indigenous Chamorro, Guam politicians and Marine and Navy representatives gathered at Naval Base Guam to honor 33 men, women and children who were victims of the Fena Cave Massacre on July 19, 1944, according to the Pacific Daily News. A traditional Chamorro ceremony and blessing was performed outside the mouth of the cave.

The massacre is regarded as one of the worst atrocities committed by the Japanese during World War II. They plied locals into the cave with the promise of food before slaughtering them with grenades and bayonets.

The significance of being on Guam, with access to hallowed battle sites was not lost on Cpl. Ryan Siddell of Marine Corps Activity Guam.

“It’s bittersweet, the huge travesty; it’s a shame that [the massacre] happened, and it’s the reason why we’re out here, but at the same time it’s very good to see all these people out here — military and civilians — paying tribute and showing support for what happened here,” he said.

Siddell said visiting the battle sites was like being transported back in time.

“As a Marine, it’s almost holy ground,” he said. “For me to represent the same service, the same branch as those guys, it’s truly an honor.”