Young couples deal with a separation caused by war 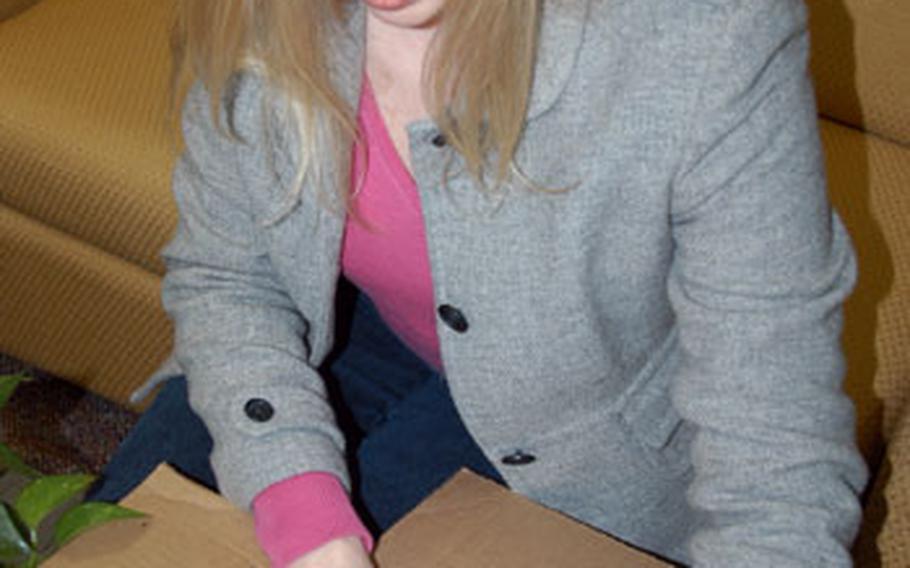 Noel Pearson puts together a care package for her husband, Capt. Patrick Pearson, an F-16 pilot with the 14th Fighter Squadron who is deployed to Balad Air Base, Iraq, for four months. (Jennifer H. Svan / S&S)

MISAWA AIR BASE, Japan &#8212; The daily rhythm of life in Iraq for Airman 1st Class Jennifer Mayo consists of work, sleep, meals and mortars. The 21-year-old avionics specialist with Misawa Air Base&#8217;s 35th Aircraft Maintenance Squadron is about six weeks into her first deployment at Balad air base, north of Baghdad.

She&#8217;s adjusted to sleep deprivation, and calls the routine bursts and booms of gunfire and mortars &#8212; mostly outside the wire &#8212; background noise.

What she can&#8217;t quite shake is missing her husband and best friend, Airman 1st Class Michael Mayo, also an avionics specialist, but still at Misawa.

Back home at Misawa, Michael has stepped up his snowboarding and video gaming but he feels the same void. &#8220;For me, as time goes by, it gets a little bit harder,&#8221; he said of being apart.

The Mayos are one of three young Misawa couples separated for the first time by the war in Iraq. Many more families here are experiencing similar hardships, with more than 400 airmen deployed in support of the 14th Fighter Squadron for four months.

For Jennifer, there&#8217;s been little time to dwell on missing her husband of two years. Working a swing shift, she clocks 13-to-14 hour days.

The high point to date was the first time one of the F-16s she works on came back without a bomb. It had been dropped in combat.

Michael said she&#8217;s never mentioned the mortars to him on the phone.

Misawa&#8217;s airmen are slated to return in May. But the Mayos aren&#8217;t making big plans. Michael is an alternate to deploy to Iraq this spring with the 13th Fighter Squadron.

Amber Newkirk, 19, is in the care package business. In the first month that her husband, Senior Airman Nathaniel Newkirk, 21, was gone, she mailed him an estimated 15 to 20 boxes. And it&#8217;s not the necessities he wants.

For Nathaniel, a life support technician, the days downrange hold the same routine: The alarm sounds at 6 a.m., and he&#8217;s to work by 8 a.m. After his shift ends 12 hours later, he gets dinner and then heads to the gym, winding down with some TV or a movie.

Noel keeps busy with trips on the weekend and Monday night dinners and Wednesday lunches with other spouses.

Patrick is on his first combat deployment. He reports that the food is good and the rooms are comfortable.

&#8220;The fact that you can influence the situation for friendly forces on the ground or turn the tide in their favor just by showing up is surprisingly rewarding.&#8221;

He tries not to tell Noel details that would make her worry.