Young children get their feet wet at Zama 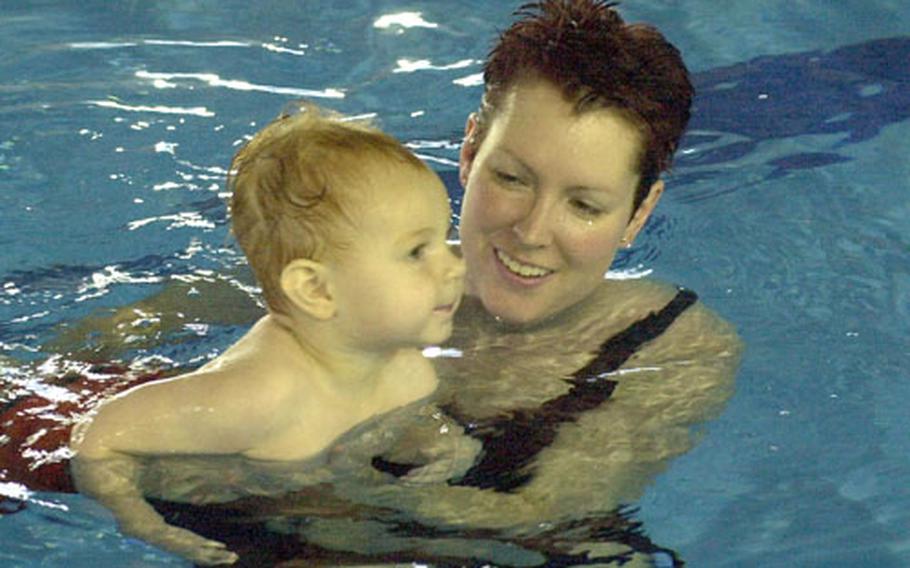 Robyn Glass swims with her 20-month-old son, Ian, at Camp Zama&#39;s Yano Fitness Center Pool on Friday. Glass took swim lessons as a child and wants her son to learn at a young age as well. (Jennifer H. Svan / S&S)

CAMP ZAMA, Japan &#8212; Bath time used to be a headache for Debbie Borno and her toddler, John Murphy, who once hated water on his head or face.

So when Borno took John to his first infant/toddler swim class at Camp Zama&#8217;s Yano Fitness Center pool, she wasn&#8217;t surprised when he acted nervous and clingy in the water, she said.

Ten months later, Borno, a spouse from Naval Air Facility Atsugi, thinks her 28-month-old son may be a fish.

The Yano Fitness Center started its infant/toddler swim program in the summer of 2002 for children ages 12 months to three years.

&#8220;It all works in to building a good foundation so when a child is physically able to learn swim strokes, it increases their comfort level in the water,&#8221; she said, noting the average child is ready to swim recognizable strokes for a certain distance between five and six years of age.

In the arms of their parents, with an American Red Cross-certified instructor leading the way, children learn how to reach and pull with their arms underwater while flutter-kicking to propel themselves forward, Bailes said. They also learn how to roll over on their backs and take a breath before being submerged.

Parents are taught how to safely swim with their children &#8212; who may be unaware of their limitations.

In class, the child gets in the pool only at the command of his or her parent, who first counts to three.

Borno said her son can go underwater, doesn&#8217;t mind being dunked, climbs in and out of the pool with ease and can blow bubbles in the water.

Army Capt. Tong Smith, a project manager with the Japan Engineer District at Camp Zama, takes an early lunch to swim the 35 minutes with his 3-year-old son, Jaehoon. Friday was Jaehoon&#8217;s third class.

The infant/toddler swim class meets for three weeks, from 11 a.m. to 11:35 a.m. Mondays, Wednesdays and Fridays. Cost is $35 per parent-child pair for the three-week session. The Yano Fitness Center also offers swimming lessons for a variety of ages, from preschoolers to adults. For more information, call 263-5656.