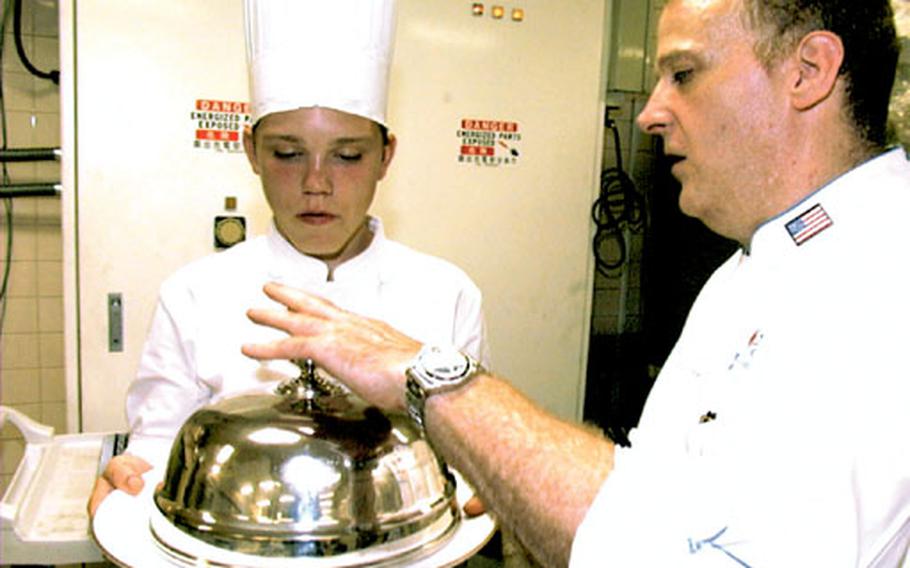 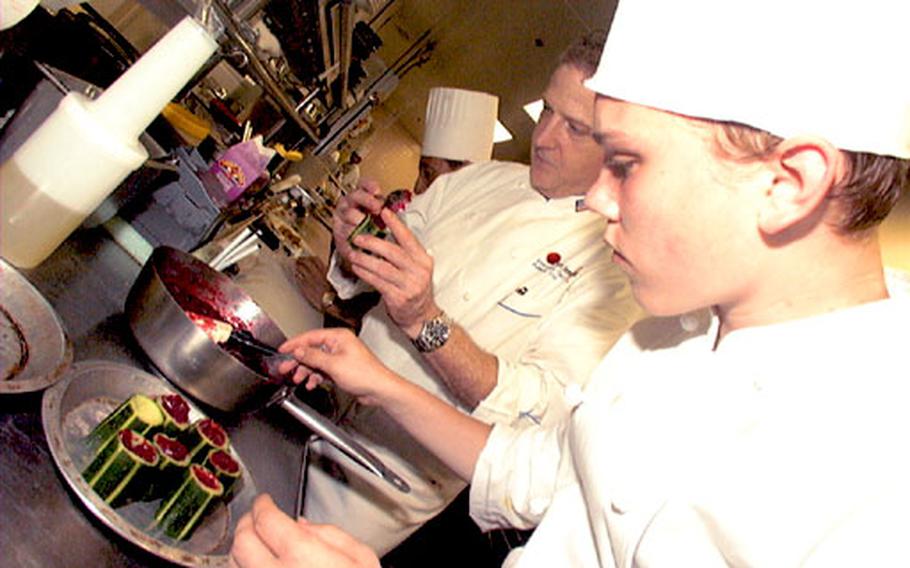 TOKYO &#8212; At 17, he knows how to braise duck, blanch green beans and whip together a yogurt dressing with a zest of lemon.

While his friends mowed lawns or flipped fast-food burgers this summer, James Vagasky toiled 40 hours a week in a toque &#8212; a tall, paper chef&#8217;s hat &#8212; at the New Sanno Hotel, a military resort in downtown Tokyo.

But after amassing 400 hours in the kitchen, Vagasky&#8217;s toughest test was Saturday night: preparing a six-course gourmet meal for eight people in Wellingtons, the New Sanno&#8217;s coat-and-tie fine-dining restaurant.

As the hungry guests arrived Saturday, Vagasky admitted he was nervous, despite about 16 hours of preparation Friday and Saturday with Yost&#8217;s help.

Donald helped Vagasky get the Sanno job after the student mentioned an interest in culinary arts.

Some of Donald&#8217;s students have worked in the New Sanno&#8217;s beauty salon, but the kitchen would be a first for a high school student, the hotel manager told Donald.

She persisted and spoke to Yost, once the executive chef of San Francisco&#8217;s Nikko Hotel.

That introduction was an eye-opener, Vagasky said: A busy commercial kitchen has little glamour but lots of hard work and long hours.

Vagasky also picked up some of the tricks any gourmet chef keeps up his sleeve. He carved ice for Sunday brunch, pearled vegetables and gave a raw potato seven sides.

From duck braising to pumpkin pur&#233;eing, Vagasky treated his guests to detailed explanations of how each dish was prepared.

But the biggest compliment to the young chef may have come from his mentor: Yost invited Vagasky back to help with the Sanno&#8217;s upcoming Escoffier dinner party, named after Auguste Escoffier, a famous French chef and cooking writer.

Vagasky plans to follow his summer internship by working at one of Atsugi&#8217;s Naval Air Facility&#8217;s restaurants during the school year&#8217;s second semester, Donald said, adding, &#8220;I hope this can be the beginning of the next chapter in making his dreams come true.&#8221;

For Vagasky, those dreams include entering a two-year culinary arts institute in Seattle and, ultimately, cooking authentic Japanese food in the States as a professional chef.

How long does it take to prepare a six-course gourmet meal?

By the time the guests arrived at 7 p.m. Saturday, the two chefs had invested about 16 hours of dicing, chopping, baking, braising, blanching, saut&#233;ing and mixing.

The results, by course and in order:

&#182; Jumbo shrimp in pastry shells covered with morel sauce. The shrimp were saut&#233;ed in butter and flamb&#233;ed in liqueur. The heavy cream sauce contained the tops of morels &#8212; a tasty wild mushroom.

&#182; Spinach and green bean salad: a light, crispy bed of greens with roasted pine nuts and a homemade yogurt dressing. Vagasky added lemon zest and sour cream to the dressing &#8212; and red chili pepper &#8220;to give it a kick.&#8221; The salad was topped with an edible flower, which Vagasky thought was a baby violet.

&#182; A moist, flourless chocolate cake, bedded on cr&#232;me Anglais, a flavored custard sauce. The cake bakes about four hours at 250 degrees Fahrenheit &#8212; a low temperature since no flour is used. Besides 14 ounces of chocolate, the recipe calls for butter, sugar, eggs, rum and vanilla. The eggs have to be beaten into a &#8220;small ribbon,&#8221; Vagasky noted to his guests.