'You have to learn to control your nerves' in filming for TV, says Robert Goulet 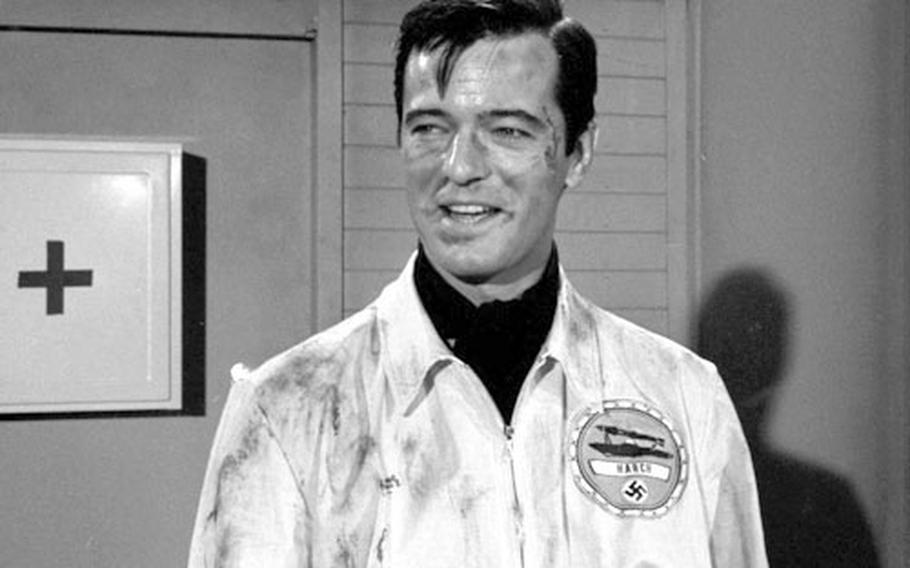 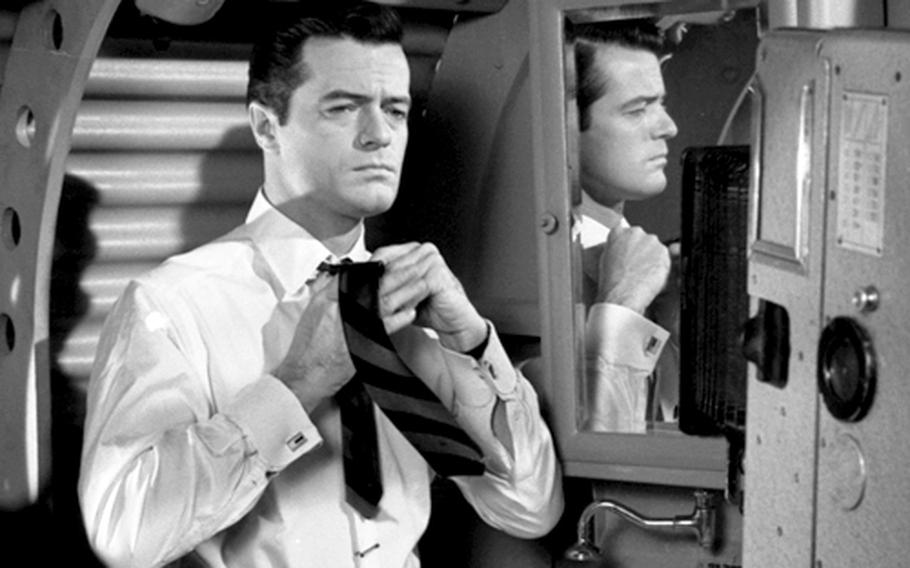 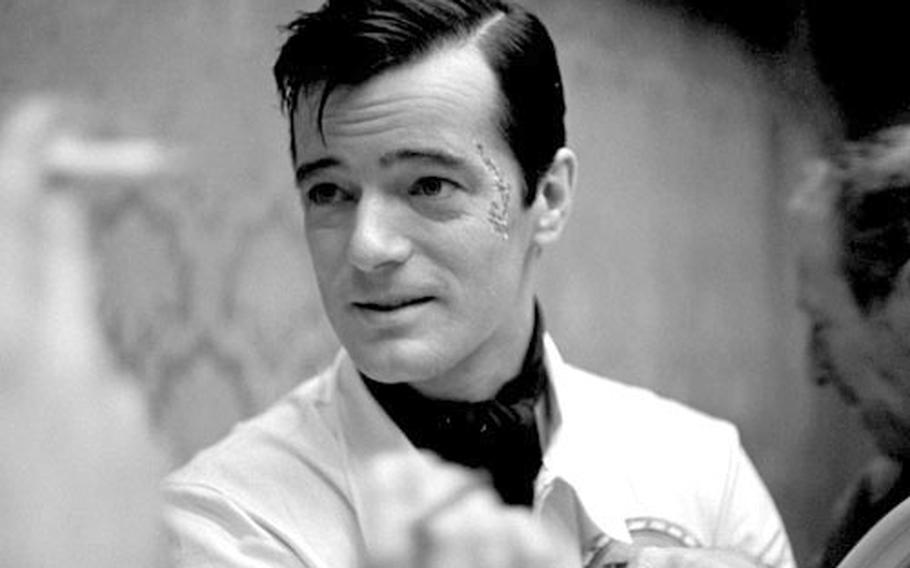 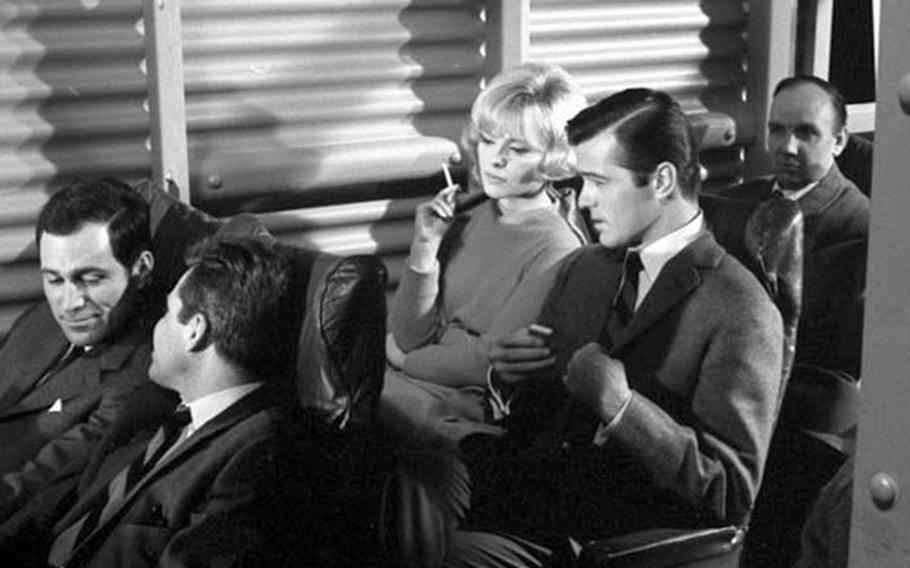 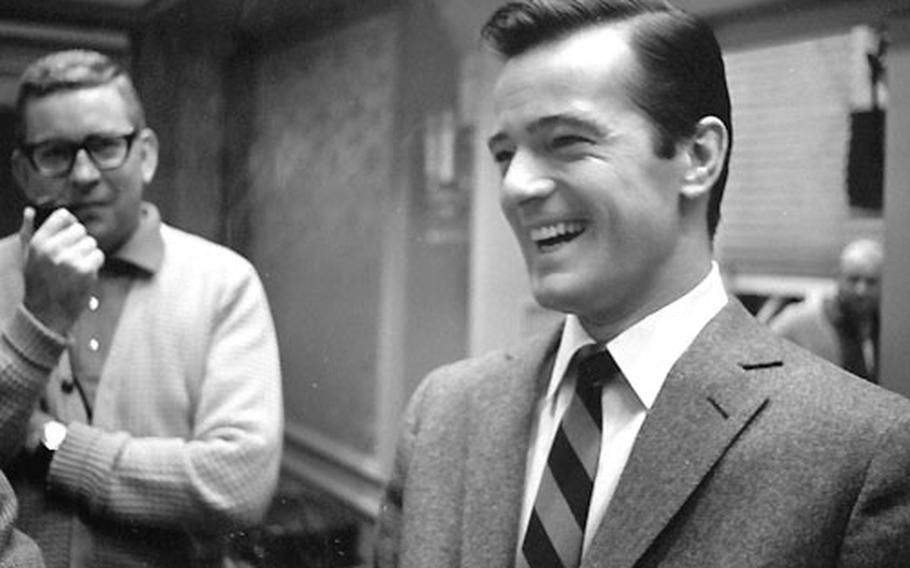 Actor-singer Robert Goulet on the set of the "Blue Light" TV series in Munich in December, 1965. (Joe Wesley/Stars and Stripes)

IN BAVARIA, the Foehn is blamed for many things.

These warm dry winds blowing from the south stir people up in curious ways and can cause them to do curious things. The Foehn (pronounced "fern" in English) has been cited in divorce cases and even as justification in murder trials.

American singer-turned-actor Robert Goulet got a taste of this phenomenon during a three-week stay in Munich to film segments of a new television series called "Blue Light."

Actors, directors and technicians as well as Goulet felt the Foehn symptoms, varying from fatigue to headaches and depression.

But the work pace, may have had something to do with the "Foehn-itis." Goulet said he worked 102 hours in one six-day period and some of the others may even have exceeded that.

The 20th Century Fox "Blue Light" &mdash; first TV series ever filmed in color in Europe &mdash; made its debut on ABC-TV in January with Goulet in the role of David March. He's an American correspondent who accepts the brand of traitor in order to penetrate the Nazi high command during World War II.

AFTER his hectic stay in Munich, including a break in Rome with his wife, Carol Lawrence, Goulet was ready for a rest when he got back to Hollywood.

Although better known as a singing star &mdash; Lancelot in the hit musical "Camelot" on Broadway plus a wide variety of TV appearances &mdash; Goulet had everyone at the main Bavaria film studio shook up with his transformation. This is his first dramatic TV series and he doesn't sing once.

Assuming the guise of a double agent, the handsome Goulet is scheduled to walk a tight rope from start to finish of the series.

The desire for actual locations and the chance to introduce German and French actors or actresses on American television led to the initial filming in Munich. Other segments are being shot in Berlin, Hamburg and Salzburg after stagings in Hollywood Some film crews remained behind and are using doubles to shoot long-range portions.

Christine Carere, petite, blond and French, has the leading role opposite Goulet in the initial part of the series. She brings a bit of realism into the series since she well remembers the day German bombers played havoc with her childhood playground and grandparents' refuge in Burgundy. .

But offstage, she coyly sums up Goulet: "It is wonderful to work with him. He walks with a his eyes on your eyes and thinks what he is doing. It is helpful to me. This carries you. He is suave, always gay and what I enjoy most is his real sense of humor."

Christine has done three movies in America, but "Blue Light" is her first TV adventure.

As for the series, Goulet says, "I'm losing money doing it."

EVEN after the hectic Munich shooting, he added, "1 took this because I wanted to be in one place for six months, of course. It develops my acting ability. Doing it every week and if it goes for three years then I'll have a capital gain."

The routine is quite a change for a singing star who just finished a 25-city tour in 28 days before coming to the Bavarian beer capital to film "Blue Light."

He brought along Carol, who is expecting a second baby around June, and son Christopher, 1&frac12;.

Mrs. Goulet is a star in her own right, having played (among other roles) the lead in "West Side Story" on Broadway. The pair maintains an apartment in New York City plus a home in Beverly Hills.

Considering his three years of supper club work &mdash; all of it singing &mdash; Goulet was asked about the difference between the romantic and musical comedy roles he knows best.

"I have grown and learned and feel I am now able to cope with it." Part of his reference was to a previous movie venture, entitled "Honeymoon Hotel," which recently made the circuit in European service theaters.

Goulet sang in that one but he frankly says, "I haven't even seen it (not even portions) and don't care to from what I've heard. I've been told it's very bad. You might get me to watch it 20 years from now if you get me stone drunk for a midnight movie. I don't think I was very good.

HE TAKES a different view of other roles &mdash; particularly the "Camelot" part which he terms his big break. Goulet has come a long way in the five intervening years.

The "Camelot" success threw him into the spotlight and he made his debut on the "Ed Sullivan Show" in January 1961. He followed on other TV shows, supper club dates, another movie, "I'd Rather Be Rich" with Sandra Dee and Andy Williams, and his own TV special "An Hour with Robert Goulet."

Goulet made his dramatic debut on television in a Kraft Suspense Theater play titled "Operation Grief." He played the role of a World War II GI suspected of being an enemy spy. That role gave him the confidence to venture deeper into the dramatic side of TV although it doesn't resemble the David March character he is playing in "Blue Light."

Born in Lawrence, Mass., Goulet was only 11 when his father died and he moved to Edmonton, Alberta, with his mother and sister to live with Canadian relatives.

He started singing with the church choir and at social functions before graduating to local pops orchestras. After a stint as a disc jockey, he was awarded a scholarship to study singing at the Royal Conservatory of Music:

Bit parts in the theater and a couple of leading roles plus smaller parts on Canadian TV followed before the big break camera the form of the "Camelot" audition:

A LOT of things have happened to the versatile Goulet since then but the role of David March gets all the attention now.

After lighting more than 60 cigarettes in one four-hour stretch &mdash; each take required him to light a new one &mdash; the 32year-old Goulet shrugged off the hectic studio life with the comment, "You have to learn to control your nerves."

At the same time, he revealed "I got only two good nights sleep during the first two weeks: Maybe it was the Foehn."

As for who is boss ins his. family, he replied, "I don't think we have a boss. But she is tougher than I am and I guess she would win the fight."

Singing in the bathtub or shower would come natural with Bob or Carol but it usually is reserved for the stage. In this respect, he adds, "Carol and I would love to do a Broadway show together but it is almost impossible to find one. I would also like to do another ... if I find one suitable."

Goulet has the misfortune (or good luck) to be one of the most handsome men in the history of show business.

He has a lean, square jaw, clear blue eyes, clean-cut even features and a muscular physique.

IN THIS AGE of Anthony Quinns, Richard Burtons and other he-man types, Goulet's appearance puts him at a distinct disadvantage. Today the Neanderthal image is all the rage.

However, there was a time when the youthful Robert Taylors, Tyrone Power and Robert Montgomerys held sway. They were handsome and no one considered it a sin.

They were also rugged men. And so is Goulet.

To break down the "pretty boy" illusion, Robert Taylor played an athlete in "A Yank at Oxford," and Power overcame his handsome visage in swashbuckling adventure films.

And it is at 20th Century-Fox, Power's old studio in Hollywood, that Goulet is currently involved in his derring-do, killing Nazis.

Does Bob think he can lose his handsome image?

"Who knows," he said. "Naturally, people think of me primarily as a singer. Well, if Sinatra can do straight dramatic stuff, there's no reason why I can't.

"There's an even better example. If actors can run for the Senate or for governor, I don't see why people should ask themselves what a singer is doing in a dramatic television show."