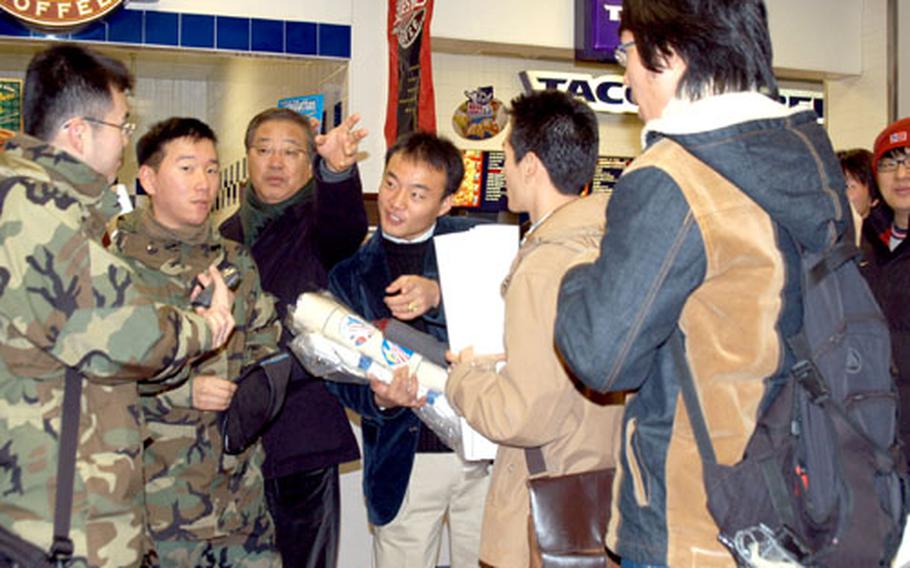 Professor Kim Seung-Hwan points to a Chinese restaurant while his students listen to advice about what they should eat in a food court on Yongsan Garrison on Friday afternoon. (Teri Weaver / S&S)

YONGSAN GARRISON, South Korea &#8212; A group of Korean college students spent a few hours on this U.S. military base Friday to learn more about why so many U.S. troops are in their country.

Many Koreans still welcome the American presence as part of protecting South Korea from any attacks from North Korea and as a means to enforce the armistice that continues more than five decades after the Korean War ended.

But many younger Koreans increasingly feel less need for the U.S. military, as their nation has grown into an international player both politically and economically, Kim acknowledged.

So, for the first time, he worked with 8th U.S. Army officials to let his students see firsthand what it looks like inside Yongsan Garrison. And he gave the U.S. Army a chance to explain its history in Korea from a U.S. point of view.

On Friday, the students listened to a briefing in Korea from Joe Sellen, the host nation specialist for 8th Army. Then they watched two films that talked about the Korean War and the casualties and successes for both South Koreans and Americans.

Afterward, the students got a chance to taste America: They took a trip to the Townhouse, a food court on Main Post that is home to Burger King, Taco Bell and Popeyes.

Park said he thinks U.S. Forces Korea should stay in the country, even if the two Koreas reunite. He said his country&#8217;s military force, diplomatic stance in the world and even its economy are tightly tied to the U.S. troop strength here.

He admitted that many other college students his age would have opposing views. &#8220;But most of my friends would agree with me,&#8221; he said through an interpreter.