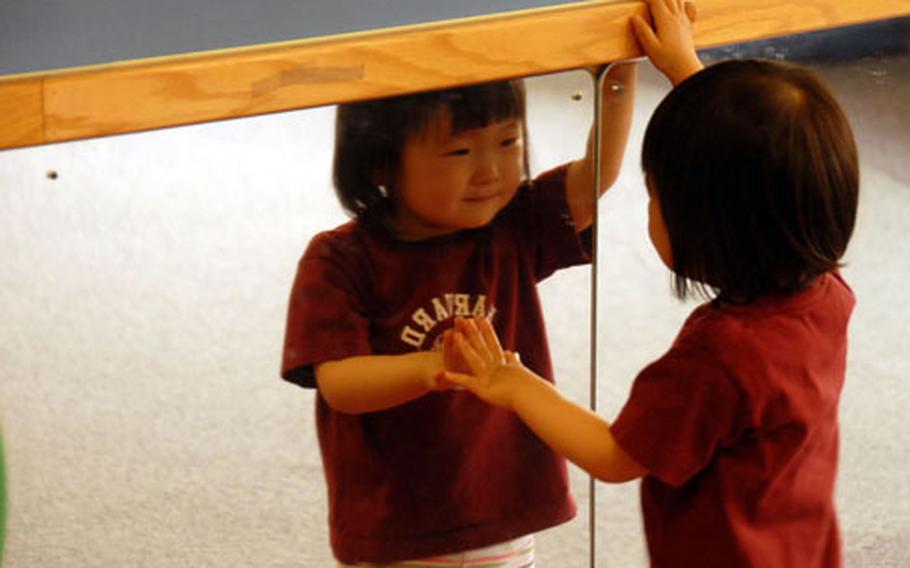 Lindsay Choe, 2, smiles at her reflection in a mirror at the Child Development Center at U.S. Army Garrison-Yongsan. The garrison commander was to sign a covenant on Saturday offering new benefits to CDC employees. (Ashley Rowland/Stars and Stripes)

Or to go to work at a job that starts as early as 5:45 a.m. Or to make lesson plans for a group of toddlers and infants.

At U.S. Army Garrison-Yongsan, finding enough employees to care for its growing number of families has been an ongoing struggle for Child, Youth and School Services.

In an attempt to hire and keep child-care workers, garrison commander Col. Dave Hall was to sign a covenant on Saturday that outlines new benefits for current and new CYSS employees. They include:

A $1,000 signing bonus for new full-time staff members.A $1,000 bonus for part-time employees after they complete a year of employmentA $500 bonus for employees who recruit new employees, payable after the new employee has worked for three months.A 50 percent reduction in child-care fees per child for employees with children.Full or half-tuition on courses related to child care.Support for an exception to policy for employees who need a second personal vehicle to work for CYSS. The sponsor&#8217;s unit must approve the exception.Self-sponsored employees who have served at least three months can register their own cars to support their work at CYSS.Pay adjustments of 3 percent to 10 percent during annual appraisals.Eskeletha Dorsey, school liaison officer, said it&#8217;s difficult to keep employees because of the high turnover of servicemembers on the peninsula, among other reasons.

Some families are being reunited after a deployment to Iraq or Afghanistan, so those spouses don&#8217;t want to begin working.

"They&#8217;re just getting back together," Dorsey said. "They want to build on their home life."

Melody Hill, director of the Child Development Center, said Yongsan is unusual because it has a lot of officers and higher-ranking enlisted troops who make enough money their spouses don&#8217;t have to work.

Many people don&#8217;t like the early morning hours, Hill said, and the work is harder than most people realize.

"Sometimes you think you can do this because you have your own kids, but it&#8217;s not that simple," she said.

CYSS employees typically earn $9 to $11 an hour. The need for employees is acute at CDC, where officials want to hire about seven employees. When fully staffed, the CDC has 56 workers.

Hill said the need for workers will become critical this summer, when the first wave of families arrives under a new tour normalization policy. U.S. Forces Korea hopes to roughly double the number of command-sponsored slots to 4,320 by Sept. 30, 2010, and eventually allow half the troops in South Korea to bring their families with them.

Employee Leslie Gordon said many people want to work but can&#8217;t afford it.

"They&#8217;ve had to pay so much in child care. It doesn&#8217;t make sense to work to pay for child care," said Gordon, who has three children and said the employee discount on child care made it easier for her to take the job.

The fair will be held from 11 a.m. to 2 p.m. at the Child Development Center parking lot and includes games, information booths and prizes.