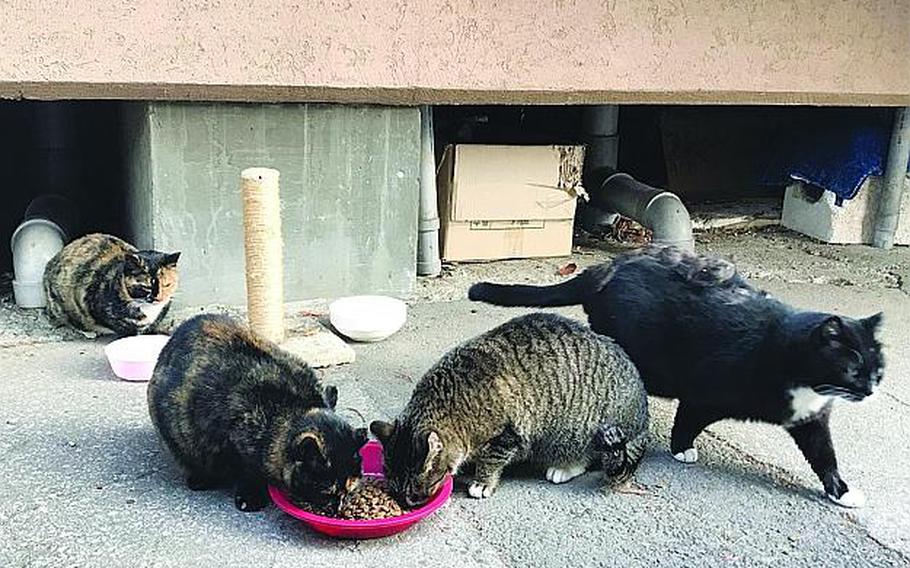 Officials at Yongsan Garrison in Seoul, South Korea, have estimated that the Army installation has about 70 stray cats, and they want to contain the problem before that number multiplies in the spring. (Kim Gamel/Stars and Stripes)

YONGSAN GARRISON, South Korea — U.S. military officials plan to launch a program aimed at slowing the growth of the stray cat population on this Army installation in the heart of Seoul.

The program — known as trap, neuter, release, or TNR — was deemed necessary after the number of cats spiked as the military prepares to close Yongsan. Last year, U.S. Forces Korea moved its main headquarters from Yongsan south to Camp Humphreys.

“TNR is the humane and potentially effective approach for stray and feral cats by which community cats are humanely trapped … brought to a veterinarian to be spayed or neutered, vaccinated, ear tipped, and then returned to the outdoor location where they were found,” according to the new policy issued this month.

Kerri Burrows, a 38-year-old military spouse with training as a vet technician and some two decades working in animal welfare, will spearhead the effort.

She noticed the problem after moving to Yongsan with her husband in July and persuaded garrison officials to change the policy so she could release the cats back where they came from after the neuter operation.

Her next task will be to persuade people who have been secretly feeding the cats, including several South Koreans who work on the garrison, to trust and help her. She’s also working with a local shelter to organize veterinarians to perform the surgeries.

“Now it’s really just hitting the streets and trying to connect with the feeders,” she told Stars and Stripes on Thursday.

In the past, the Department of Public Works would capture the strays, then take them to the vet clinic on Yongsan, where they would be placed in an adoption program or euthanized, depending on their condition.

But the situation has been in limbo since veterinary services have largely moved to Humphreys, leaving the garrison with nowhere to take the strays. South Korea has animal shelters, but they are already crowded.

“There’s going to be some difficulty because the process for a long time has been that the cats get trapped and then euthanized,” Burrows said. “I need to show people that we’re choosing the more humane option.”

Once connected, Burrows will establish a feeding schedule that will help her trap the cats, which will begin a three-day process comprising the surgery and providing recovery time before they are returned to their outdoor location.

“After that, I’m going to be instructing the people to wean the cats off the food because we are vacating this property, so we can’t have the cats dependent on the food,” she said.

The policy prohibits random feeding or tipping traps to prevent their capture.

Yongsan garrison spokesman Wes Hayes said people will be advised to contact Burrows to gain authorization to participate in the program. Her local cell phone number is 010-5693-6605 and her email is kduren1@hotmail.com.

“She obviously has a lot of expertise in this area and we’re grateful that Kerri is volunteering that expertise to assist (the garrison) in sterilizing the feral cat population,” he said.

Officials estimate the garrison has about 70 stray cats, although it’s impossible to be certain. They want to contain the problem before that number multiplies when kitten season begins in the spring.

The policy also requires a strict registration process for people bringing pets to South Korea, addressing concerns that the problem was caused at least in part by people leaving cats behind.

It’s not known how many of the cats have been abandoned or lost versus those that are endemic to the base, which has been occupied by the U.S. military since shortly before the 1950-53 Korean War and was home to the Japanese imperial army before that.

What is certain is that the cats have become more visible and emboldened as Yongsan Garrison shrinks as the military prepares to return the land to the South Korean government, which is expected to turn it into a park.