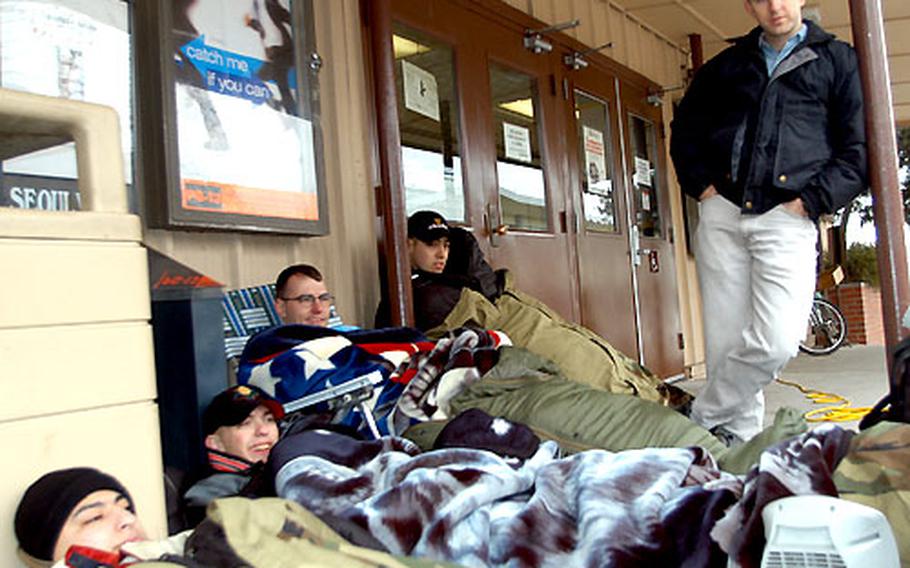 He showed up at Yongsan Garrison&#8217;s Balboni Theater 30 hours before the 6 a.m. kickoff of Monday&#8217;s Super Bowl party so he could be the first in line, hoping for a chance to win a 61-inch television.

He tried last year, showing up about 18 hours in advance. There was no one in line, so he went and grabbed lunch. When he returned, four other people were waiting and he lost his chance.

The morale, welfare and recreation contest rules state the first four people in line for the party join the 17 weekly football contest winners in a chance to win the TV.

The 21 contestants must guess the winning team and pick the score. The person with the closest guess wins the TV.

But Simon better come up with a better plan next year.

And Sgt. Christian Burga, bundled up in a sleeping bag, was the fifth wheel.

The other soldiers were happy Burga was there, since he showed up carrying a TV. That, with Lobello&#8217;s collection of almost 200 DVDs, made the waiting time much easier.

The five said they were getting a lot of attention from passers-by Sunday morning, some of who called them crazy.

And as rain turned into snow flurries Sunday, the soldiers claimed they were staying warm.

Simon, who doesn&#8217;t have a TV, said his girlfriend called to ask where all the blankets were.

&#8220;She told me that it seemed like the Super Bowl is more important than she is,&#8221; Simon said as his friends laughed.

Deaton said he didn&#8217;t decide to jump in line until Sunday morning.