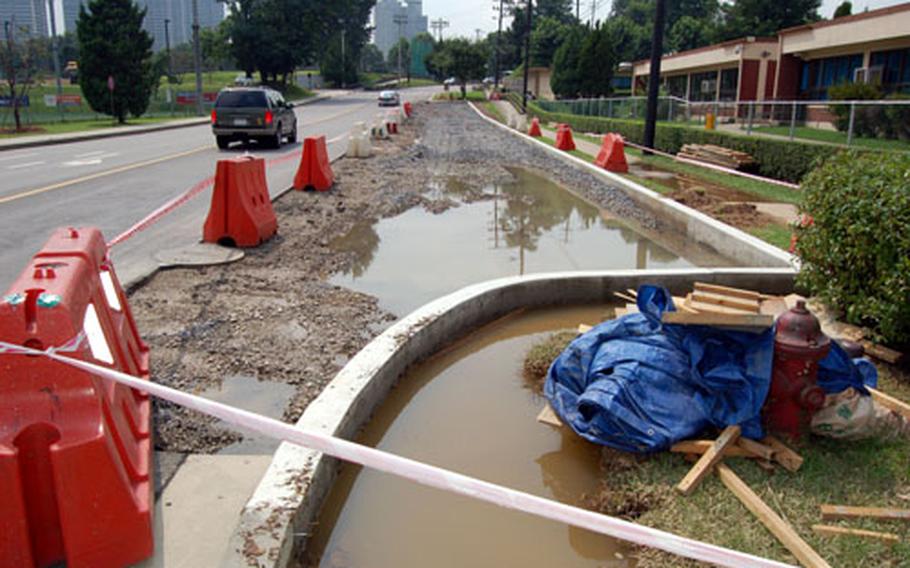 Heavy rains and standing water have made conditions to wet to complete the expansion of a parking lot and drop-off point at Seoul American Elementary School by the August 15 deadline. (Jimmy Norris / S&S)

YONGSAN GARRISON, South Korea &#8212; Recent heavy rains will not stop the construction at Seoul American Elementary School from being completed by the Aug. 25 start of the school year, U.S. Army Garrison-Yongsan officials said.

An expansion to the drop-off point in front of the school and an expanded parking lot next to a nearby soccer field were slated for completion Friday.

Showers and thunderstorms throughout the week, however, left construction equipment sitting idle next to pools of standing water Wednesday.

The ground, officials said, is too muddy to pave, and the project deadline has been pushed to Aug. 21.

"At this point, the garrison commander is focused on getting ready for the start of school," McNally said.

Park Kyung-hee, a weather forecaster for the Korea Meteorological Administration, said Wednesday that Seoul had received almost four inches of rain in as many days. Forecasts on the U.S. Forces Korea Web site predicted continued rain and possible thunderstorms through Friday.

The projects were among several started when former U.S. Forces Korea commander Gen. B.B. Bell doubled the number of command sponsorships in South Korea, setting Department of Defense Dependent Schools-Korea up for an influx of more than 628 new students, most of whom were bound for Seoul.

In addition to the parking and drop-off expansion, a new two-story, eight-classroom building outside Seoul American High School&#8217;s Falcon Gym was completed July 31.

An expansion to the middle school and elementary school cafeteria that added 144 seats was completed Monday.