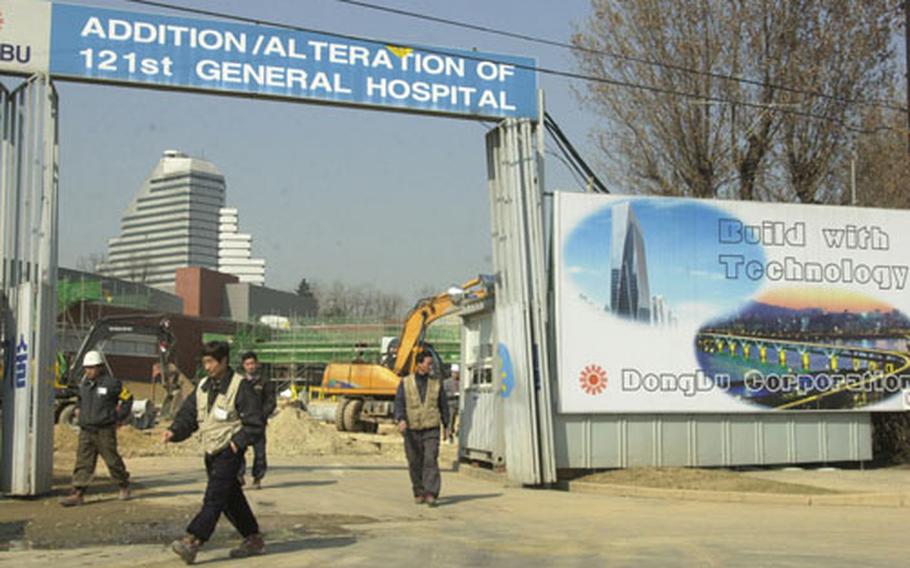 Construction workers at the 121st General Hospital on Yongsan Garrison go on their lunch break. Military officials say they&#39;re going ahead with the final phase of a $70.2 million renovation despite an agreement to move all forces off Yongsan by 2007. (Joseph Giordono / S&S)

Construction workers at the 121st General Hospital on Yongsan Garrison go on their lunch break. Military officials say they&#39;re going ahead with the final phase of a $70.2 million renovation despite an agreement to move all forces off Yongsan by 2007. (Joseph Giordono / S&S) 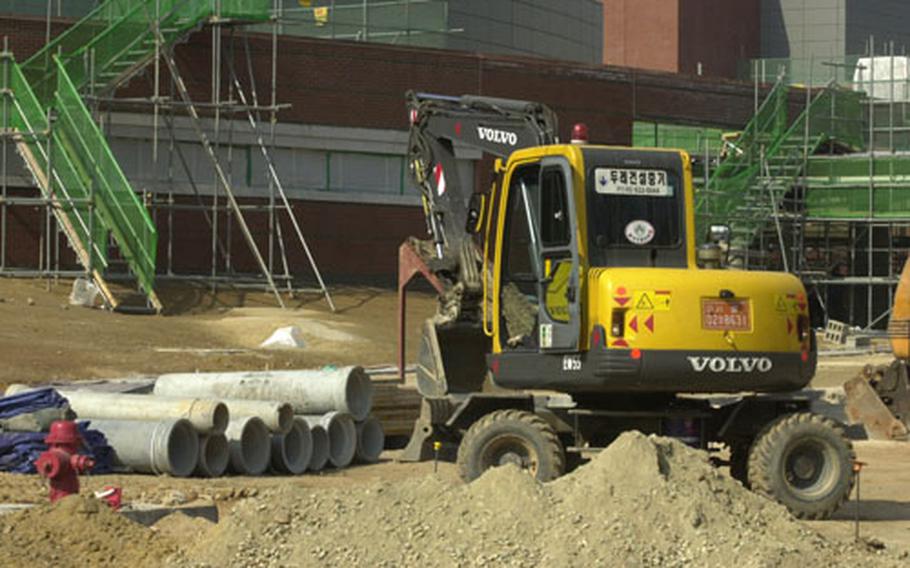 Military officials say they&#39;re going ahead with the final phase of a $70.2 million renovation to the 121st General Hospital despite an agreement to move all forces off Yongsan by 2007. (Joseph Giordono / S&S)

YONGSAN GARRISON, South Korea &#8212; U.S. Forces Korea is forging ahead with a $70.2 million, three-phase renovation of the 121st Hospital despite pledges to South Korea&#8217;s government to move all U.S. forces from the base by 2007.

A $24.5 million contract is expected to be awarded in the next few weeks for the renovation&#8217;s second phase, said Lt. Col. Steve Boylan, 8th Army public affairs officer. Unlike some base construction projects, this one would be funded entirely by the United States, officials said.

&#8220;This critical project continues to enhance our readiness, our quality of life and moves us another step closer to ensuring that we are making Korea an assignment of choice,&#8221; Boylan said in a statement. He declined to address whether the hospital could be kept and used by the U.S. military even if forces moved from Yongsan Garrison.

Leaving some forces behind at the post had been discussed earlier with South Korea&#8217;s government. Financial details have to be agreed upon before the latest proposal is made final but it would have all U.S. forces leaving except a few military liaisons working close to South Korea&#8217;s Defense Ministry.

The first $35.4 million phase of the hospital renovation will be completed this year, Boylan said. The last estimated $10.3 million phase is scheduled for completion in 2007, the target year Yongsan&#8217;s 7,000 soldiers are to move to a hub at Osan or Pyongtaek.

In the seventh round of talks earlier this month, U.S. and South Korea officials were unable to agree how to finance the move, an issue that halted move plans dating back to the early 1990s. Yongsan Garrison is the largest U.S. military base in South Korea; its 800 acres host four major military commands.

In light of the moving plans, USFK has halted new construction at Yongsan Garrison and bases housing the 2nd Infantry Division, which is pegged to consolidate into two hubs at camps Red Cloud and Casey, then move south of the Han River. No timetable has been set for that move.

Built about 1961, the 121st Hospital is a critical but aging component of the U.S. military in South Korea. Although more than a dozen troop medical clinics are on U.S. installations on the peninsula, the seriously injured or ill usually are taken by helicopter to the 121st.

Camp Humphreys &#8212; the base where most U.S. troops from Yongsan are expected to move &#8212; has only a troop medical clinic.

Among the dozens of improvements scheduled for the 121st are modern operating rooms, outpatient clinics and four labor and delivery suites, Boylan said.

Plans to build a new major U.S. medical facility have been started and stopped at least twice over the last 20 years.