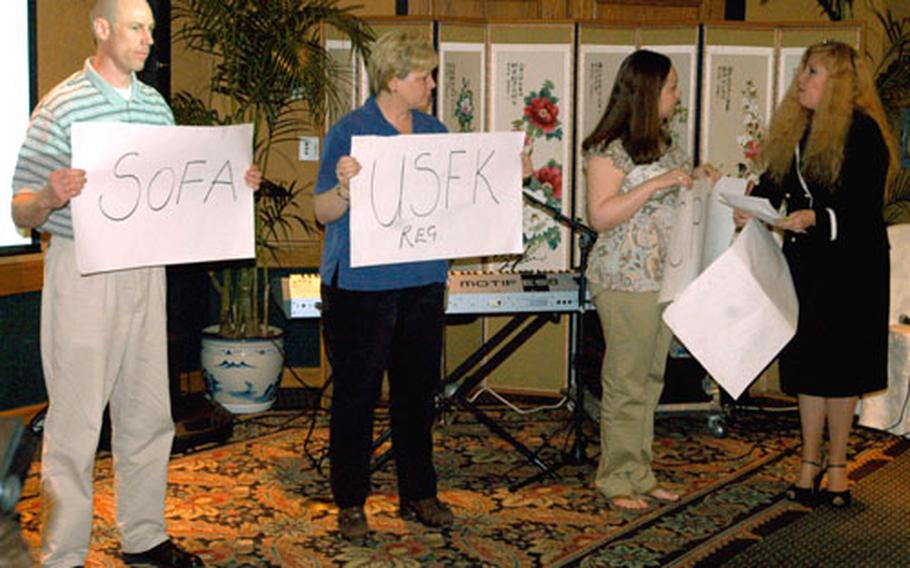 AFAP delegates perform a skit to illustrate the disparity between U.S. Forces Korea regulations and the status of forces agreement regarding the hiring of third-country spouses of U.S. citizens for non-appropriated funds positions. (Jimmy Norris / S&S)

YONGSAN GARRISON, South Korea &#8212; Laughter filled the Dragon Hill lodge&#8217;s Naija Ballroom last week at what might have otherwise been a dry event.

The mood was light, but the issue &#8212; along with others presented &#8212; was serious. And the commander who could exert influence to do something about them was in attendance.

Present&#8217;s conversation was part of a skit his group performed to illustrate an issue they wanted to bring to the attention of the command during the 2007 Army Family Action Plan Conference.

In this case, Present&#8217;s group highlighted need for non-command-sponsored families to have access to Tricare Prime medical insurance.

The skit was part of a briefing that marked the end of the four-day AFAP conference in which delegates from across the peninsula identified community problems and proposed solutions.

Lt. Gen. David Valcourt, 8th U.S. Army Commander, was on hand to address the concerns, his reactions ranging from grave to jovial.

&#8220;If that&#8217;s the most significant issue you can come up with I&#8217;m feeling pretty good,&#8221; he joked after one group suggested changing uniform regulations to allow the use of black umbrellas.

A local council of colonels will review the issues to determine which can be handled locally &#8212; and which should be forwarded to the Department of the Army AFAP conference planned for Dec. 3 to Dec. 7.

Valcourt hears issues presented at conferenceSEOUL &#8212; Several issues were raised during the Korea Army Family Action Plan conference. Below is each issue, a suggested fix, and 8th Army commander Lt. Gen. David Valcourt&#8217;s immediate reaction as they were presented to him.

The issues will be studied locally and those requiring further chain-of-command approval will be forwarded to the Department of the Army AFAP conference in December.

Suggestion: Authorize Tricare Prime free for non-command sponsored family members and retirees or allow them the option of paying for the additional coverage.

Valcourt: Said this was an important issue as many young servicemembers who bring non-command-sponsored family members to South Korea don&#8217;t know they have to switch from Prime to Standard care and may inadvertently end up defrauding the government.

Issue: The use of umbrellas while in uniform in garrison.

Suggestion: Re-evaluate the regulation forbidding the use of umbrellas in uniform.

Valcourt: Laughed, saying there was a lot of pride in being able to get rained on and still accomplish the mission.

Issue: Family members who are required to carry ration-control cards complain that the extra piece of identification is troublesome to carry and poses possible identity theft risks.

Suggestion: Discontinue the use of ration-control cards in favor of keeping the information on family member identification cards.

Valcourt: Showed interest in the suggestion, saying there could be many benefits to doing away with the ration-control cards.

Issue: Third-country spouses &#8212; those not U.S. or South Korea citizens &#8212; say they are prevented by regulation from holding non-appropriated funds positions on base.

Suggestion: Re-evaluate the USFK regulations and status of forces agreement to see if changes are possible.

Valcourt: Called the issue contentious &#8211; but not impossible to address.

Issue: Family members are not given priority employment preference on base, resulting in financial hardships for military families.

Suggestion: Re-evaluate the USFK regulations and SOFA agreement to see if changes are possible.

Valcourt: Called this issue another contentious one, but stressed it isn&#8217;t impossible to address.

Issue: There are no paid intern programs for high school seniors and juniors.

Suggestion: Initiate an intern program for the students.

Valcourt: Called the issue a valid concern and suggested that teens volunteer in on-base workplaces in the meantime.

Suggestion: Allow families to use the per-student allocation for DODDS schools in the form of vouchers to offset private school tuition or for the use of home-school supplies

What can AFAP do?

SEOUL &#8212; The Army Family Action Plan is a 22-year-old program in which military community members &#8212; including soldiers, retirees, family members and civilian employees &#8212; can bring quality-of-life issues to their major commands and the Department of the Army.

Created by Army spouses, AFAP has addressed more than 600 issues, initiated more than 100 legislative changes in Congress and almost 150 changes to Army policy since its inception.

There are 95 AFAP issues now being addressed at the Department of the Army level &#8212; including suggestions for permissive paternity temporary duty, distribution of Montgomery G.I. Bill benefits to family members and video surveillance of childcare centers.

In South Korea, an increase in dust storm warnings and widened Camp Casey sidewalks came about as the result of AFAP conferences.