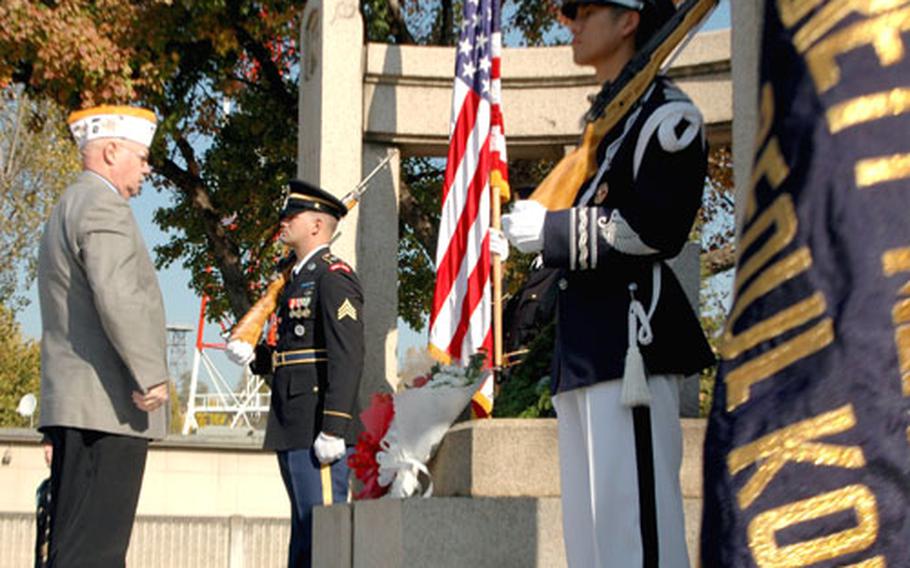 More than 100 people on U.S. Army Garrison-Yongsan attended a ceremony Tuesday morning in honor of Veterans Day. The remembrance marks Nov. 11, 1918, the end of World War I. (Teri Weaver / S&S)

His grandfathers both served their country. One was in the Navy in World War II. The other survived a wound at Heartbreak Ridge during the Korean War and earned a Bronze Star.

And his dad was a Marine in Vietnam during the Tet Offensive.

Gardner, 20, was killed in action in September 2004 in Anbar, Iraq. Someone blew up the truck he and six other Marines were in. It was a month before Gardner was due home, the Orange County Register reported at the time.

"It never goes away," said Vickey McCleary Chalmeau, his mother, after a Veterans Day ceremony Tuesday morning on Yongsan Garrison.

Chalmeau was one of about 100 family members, friends, troops and veterans who paid tribute during the ceremony at the 8th Army War Memorial on main post.

Chalmeau "honors us by being here today," said U.S. Forces Korea commander Gen. Walter Sharp. "It is families like hers that have kept America free."

Chalmeau, who lives in Manila, Philippines, and was visiting South Korea with her husband, said she just wanted a chance to attend the ceremony and never expected to be recognized.

Others attending the ceremony met with old friends and paid their respects. Some stopped, watched, and prayed as they were running errands on the holiday. The day marks Armistice Day, the end of World War I on Nov. 18, 1918, though it became a federal holiday in 1954.

Scotty McMillan served from 1958 to 1979, including three tours in Southeast Asia. Now he is a flight instructor for the Army at K-16, a base on the outskirts of Seoul. For the past 14 years, he&#8217;s attended the Veterans Day ceremony at Yongsan.

McMillan said he sometimes has lunch with friends after the ceremony. On some days, he said, he takes a walk.