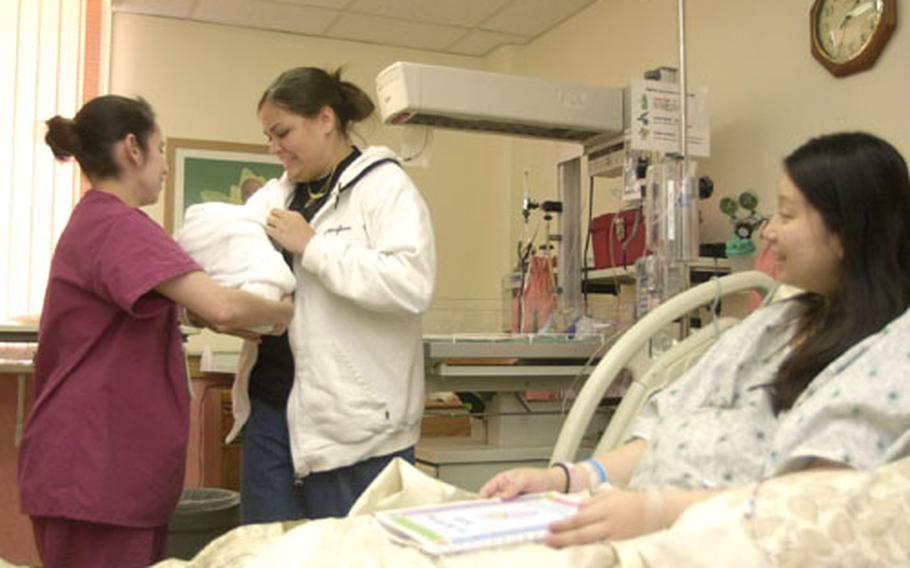 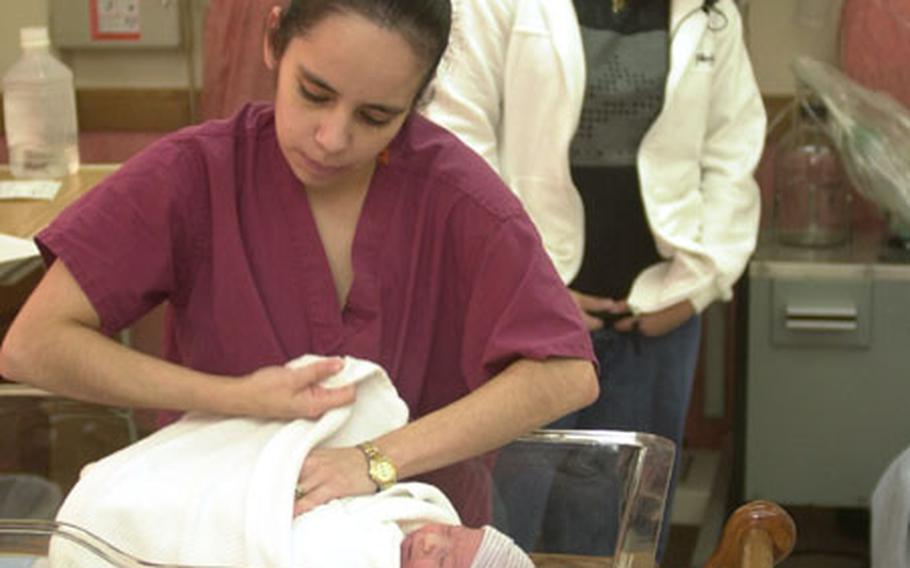 Capt. Valerie Huh, a nurse at the 121st General Hospital at Yongsan Garrison, tends to a baby as Jio Bruce looks on. (Joseph Giordono / S&S) 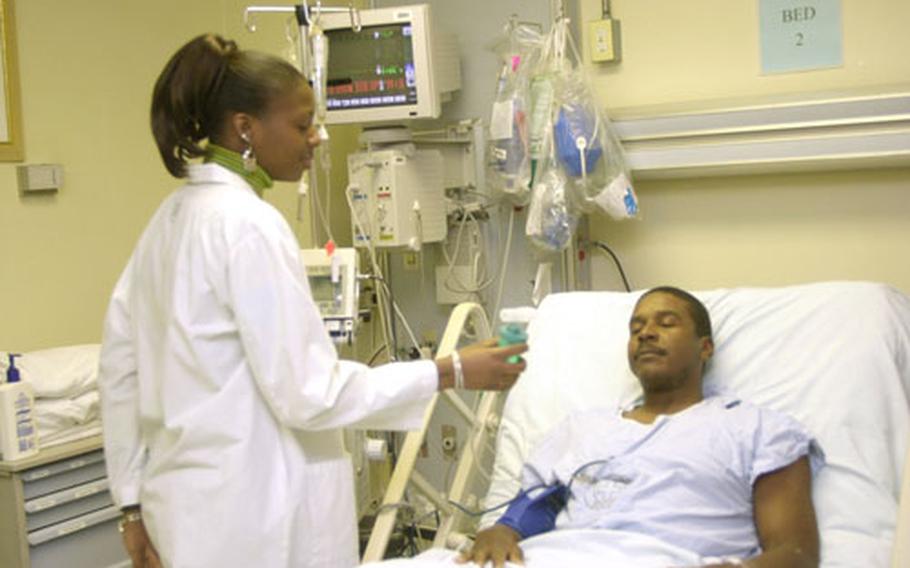 &#8220;That&#8217;s more of what I would like," said Bruce, who is headed off to Central Missouri State University on an athletic scholarship in the fall.

The program, sponsored by the 38th Parallel Nurses Society, wrapped up Friday after three days of intensive work by the students and the nurses. Bruce, along with fellow seniors Michele Bronson, Alicia Davis, Herald Oertwig, Ronisha Shivers and Elizabeth Meyer, worked a 6:15 a.m. to 3 p.m. shift each day.

Each student was assigned a mentor in each of six nursing departments &#8212; intensive care, emergency room, operating room, women and infant care, radiology and the multi-care unit. They would spend the morning working with one nurse, then the afternoon with another, eventually seeing each of the units.

The point, said program coordinator 1st Lt. Ann Norby, was to give the students a broad and realistic experience.

&#8220;We wanted them to get information and allow them as much as possible to do what their sponsors do,&#8221; Norby said. &#8220;There wasn&#8217;t any actual patient care, but they were closely involved in observation and doing small tasks that a spouse might help out on during an appointment.&#8221;

While other student groups have gone on &#8220;career day&#8221; hospital tours, this was the first time an intensive mentoring program was undertaken, Norby said.

"We gave them specific objectives. We also wanted to make them as independent of each other as possible, keep them by themselves with their sponsors,&#8221; said Norby, who also serves as vice president of the 38th Parallel Nurses Society.

The 38th Parallel Nurses Society has its roots in the Korean War, when more than 5,000 nurses from various countries tended to troops fighting under the United Nations. According to the tale, the association began when a Turkish nurse asked an American nurse about an aseptic technique.

That interaction led to the creation of the United Nations Nursing Service, which later evolved into the 38th Parallel Medical Society Nurses Association. In 1970, the group was renamed the 38th Parallel Nurses Society, which today serves to promote professional and collegial relations between U.S. and Korean military and civilian nurses.

Capt. Jennifer Easley, an intensive care nurse, said the high school mentorship program was a rare opportunity for the students.

Chief among the benefits were seeing &#8220;the hours the nurses work and the conditions they work in, especially in a military environment,&#8221; said Easley, who transferred to South Korea about three weeks ago, after a tour in Iraq with the 28th Combat Support Hospital.

On Friday afternoon, Shivers was working with Easley in the intensive care unit, helping the staff nurses care for a man with a respiratory problem.

As for Bruce, she learned something else about medicine in the operating room.