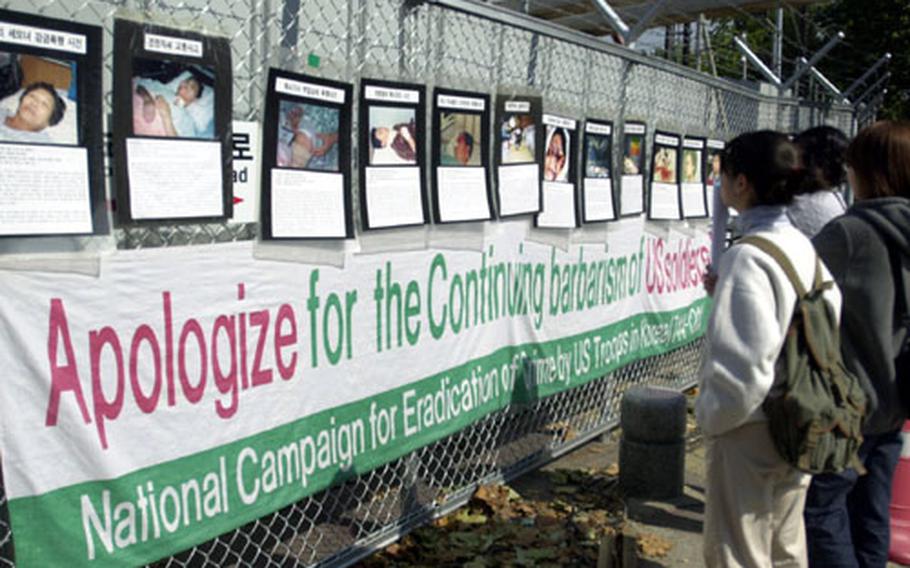 Passers-by stop to look at photos and stories about South Koreans who were allegedly victims of crimes by U.S. servicemembers. After 10 years of peaceful protests, a South Korean protest group focusing on the crimes has called it quits. (Joseph Giordono / S&S)

Passers-by stop to look at photos and stories about South Koreans who were allegedly victims of crimes by U.S. servicemembers. After 10 years of peaceful protests, a South Korean protest group focusing on the crimes has called it quits. (Joseph Giordono / S&S) 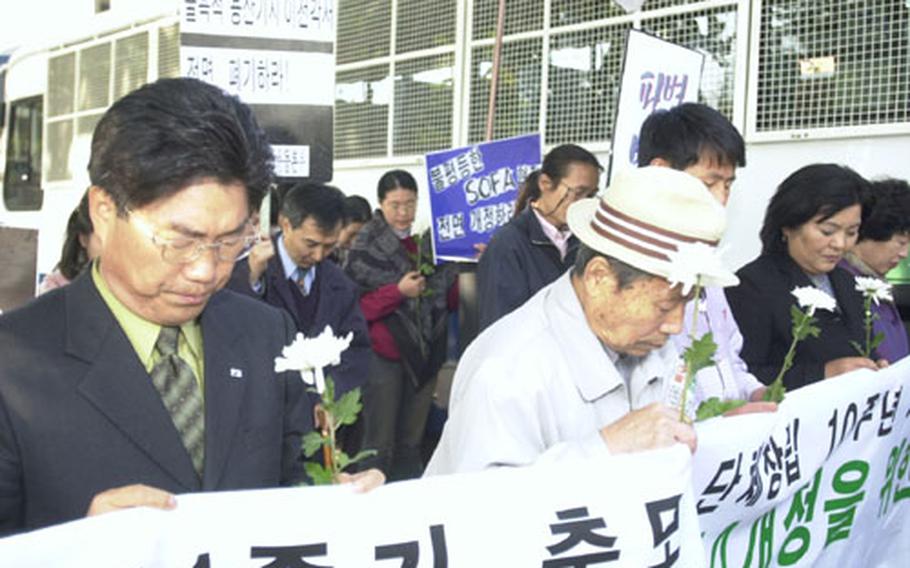 Holding memorial flowers for alleged victims of crimes by GIs, members of a protest group pause for a moment of silence during the final gathering by the group, which has spent ten years focusing on the issue. (Joseph Giordono / S&S) 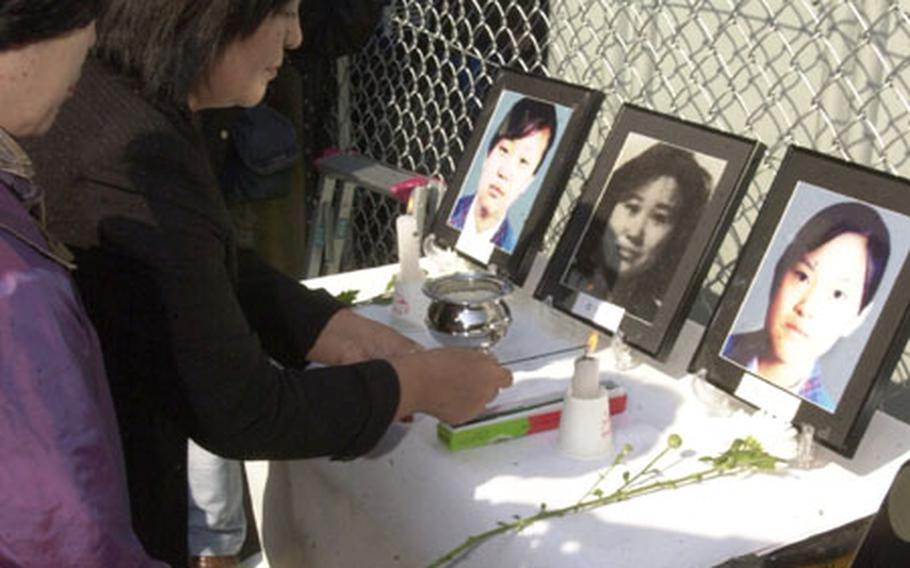 YONGSAN GARRISON, South Korea &#8212; For the last 439 Fridays, peaceful protesters posted gruesome signs on the red-brick walls and fencing outside the base here, documenting crimes allegedly committed by U.S. soldiers.

But after almost 10 years of sign-waving, chanting and bullhorn speeches, the sidewalk mainstay concluded its final rally Friday outside Yongsan Garrison. Moon Dae-gol, the group&#8217;s chairman, cited financial problems and the dilution of power as reasons for its demise.

U.S. soldiers and other passers-by often snuck a peek at the placards, which included horrific crime-scene photos of Koreans allegedly victimized by U.S. soldiers, while passing from post to post. Posted by the The National Campaign for Eradication of Crime by U.S. Troops, the protest took place almost every Friday afternoon.

&#8220;When we first started working, Korean people didn&#8217;t even try to know about America and American soldiers. And they couldn&#8217;t think independently. I suppose we have worked pretty hard and contributed a lot for Korean people to see this country with an independent point of view.&#8221;

The demonstrations focused on revision of the Status of Forces Agreement, the 1966 accord that laid down rules for criminal jurisdiction and how the U.S. military operates in South Korea. Calling the rules unfair, the group sought more power over U.S. soldiers who are accused of committing crimes in South Korea.

Ko You-kyong, the group&#8217;s secretary, opened the final protest by saying: &#8220;I feel so sorry that we have to finish this rally, but we have done and accomplished so many things, and there is no regret.&#8221;

A chrysanthemum was given to everyone who participated Friday as a commemoration of Korean crime victims from the last decade, organizers said.

Holding his flower and waiting to pay respects near three victims&#8217; photos, Kim Pan-tae said the moment was bittersweet.

&#8220;Their work has helped Korean people wake up to see and judge various kinds of issues such as [the] Iraq troop dispatch issue and [the] U.S. base relocation issue,&#8221; said Kim, who oversees the People&#8217;s Action for Reform of Unjust ROK-US SOFA Agreement, another protest group.

Oh Se-hyun, a senior at Kyunghee University, became interested in the U.S.-South Korean relationship and has often participated in rallies since 1996.