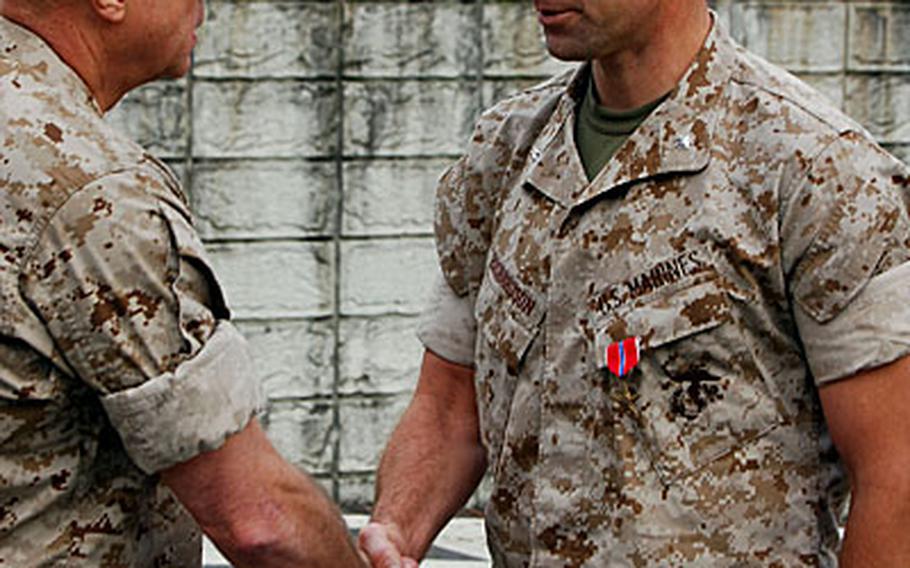 Maj. Gen. Frank Panter (left), commander of Marine Forces Korea, shakes hands with Lt. Col. David Richardson after presenting him with a Bronze Star on Wednesday in front of the Marine Forces Korea headquarters building at Yongsan Garrison. Richardson received the award for actions in Iraq in 2006. (Jimmy Norris / S&S)

YONGSAN GARRISON, South Korea &#8212; U.S. Marines gathered Wednesday at Yongsan Garrison to watch as one of their own received one of the U.S. military&#8217;s highly distinguished awards.

Lt. Col. David Richardson, 42, received a Bronze Star with a &#8220;V&#8221; device for actions in Iraq, while serving as an adviser to the commander of a battalion of Iraqi soldiers from January through August 2006.

According to the accompanying citation, Richardson was awarded the honor for &#8220;heroic achievement in connection with combat operations while serving as an Advisor to the Commanding Officer of 3d Battalion, 2d Brigade, 1st Iraqi Division.&#8221;

While noting Richardson was repeatedly in &#8220;direct combat with anti-coalition forces,&#8221; it further praised him for his skills in establishing Iraqi forces, organizing and documenting their progress, while providing logistics support and ensuring they operated &#8220;with minimal dependency&#8221; on U.S. troops.

He added that fighting alongside Iraqi soldiers was problematic because of language differences and being unfamiliar with the soldiers he was working with.

Richardson also led a team of 11 Marines, assigned to a military transition team, whose mission was to help Iraqi forces prepare to take control of security in their country.

Richardson and his team worked in Ramadi, Fallujah and Anbar Province.

He said everyone on his team received either a Bronze Star or a Navy Commendation Medal, all of them with the V device.

Richardson, an artillery officer who makes his home in Wilmington, N.C., said he hopes to go to Afghanistan after finishing his time in Korea.