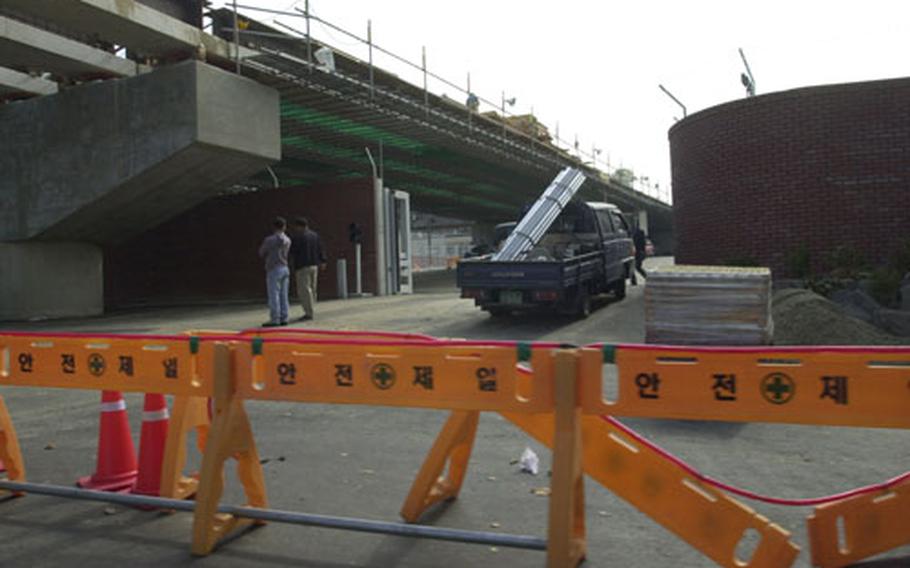 The gate has been closed since earlier this year as contractors continued work on a two-lane overpass connecting main and south posts. The $7.9 million bridge project should be completed by the end of January, said Gloria Stanley, public affairs officer for the Far East District Army Corps of Engineers.

But while the overpass construction continues, the vehicle entry underneath will reopen for use.

On south post, drivers can access the base from off post by a road on the right side of the bridge, Stanley said. Traffic will leave post on the Dragon Hill side of the bridge. Gate #5, which is directly across the street and leads to Main Post, will remain open to pedestrian traffic only.

The overpass bridge was designed to ease vehicle congestion between posts and improve traffic flows in front of the base. Drivers and passengers will no longer have to show identification cards, as the posts will be connected. The bridge is also getting bicycle and pedestrian paths.

Bridge construction and the subsequent closing of the two most heavily trafficked gates at Yongsan has caused traffic snarls that officials have tried to regulate. Government-vehicle operators are banned from driving between gates 7 and 8, the two gates on the west end of post toward Itaewon.