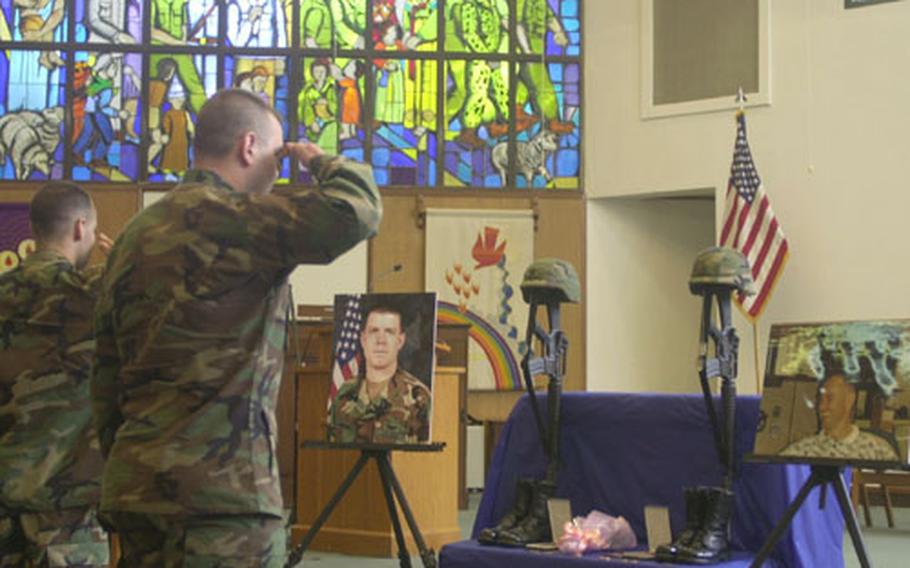 Colleagues of Capt. Kevin M. Norman and Chief Warrant Officer David W. Snow pay their final respects at a Friday memorial service for the pilots, who were killed in a Tuesday crash near Camp Humphreys, South Korea. (Joseph Giordono / S&S)

Colleagues of Capt. Kevin M. Norman and Chief Warrant Officer David W. Snow pay their final respects at a Friday memorial service for the pilots, who were killed in a Tuesday crash near Camp Humphreys, South Korea. (Joseph Giordono / S&S) 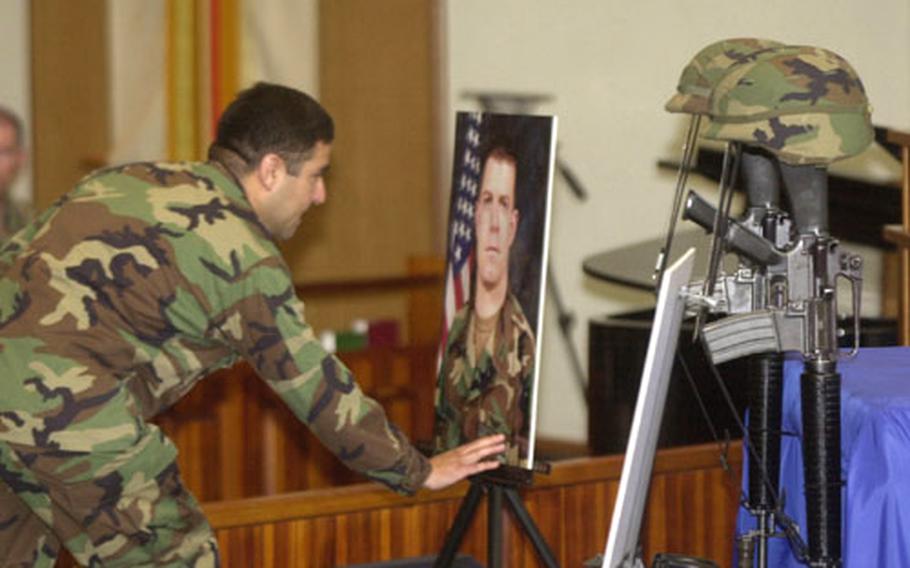 YONGSAN GARRISON, South Korea &#8212; Two Army pilots who apparently steered their doomed aircraft away from a populated area moments before crashing were remembered Friday as the &#8220;very essence of duty, honor and country.&#8221;

Friday morning, more than 500 friends and colleagues packed Yongsan&#8217;s South Post Chapel to pay final respects. In a tearful ceremony, the pilots were eulogized as consummate professionals, great friends to their fellow soldiers, and unsung heroes.

&#8220;Today is our day to say thank you, Kevin and David, for the way you brightened our lives and the way you helped share and carry the load,&#8221; said Lt. Col. Hodges Anthony, commander of the 1st Battalion, 52nd Aviation Regiment, of which the pilots were a part.

Anthony and others spoke from podiums flanking portraits of Norman and Snow; between the pictures stood the traditional memorial of boots, helmet and rifle.

At the end of the ceremony, scores of soldiers and friends paused and saluted the memorial display; many left notes, unit coins and flowers. Several more gently touched their hands to the photographs, breaking into tears.

During the ceremony, colleagues of Norman and Snow shared their memories of the pilots with the crowd.

MacKenzie remembered Snow as a religious family man with a great sense of humor. He remembered how Snow &#8212; when going on mid-tour leave &#8212; offered his car and other help to a unit newcomer.

Snow, from Mount Airy, N.C., was serving his third tour in South Korea. He is survived by his parents, his wife, Amy, and his daughters Emily and Olivia.

Norman was remembered as a great leader with a dry, self-deprecating sense of humor.

Bergsmith also recalled how Norman loved to tell stories. One of his favorites, he said, was the story of how Norman saved a drowning cat during one of South Korea&#8217;s notorious monsoon-season storms, only to be bitten by the same cat.

Anthony also read a statement on behalf of U.S. Forces Korea commander Gen. Leon LaPorte and his wife, who were unable to attend the ceremony.

&#8220;They were model aviators and stand-up officers,&#8221; the statement read. &#8220;I know there is little we can say to help during this most difficult time, but rest assured that we are united with all of you in our thoughts and prayers.&#8221;

The cause of the crash is under investigation. A team from the U.S. Army Safety Center in Fort Rucker, Ala., is in South Korea investigating, officials said.