Yongsan Garrison is on its way to becoming a park for South Koreans. Here are the next steps. 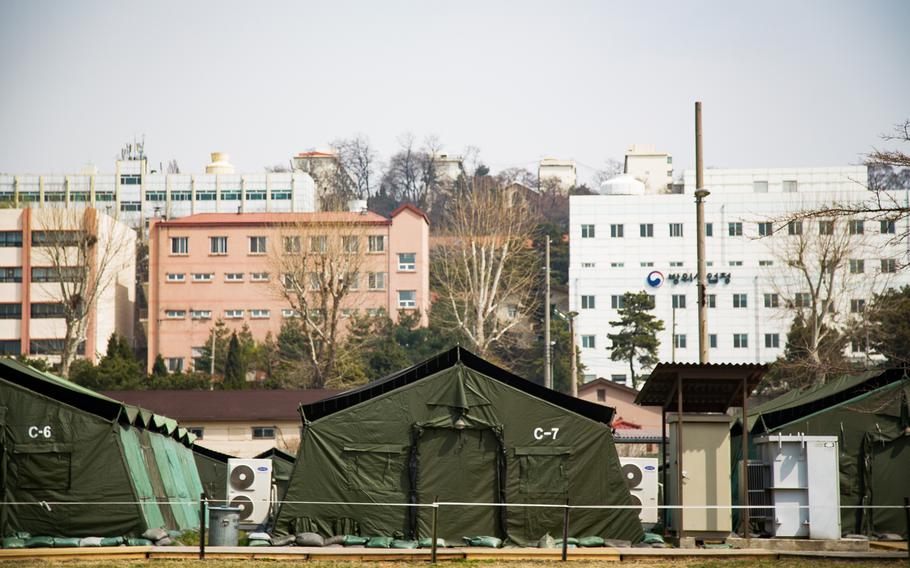 YONGSAN GARRISON, South Korea — With South Koreans eager for a new park, the U.S. military is stepping up efforts to vacate a major Army garrison in the heart of Seoul after most troops, families and civilian workers moved south as part of a long-delayed relocation plan.

The population of Yongsan, which has been occupied by the Army since the 1950-53 Korean War, has plunged from a peak of nearly 30,000 to 12,500 since the three main commands — U.S. Forces Korea, Eighth Army and 2nd Infantry Division — moved their headquarters to Camp Humphreys in the rural area of Pyeongtaek.

But it’s not easy to close a military base that’s spread over about 630 acres, including sub-installations, in one of the trendiest areas of the South Korean capital.

Environmental studies must be done amid concerns about oil spills and other contamination, although no recent problems have been reported.

The military also must balance the need to maintain a connection to the Defense Ministry in Seoul as well as training operations and a field artillery unit and other forces that will remain near the border with North Korea.

Garrison commander Col. Monica Washington said the process of returning the land to the South Korean government isn’t likely to begin until July 2020 at the earliest.

Next milestone The next major milestone will be late next year when the Brian Allgood Community Hospital is due to close as its namesake hospital on Humphreys opens. That will trigger the closure of the commissary, the post exchange, the gas station and other facilities.

“There will be a … very minute footprint here on Yongsan, although we will still have families that we will have to support here,” Washington said in a recent interview in her office near a pedestrian overpass that crosses a busy thoroughfare that bisects the base.

She estimated it will take six or seven months to do the closure process, including moving equipment and turning off utilities, once most of the garrison is vacated in December 2019.

The military plans to maintain a small section for residual forces from the Combined Forces Command, USFK, the garrison and supporting agencies on the side of the base known as South Post. Dragon Hill Lodge, a resort-style military hotel, is planning to continue operations despite reports to the contrary. The U.S. Embassy also has residential housing in the area, although it will eventually build a new compound on a corner of the sub-base known as Camp Coiner.

Americans also will maintain a presence at the K-16 air base outside Seoul.

About 28,500 U.S. servicemembers are stationed in South Korea, which remains technically at war with the North after their conflict ended in an armistice instead of a peace treaty.

Early transition In the meantime, officials are looking at ways to expedite the transition by identifying areas that could possibly be returned early to the South Korean government. One of those is the driving range and recreational fields that are in the shadow of the National Museum of Korea, Washington told residents in announcing several changes Friday during a town hall at Yongsan.

“We’ve been given the direction and guidance to look at ways we can accelerate the transformation process,” said Washington, who assumed command in June.

“We are starting with the steps necessary to do that,” she said, stressing no time frame has been set.

The effort is also driven by the need for some of the equipment from Yongsan to open new facilities at Humphreys, including an 18-hole golf course.

The driving range and the separate Sung Nam golf course, which was outside the main base, will close this month.

The once-thriving commissary has been reduced to half its previous size as the population shrinks. And the garrison has done a traffic survey to prepare for closing some of the 12 access gates that remain open, which will allow the redeployment of guards.

Seoul American Elementary School and Seoul American Middle High School will close at the end of this academic year, according to Department of Defense Education Activity. The move had been widely expected but wasn’t officially announced until Friday.

Washington said she won’t be the last American in charge of Yongsan, saying “when I leave here in June of 20 we will still be in the midst of closing procedures and things like that so there will still be another commander after me.”

Yongsan, which was a Japanese colonial base until the end of World War II, has long offered Americans the comforts of home, including fast-food restaurants, schools, a bowling alley and a hospital behind concrete walls lined with concertina wire.

The contrast became more striking as Seoul grew from an impoverished war-torn city to an Asian economic powerhouse. Yongsan has become prime real estate as the Itaewon neighborhood outside morphed from a seedy part of town to a popular nightlife district.

Park preparations South Korea plans to turn the tree-lined base, which has several historic sites and low buildings that stand out from the Seoul skyline due to a height restriction, into a park.

Some activists have posted petitions on the presidential website calling for the area to be used for affordable housing, but the suggestion has gained only a handful of signatures and the Ministry of Land, Infrastructure and Transportation is sticking by plans for the park.

An official with the Ministry of Land, Infrastructure and Transportation said it’s impossible to know when construction on the park will begin or how long it will take, mindful of the fact the project has been plagued by delays in the relocation plan, which was part of a 2004 agreement and was originally supposed to take place in 2008.

But government and city planners are beginning to seek public opinion on the development. The ministry also is working with the garrison to conduct bus tours starting this month on the installation, which is otherwise closed to most South Koreans. The groups undergo security checks and stop at only a few historic sites, including a former Japanese stockade.

“Yongsan Garrison is coming back into the arms of our people after 114 years so we have to prepare for the Yongsan park in earnest now. It doesn’t make sense to build rental housing there,” Kim Hyun-mee, the minister of Land, Infrastructure and Transportation, was quoted as saying after she took one of the bus tours.