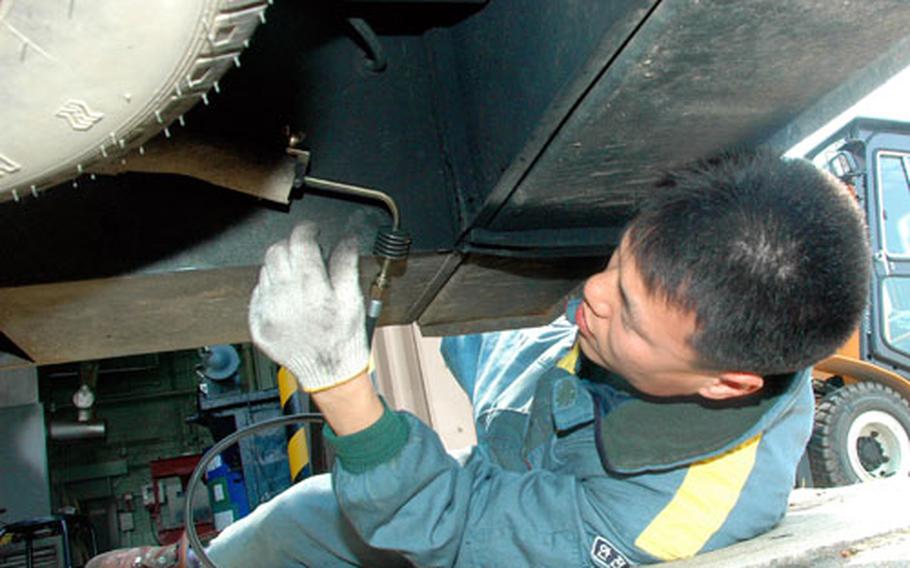 The effort comes after a March 9 offer from the Yongsan-gu mayor&#8217;s office to perform testing for garrison vehicles for free.

The offer was declined, but officials from U.S. Army Garrison-Yongsan said out of respect for local pollution concerns they would use their own facilities and personnel to perform additional testing to meet Seoul&#8217;s standards.

Garrison spokesman David McNally said units responsible for their own maintenance still have the option for local testing, but he added tenant units could get the same service for free at garrison facilities with fewer logistical and language difficulties.

USAGY officials said they were already performing emissions tests once a year when the offer came.

&#8220;We have always performed inspections,&#8221; said Yongsan transportation officer Keli&#8217;i Bright. &#8220;Previously emission inspecting only occurred as part of annual inspections. With the new emphasis on air quality we will inspect vehicles during their semi-annual inspections as well.&#8221;

The garrison is responsible for about 1,000 nontactical vehicles, with about 700 of its own and 300 belonging to tenant units with agreements for garrison personnel to perform maintenance. Officials said they plan to have all vehicles inspected, and those with deficiencies corrected, by June 30.

Seoul&#8217;s emission standard permits no more than 220 parts per million of pollutants.

So far, 41 of about 400 vehicles that have received additional testing have shown deficiencies. Most are Gallopers, Bongo trucks and Grace vans made in the mid to late 1990s.

Bright estimates between 80 and 100 vehicles, about 10 percent of the fleet, will fail emissions tests.

Failures are generally the result of using the wrong fuel in vehicles, Bright said.

The ones that are failing were designed to use diesel but up until a year ago had been fueled with jet propellant 8 under the Army&#8217;s &#8220;one fuel for battle&#8221; concept, Yongsan logistics director Lydia Grohmann said.

&#8220;While this posed no issue for tactical vehicles which were built with hardened mechanical parts, it did negatively affect commercial vehicles, which were not designed for that fuel,&#8221; Grohmann said. &#8220;Unlike diesel, JP-8 lacks the lubricity needed for diesel designed engine parts to endure.&#8221;

In April 2006, diesel was supplied to all Army garrisons in South Korea. Nevertheless, many injectors need to be replaced over the previous years of wear and tear, Grohmann said.

Those that fail will be prohibited from use until new fuel injectors are installed.