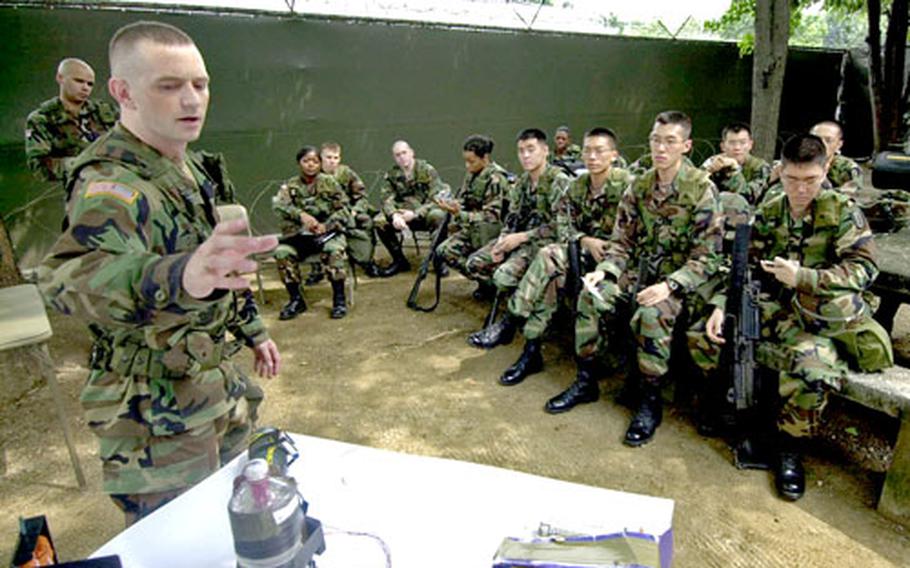 Company commander Capt. Allan Goode said the global war on terror and &#8220;everything going on in Iraq&#8221; led Army leaders to direct that additional combat-skills training be given. His company belongs to the 41st Signal Battalion, 1st Signal Brigade.

That his soldiers, &#8220;computer geeks, if you will,&#8221; spend most of their time in Korea on desk jobs means the training is even more important, Goode said.

He praised Staff Sgt. James Gilbert, a former infantryman, for researching and conducting the class as preparation for a convoy live-fire exercise in November.

The 26-year-old Gilbert served as a Bradley Fighting Vehicle gunner in Kosovo in 2000 where, he said, he experienced the threat of homemade bombs firsthand. Gilbert said that experience, plus a lot of research, helped him prepare. He said Friday&#8217;s class was the first phase of a three-part crawl, walk and run learning process.

Gilbert, who now works with the company as a senior information systems analyst, said passing the knowledge on to his coworkers is important.

The homemade bombs are killing and injuring soldiers &#8220;every single day&#8221; in Iraq, he said.

His noncommissioned officer in charge, Sgt. 1st Class Kanelos, agreed on how important the training was to the troops.

He said Korea is the first duty station for many of the soldiers in the class, but when they rotate they&#8217;ll find themselves in &#8220;units of action,&#8221; meaning deployments to the war on terror.

The soldiers sat at picnic tables as Gilbert showed the mock-ups of homemade bombs.

Soldiers were schooled in the best methods to search for the explosives and how they should react &#8212; including detailed instructions on cordons, entry into suspect areas and filing reports &#8212; in a real-world situation.