Yongsan colonel’s Harley is rare, so he’s an uneasy rider 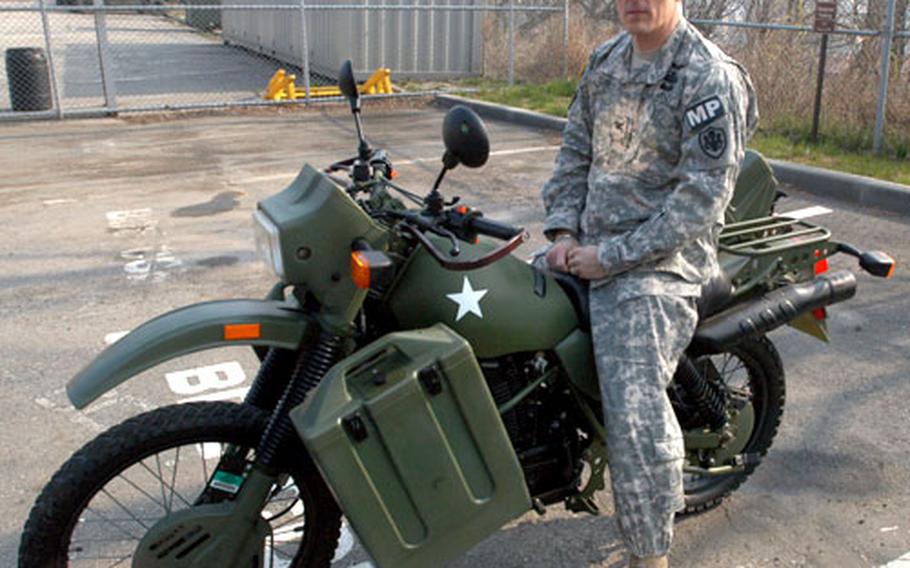 Col. Clayton Cobb’s Harley-Davidson MT-500 is one of only 500 made in Harley-Davidson’s failed attempt to sell motorcycles to the U.S. military. Many of the bikes are in museums and private collections. Cobb is with U.S. Forces Korea and stationed at Yongsan Garrison. (Jimmy Norris / S&S)

Olive-drab, rustproof and capable of holstering an M-4 carbine, Col. Clayton Cobb&#8217;s Harley-Davidson MT-500 definitely looks like something that might come packaged with an action figure, though its history is a bit more full-sized.

According to Cobb, his motorcycle was one of only 500 made by Harley-Davidson in 1999 and 2000, when the company bought the rights to build the bike&#8217;s engine from a British manufacturer in a bid to re-enter the business of selling motorcycles to the U.S. military.

After the U.S. Army decided not to buy the bike, which was designed for scout and courier duties, Harley-Davidson ceased production and sent the motorcycles it had made to museums, dealers and private collectors.

Cobb&#8217;s bike, No. 15 of the 500 made, wound up with a New Orleans Harley-Davidson dealer, then with a private collector in Michigan.

Cobb said the Army paint and the lack of chrome make it resistant to rust.

Cobb said his bike has received a lot of attention around Yongsan.

Despite the novelty of having a military-looking Harley, Cobb said owning the bike has a downside.

Many parts, when they&#8217;re available, must be ordered from Britain. Others have to be made on special order.

So, Cobb, who has been riding Harleys for more than 12 years, has considered selling the motorcycle, though he&#8217;d prefer to see it end up in the hands of someone who understands its value.