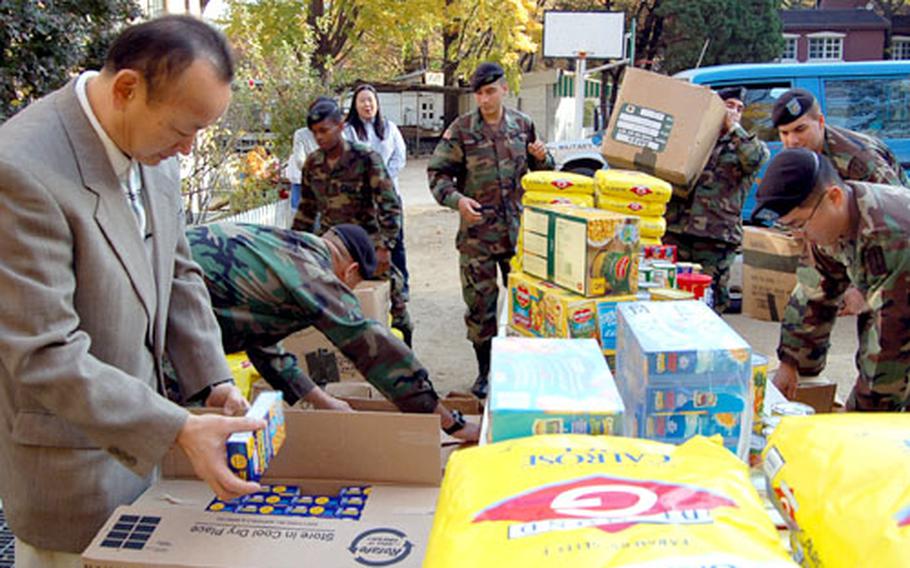 Park Heung-sik, director of Namsan Orphanage in Seoul, looks through some of the donated food as soldiers from the 94th Military Police Battalion arrange the goods. (Courtesy of U.S. Army)

YONGSAN GARRISON, South Korea &#8212; A one-day food drive at the commissary here last week brought in enough rice to supply a local orphanage for two months, according to a soldier with the 94th Military Police Battalion.

All told, soldiers from the 142nd Military Police Company and the Headquarters and Headquarters Detachment &#8212; all part of the 94th Battalion &#8212; collected more than 2,000 pounds of food for the Namsan Orphanage at the Nov. 5 food drive.

The collection has become an annual event for the battalion, just one of many events its soldiers do each year with the orphanage in Seoul, Niedergall said Wednesday during a telephone interview.

The orphanage is home to 56 boys and girls, ages 5 to 18. Throughout the year, soldiers visit the orphans to play with them, show them their K-9 companions and throw them a Christmas party. This year, the orphans again will be invited to Yongsan Lanes for a bowling and pizza party just before Christmas, he said.

On Nov. 5, the soldiers collected canned goods, boxed juices and rice for the children.