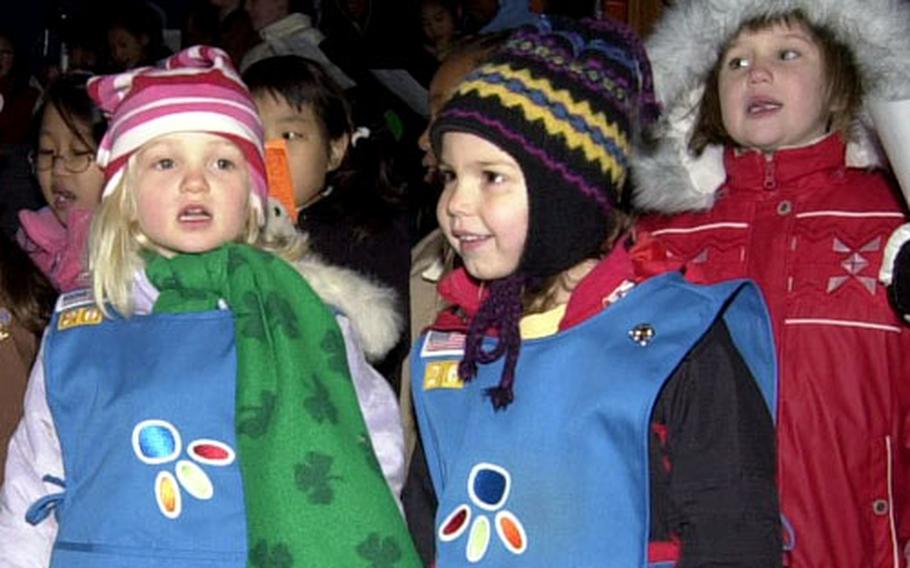 Local choirs and Scouts entertained the crowds with traditional holiday music in both English and Korean.

Stephens thanked the people who worked long hours to make the event happen.

&#8220;Special thanks to the directorate of public works, Korean Service Corps and MWR (Morale, Welfare and Recreation) personnel who spent long hours to build this spectacle of lights,&#8221; he said.

To those away from home for the first time, Stephens said, &#8220;it would be our pleasure to be your family this holiday season.&#8221;

Yongsan Garrison, home to Area II, U.S. Forces Korea, the Combined Forces Command and the United Nations Command, should be a spot to visit for the holiday, Farrulla said. &#8220;I would like to encourage everyone across the peninsula to come out and enjoy the decorations,&#8221; he said.

The decorations are to turned on from 5 to 10 p.m. daily.

Toward the end of the ceremony, Santa Claus and his elves arrived aboard a fire engine, sending a roar through the crowd. Younger children jostled to get closer to Saint Nick, who slowly moved toward the warmth of the fire station truck bay.

With Elizabeth wrapped in a pink winter jacket, Torrens stood at the back of the crowd, checking out the action. &#8220;She likes Santa from a distance but doesn&#8217;t want to be up close,&#8221; he said.

He said the event was great for his family, who recently moved to join him in South Korea.

Inside the fire house, members of the 8th Army band played Christmas tunes, families lined up for a chance of a photo with Santa and MWR personnel handed out free food and hot chocolate.

And 4-year-old Ashley Clifton waited in line with her family for an opportunity to tell Santa exactly what she wants for Christmas this year: a Barbie doll.