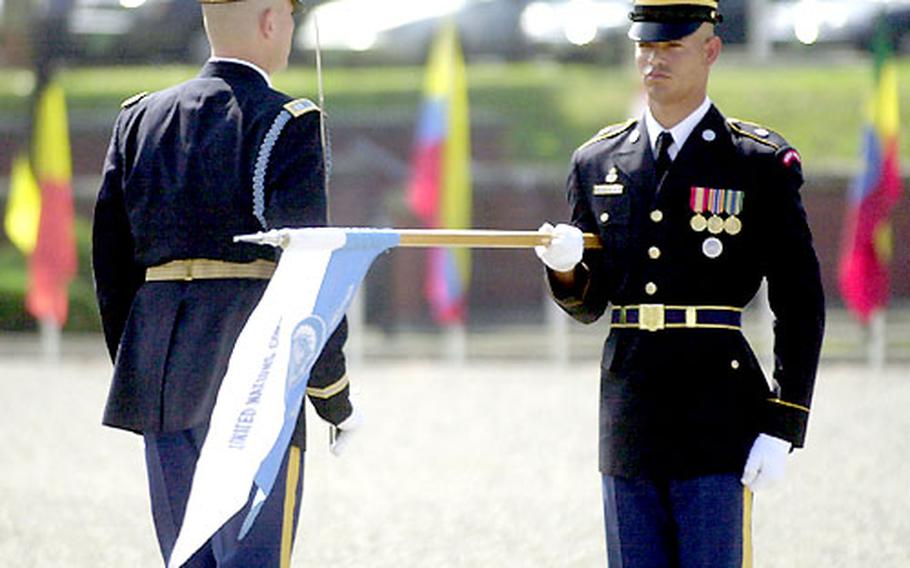 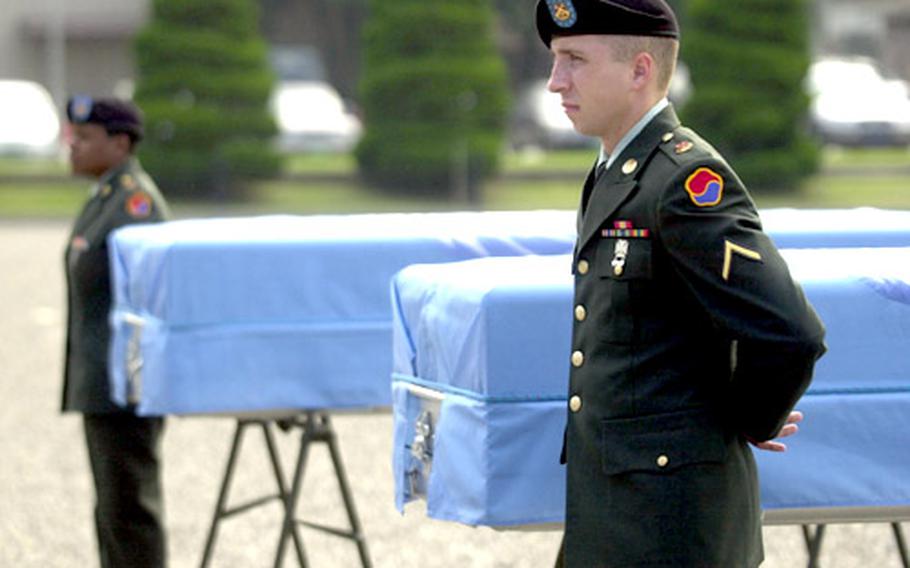 Soldiers stand guard next to the remains of US servicemembers killed in the Korean War. (Joseph Giordono / S&S)

YONGSAN GARRISON, South Korea &#8212; Days before the annual remembrance for all servicemembers missing in action, remains believed to be those of U.S. soldiers killed in the Korean War were honored at a Yongsan Garrison repatriation ceremony Thursday.

Under clear skies, a multi-service honor guard paid tribute to a pair of metal transport coffins, draped with powder-blue U.N. Command flags. The ceremony was the fourth such at Yongsan this year, facilitated in part by an agreement to allow remains to be returned overland through the Demilitarized Zone separating the two Koreas.

Previously, remains recovered in North Korea were flown directly to Yokota Air Base in Japan, then on to an Army identification laboratory in Hawaii.

It was an appropriate coincidence for the ceremony to occur this week, LaPorte said. The third Friday of each September is designated as National POW/MIA Recognition Day. In previous years, the distinctive black flag with white POW/MIA lettering and the words &#8220;You are not forgotten&#8221; has become the only other banner &#8212; aside from the American flag &#8212; allowed to fly over the White House.

According to the Department of Defense POW/Missing Personnel Office, the caskets contained remains recovered from more than one body. &#8220;A precise number will be determined in follow-on forensic examinations,&#8221; the release read.

The remains were recovered by teams operating near the Chosin Reservoir and in Unsan County, about 60 miles north of Pyongyang. Those sites saw intense fighting in November 1950, involving U.S. units including the 7th Infantry Division, 25th Infantry Division and 1st Cavalry.

Since 1996, more than 30 joint recovery operations have taken place in North Korea, recovering more than 200 sets of remains. Of the 88,000 U.S. servicemembers listed as missing in action from all conflicts, 8,100 are from the Korean War.