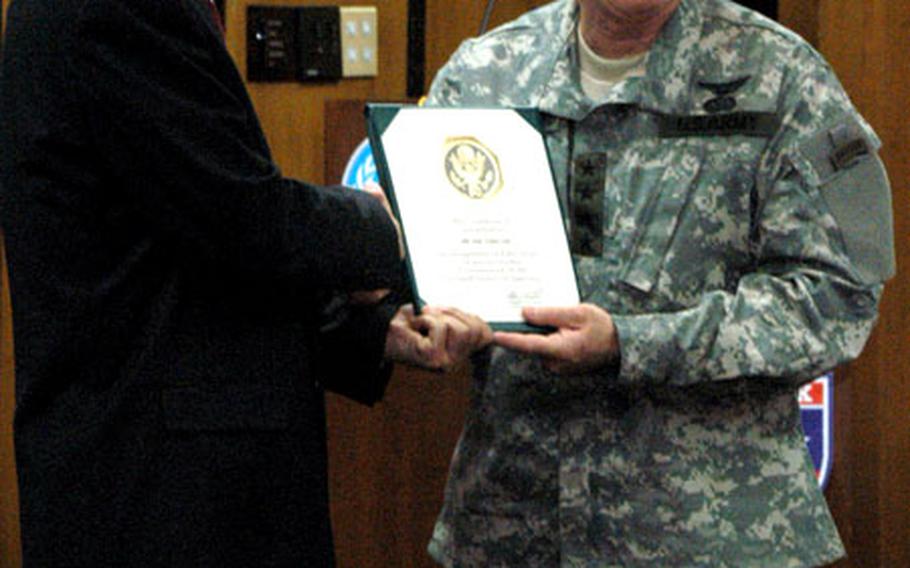 Kim Yong-tae, who works as a labor adviser in the 8th Army’s G-1 section, was honored Tuesday for working for U.S. Forces Korea for more than 50 years. USFK commander Gen. Leon J. LaPorte thanked Kim for his service and presented him with a certificate and a 50-year pin. (Teri Weaver / S&S)

YONGSAN GARRISON, South Korea &#8212; Kim Yong-tae began working for U.S. Forces Korea when he was a teen in Incheon, just a year after a truce was declared in the Korean War.

In his career with USFK, Kim has worked within the Army&#8217;s human relations departments for civilians and earned a degree from Oklahoma University. He started working for USFK in Incheon, but he moved to Seoul in the early &#8217;70s to continue his work at Yongsan Garrison.

Kim&#8217;s current job as a labor adviser involves being a liaison between USFK commanders, the Korean Ministry of Labor and the Korean workers&#8217; union at U.S. military bases. The union, called the USFK Korean Employees Union, has more than 18,000 members.

Last week, the union threatened a possible strike after U.S. and South Korean officials failed to agree to a financial arrangement to cover the costs of maintaining American troops here. The South Koreans&#8217; offer wasn&#8217;t enough to cover current costs and could prompt USFK to cut South Korean jobs and contracts at the U.S. bases, USFK officials said.

The union has asked both sides to reconsider the budget agreement.

On Tuesday, no one mentioned the difficult situation. Instead, LaPorte praised Kim for his hard work and dedication throughout the years.

After the ceremony, and a few media interviews, Kim was headed back to his desk.