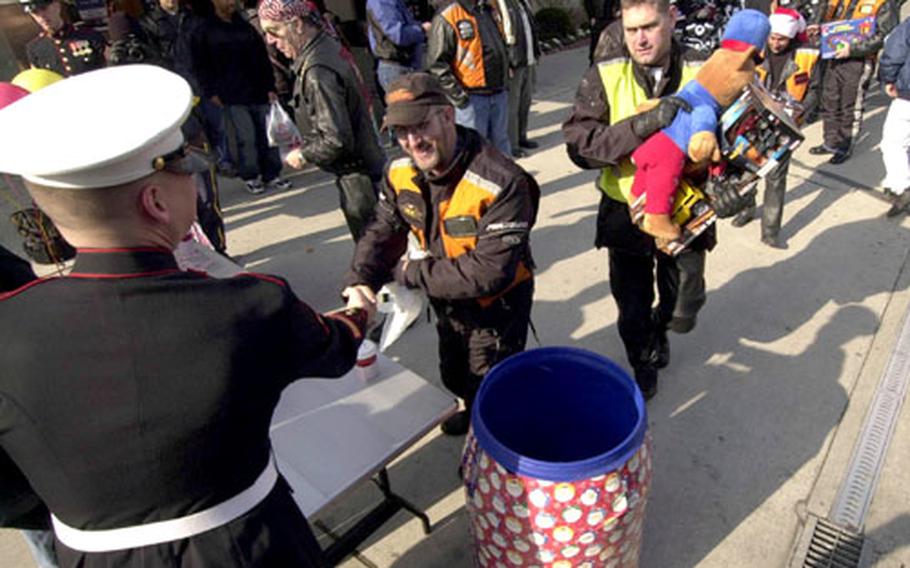 YONGSAN GARRISON, South Korea &#8212; Santa wasn&#8217;t riding a sleigh when he roared into the post exchange parking lot Saturday. Nope &#8212; he was decked out in riding leathers and perched atop a chromed-out Harley-Davidson.

Yongsan Motorcycle Club members on about 25 bikes finished a ride Saturday by donating a gaggle of gifts to the Marines, sailors and soldiers for the Marine Corps&#8217; annual Toys For Tots collection drive.

Marine Gunnery Sgt. Windell Riles, Marine Forces Korea, said he appreciated the club&#8217;s donations. He said many other people, including kindergartners at the school and the American Forces Spouses Club, also are collecting toys to donate.

The toys will go to some U.S. military-community families through the &#8220;community sharing program,&#8221; Riles said. The rest will go to off-base orphanages.

Casey Gerald of the motorcycle club said fellow club members came up with the idea for the ride that would benefit children and allow them to showcase their private organization.

He said he likes that toys will go to orphanages not currently sponsored by the U.S. military.

Riles said it was nice to have the soldiers, and sailors from Commander Naval Forces Korea, on hand to help out.

Army Sgt. Yvette Hamilton was there in her dress uniform to assist.

As the representative of the Area II Better Opportunities for Single and Unaccompanied Soldiers program, Hamilton said, she&#8217;s always is looking for ways to get soldiers involved with the community.

Riles said his Marines will be staffing collection barrels near the Four Seasons store through Dec. 18. Marines also have been collecting toys at Osan Air Base, he said.

Anyone wanting to make a donation also can visit the Marine Forces Korea headquarters near Gate 3.