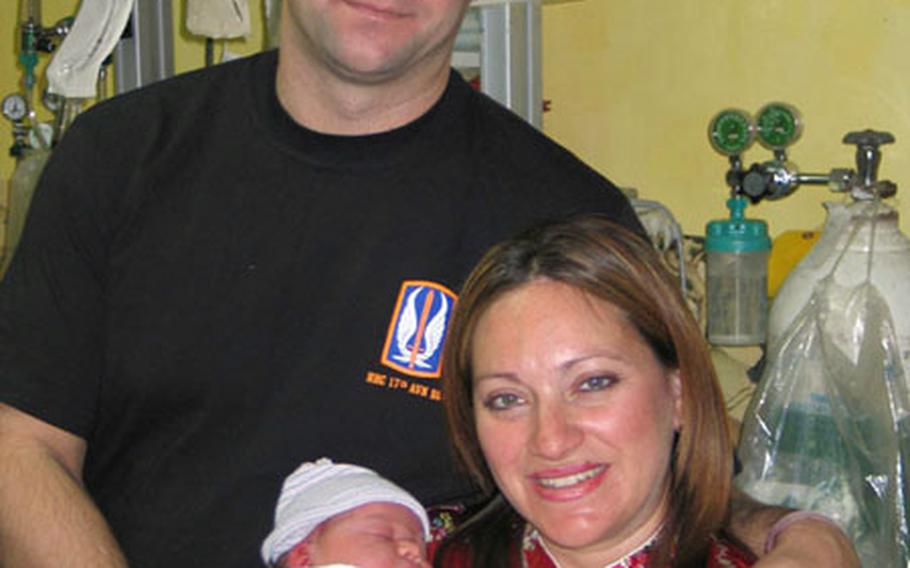 Mikito Dolberry, a boy born Jan. 1 at 1 p.m. in the U.S. Naval Hospital at Yokosuka, Japan, originally was reported as the first baby at a Pacific base. But due to a communications error between Stars and Stripes and officials at the 121st General Hospital in Yongsan Garrison, news of Juliana Mae&#8217;s 3 a.m. New Year&#8217;s Day arrival didn&#8217;t get out until Monday.

In fact, the 121st General Hospital boasts of having delivered the first two babies of 2004. Just three hours after Juliana Mae greeted both the world and the new year, a second baby was delivered at 6 a.m.

Sena J. Suarez was Baby No. 2; her parents, Kenneth and Hyo Jung, live in Uijongbu, where he works as a civilian for the Area I Support Activity.

For the Goldicks, Juliana&#8217;s arrival was later than planned but better than expected.

Her original due date was Dec. 26, said Chief Warrant Officer Jerome Goldick, stationed at Yongsan Garrison with the 17th Aviation Brigade. But nothing happened until New Year&#8217;s Eve, when Goldick and wife Judy spent most of the day at the Yongsan hospital, expecting a birth.

So hospital officials sent the Goldicks back home to Hannam Village late that afternoon. But just minutes before midnight, when the Goldicks were getting ready for bed, Judy had an announcement: &#8220;My water broke,&#8221; she told her husband.

The family jumped into their car, driving to Yongsan Garrison under a night sky full of fireworks marking the New Year. Seoul&#8217;s famously balky traffic worked in their favor this time, Goldick said. &#8220;I guess everyone was in the bars or watching the fireworks,&#8221; he joked.

By 2:30 a.m., Judy was ready to give birth. An on-call doctor was rushing to the hospital to help with the delivery and one of the emergency room docs had come up to assist. On the second big push, Goldick said, Juliana Mae was born. She weighed in at 8 lbs, 14 ounces and measured 21 and 7/8 inches long.

Juliana Mae joined brother Jacob Matthew, who was born in Fort Bragg, N.C., and sister Jade Morgen, who was born in Germany. While neither was born on New Year&#8217;s, the whole family shares the same &#8220;JMG&#8221; initials. &#8220;It makes buying monogrammed towels much cheaper,&#8221; Jerome Goldick joked.