Yomitan: Okinawa takes its past to art 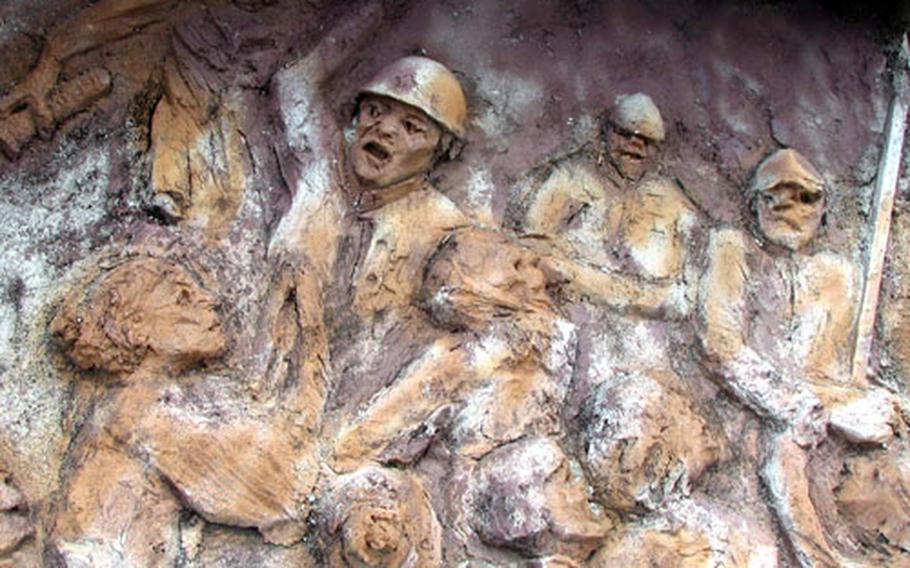 An art display at the Yomitan Village Hall depicts Japanese troops slaughtering Okinawan civilians huddled in fear in caves during the Battle of Okinawa in 1945. (David Allen / S&S)

An art display at the Yomitan Village Hall depicts Japanese troops slaughtering Okinawan civilians huddled in fear in caves during the Battle of Okinawa in 1945. (David Allen / S&S) 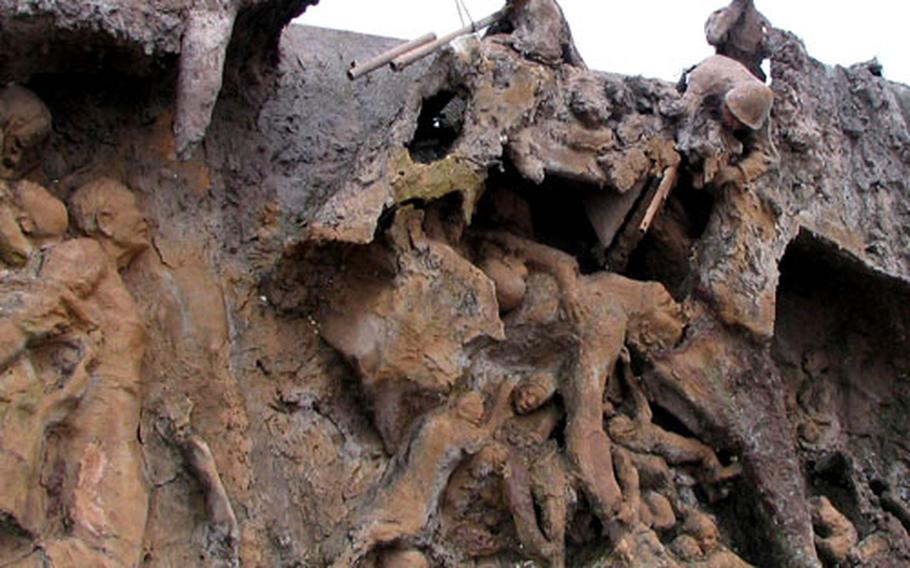 An art display depicts U.S. troops calling on civilians to come out from hiding in caves during the Battle of Okinawa. (David Allen / S&S) 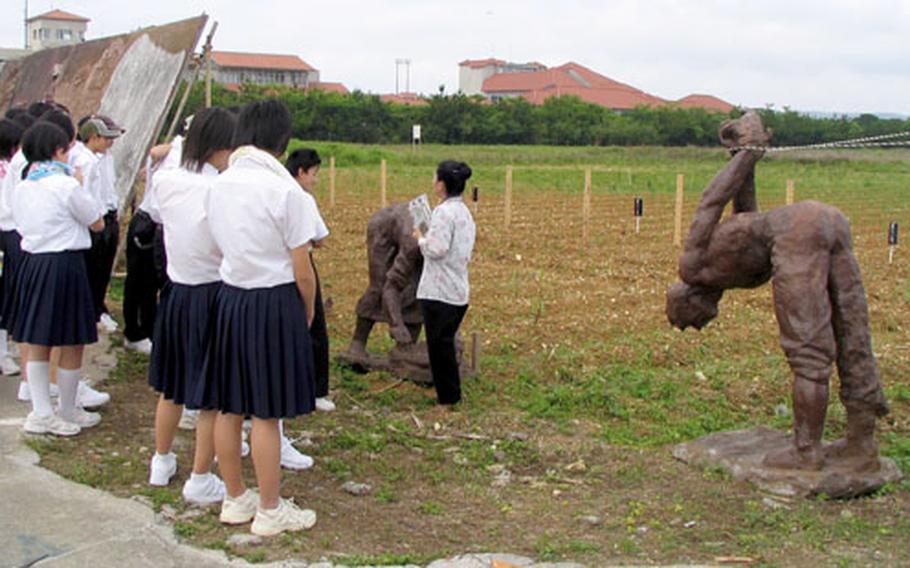 A guide talks to Okinawa high school students the meaning behind the new art exhibit. The statue at right is of a protester arrested for laying down in front of bulldozers during the forced takeover of land for U.S. bases on Okinawa in the early 1950s. (David Allen / S&S) 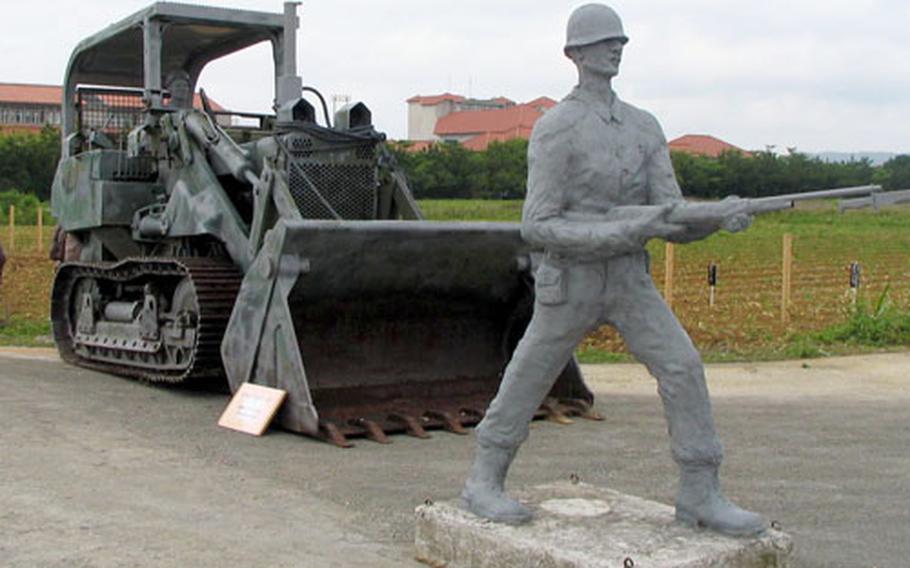 A display depicts U.S. troops using bayonets and a bulldozer to take land on Okinawa for U.S. military bases in the early 1950s. (David Allen / S&S)

With panels representing various phases of Okinawa&rsquo;s experience as a military island &mdash; from the Battle of Okinawa in 1945 and alleged atrocities by Japanese troops on the civilian population to the U.S. occupation &mdash; the display ends with statues displaying the forced takeover of Okinawa property for U.S. bases in the early 1950s and the resistance by prominent Okinawans.

The exhibit is to commemorate the return of the former Yomitan Auxiliary Airfield &mdash; once used by the U.S. Air Force and Army Special Forces for parachute exercises &mdash; to the village and local landowners.

It is on the west side of the new Yomitan Village Hall, and will be on display until June 24.

It took 10 years for Yomitan-based sculptor Minoru Kinjo to complete the display, which he calls &ldquo;War and Humanity.&rdquo;

Its main theme, according to a Japanese language brochure, is &ldquo;a picture scroll of the history of Okinawa aggrieved by the oppression of &lsquo;Yamato&rsquo; (mainland Japan) and &lsquo;the United States.&rsquo;&rdquo;

Kinjo said he hopes the exhibit on a former U.S. military base will &ldquo;breathe new life to the future of Okinawa.&rdquo;

Last December, the Yomitan airfield was returned after decades of protests.

&ldquo;The exhibition is an opportunity to express our deepest respect to the residents of Yomitan and to share their victory with the rest of Okinawa,&rdquo; Kinjo stated in the brochure.

The display begins with a statue of a pregnant woman wearing a female demon&rsquo;s mask and furiously beating a drum. Instead of the traditional prayer &mdash; &ldquo;May their souls rest in peace,&rdquo; for those who perished in the Battle of Okinawa &mdash; she says, &ldquo;The dead stand up with rage.&rdquo;

The early panels depict the hopes of some Okinawans for independence from Japan. The former Ryukyu Kingdom was annexed by Japan in 1879 and became a prefecture.

Subsequent panels display the mass suicides by civilians cowering in caves during the Battle of Okinawa &mdash; acts survivors claim were spurred on, if not ordered, by the Japanese Imperial Army.

One panel illustrates Japanese-American soldiers trying to convince civilians in a cave filled with corpses that it would be OK for them to surrender.

Other panels display life under the American occupation &mdash; covering the good care for civilians from immediately after the battle to today, when U.S. bases cover almost 20 percent of the main island of Okinawa.

At the end of the wall are statues of an American bulldozer and two soldiers armed with bayonets facing a line of Okinawans protesting the use of their land as military bases.

Since the exhibit opened last Friday there has been a steady stream of visitors, including guided tours for school groups.