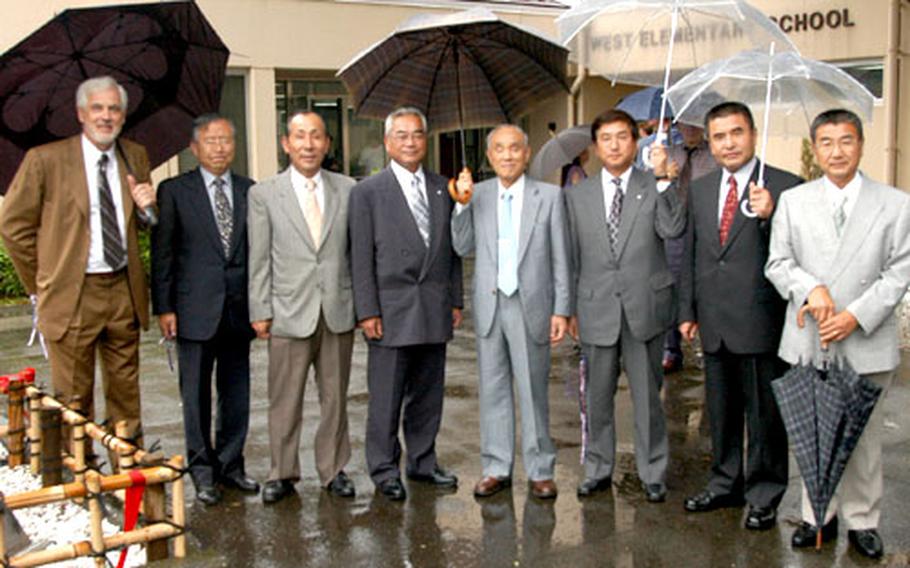 Yokota West Elementary School Principal Lee Kirsh, left, stands with members of the Tokyo Fussa Chuo Rotary Club on Wednesday by a new memorial at the school dedicated to the victims of Sept 11 attacks. (Christopher B. Stoltz / S&S)

YOKOTA AIR BASE, Japan &#8212; Yokota West Elementary School held a dedication ceremony Wednesday for two gardens, one in honor of friendship and the other to honor the victims of the Sept. 11, 2001, terrorist attacks in the United States.

Principal Lee Kirsch also honored the Japanese associations that donated labor and materials to create the twin attractions, presenting them with framed certificates of recognition and appreciation during a ribbon-cutting on school grounds.

The Yokota Event Support Association put together the Tomodachi (Friendship) Garden in Yokota West&#8217;s atrium, while the Tokyo Fussa Chuo Rotary Club volunteered time and supplies for the Memorial Garden out front &#8212; which replaces the Peace Pond dedicated on the first anniversary of the attacks.

The Peace Pond was constructed in the atrium, with running water meant to symbolize the tears shed by millions of Americans that morning in 2001, according to Cheryl Johnson, the school&#8217;s spokeswoman.

&#8220;Unfortunately, the pond leaked and created logistical problems in its indoor location,&#8221; she said.

So this spring, it was dismantled and a new garden was built outside in front of Yokota West, she added. The friendship garden then went up in the atrium, the Peace Pond&#8217;s original spot.

The Friendship Garden also has a rattan enclosure around a bamboo/rock garden with a stone lantern.