Yokota volunteers travel to help Thais dig out, build up 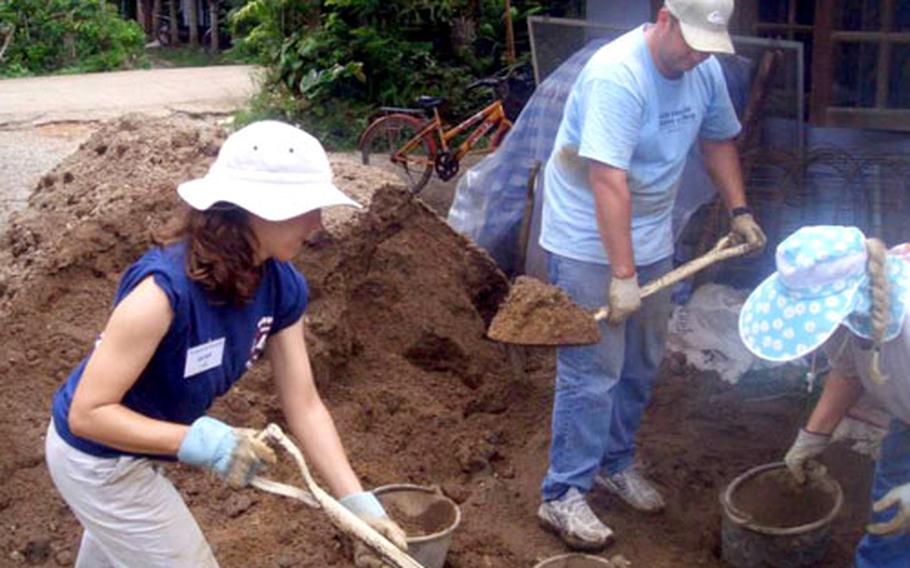 Volunteers from Yokota Air Base shovel dirt during a Habitat for Humanity project in Thailand. (Photos courtesy of Lance Posey)

Volunteers from Yokota Air Base shovel dirt during a Habitat for Humanity project in Thailand. (Photos courtesy of Lance Posey) Yokota Air Base volunteers carry concrete blocks during a Habitat for Humanity project in Thailand. (Photos courtesy of Lance Posey)

YOKOTA AIR BASE, Japan &#8212; This summer, 12 people from Yokota journeyed to Thailand, but instead of spending their time and money playing tourist, they spent the trip sweating in the summer heat, building homes for the less fortunate.

The volunteers traveled to Chiang Mai, where they built homes June 16-30 as part of a Habitat for Humanity Global Village construction project.

&#8220;It was awesome, a fantastic cultural experience,&#8221; said Bonnie Seeley, a Yokota High School social studies teacher, who participated in the project with her husband and daughter.

Posey said he has been participating in Habitat for Humanity trips since 1994 and has helped build homes in various places, including Northern Ireland, Mongolia and Uganda.

He explained that potential homeowners buy the homes from Habitat for Humanity; however, the cost of the home is kept low through monetary donations, interest-free loans and free labor provided by the volunteers. Homeowners basically end up paying only for materials, Posey said.

To qualify for a home, homeowners must also provide what Habitat calls &#8220;sweat equity,&#8221; meaning they must help build their home or other homes.

Working alongside the person or family who will be getting the new home and seeing how much they appreciate the volunteer help was the most rewarding part of the trip, Seeley said.

This is the second Habitat for Humanity trip he&#8217;s organized from Yokota, Posey said. Last summer, he and other volunteers went to Mongolia, he said.

While he does not know if he will be organizing another trip for next summer, Posey said volunteers from the past two trips, including Seeley, have expressed interest in becoming team leaders.

For more information about Habitat for Humanity Global Village, go online to www.habitat.org/gv