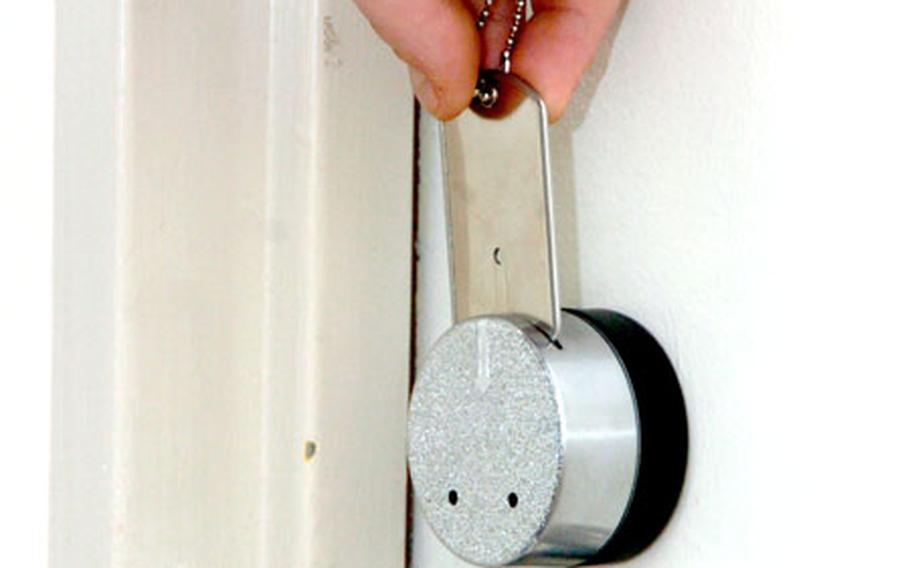 The installation of CorKey Control Systems, which require mechanical key cards, should be completed by Friday. The metal keys, called Powercards, are half the size of credit cards and contain magnetic coding sufficient to operate the locks without batteries or electrical outlets.

While many Yokota residents questioned the need for new dead bolts, housing officials defended the project, saying it will streamline the turnover process within each unit and ultimately provide significant cost savings to U.S. taxpayers.

&#8220;When a unit is required to have locks replaced, we no longer must pay for entire lock replacement, but simply reprogram existing code on the access card for the CorKey system,&#8221; said Elizabeth Wilson, housing chief for Yokota&#8217;s 374th Civil Engineer Squadron. &#8220;Reusable access cards will save the government a substantial amount of money over time.&#8221;

Prior to CorKey&#8217;s arrival, she added, each tower had its own key set. That meant 20 different master keys had to be issued to the fire department, security forces and civil engineer lock shop for emergencies such as occupant lockouts, fires or safety concerns. The new locks will allow housing officials to provide a grand master key to those agencies.

The cost to swap out the old key-lock system in Yokota&#8217;s towers ranged from $50 to $70 per unit, Wilson said, and the procedure takes up to an hour. Recoding the new access cards is a five-minute task.

The tower replacement wasn&#8217;t triggered by any security fears or spike in home invasions.

But if keys are somehow damaged, residents should follow the same emergency lockout procedures outlined in the housing pamphlet issued during housing assignment. For 24-hour emergency service, they can call 225-5790 or 225-5791.

There are no immediate plans to change the lock systems in Yokota&#8217;s garden apartments, Wilson said.