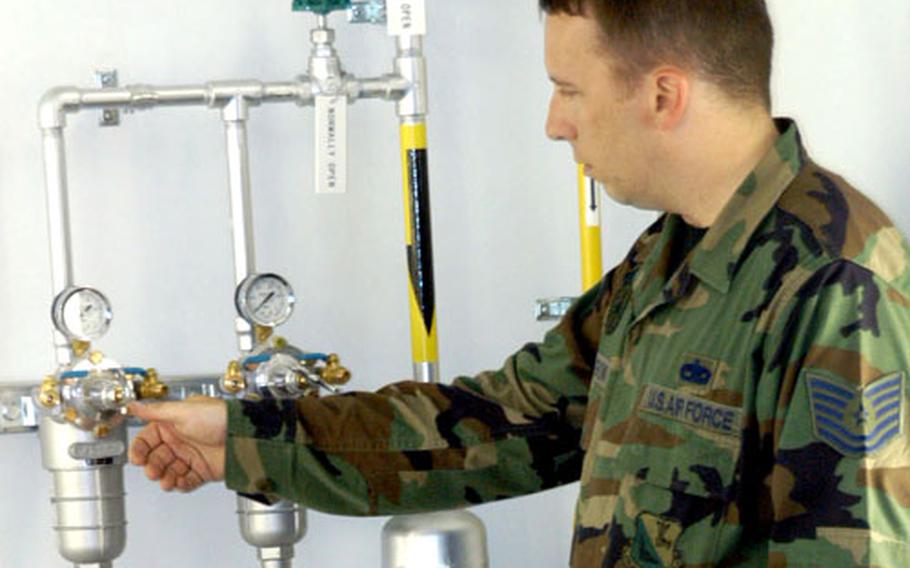 YOKOTA AIR BASE, Japan &#8212; Compared to the typical aircraft hangar, these are palaces, Yokota maintainers say.

This week, the base plans to unveil two new multimillion-dollar C-130 hangars on opposite sides of the flight line, to supplant 1950s-era buildings. Separate grand-opening ceremonies will be held at 11 a.m. Tuesday and at 9 a.m. Thursday.

The first hangar, on Yokota&#8217;s east side near the movie theater and dental squadron, is devoted to fuel systems repair. The other, on the main part of the base, is for structural maintenance, survival equipment and refurbishment.

The Japanese government began building both in fall 2004. They have dramatically improved ventilation, upgrades in safety and environmental processes and expanded offices.

Officials from the 374th Maintenance Squadron said Friday that consolidating functions should ease workloads and speed getting aircraft back flying.

&#8220;It&#8217;s like entering the 21st century,&#8221; said Staff Sgt. Andre Thomas, an aircraft fuel systems craftsman. &#8220;We&#8217;re moving from the actual tail hanging outside the hangar to full enclosure, with revolutionary ventilation and all the updated safety measures. We have the ability to do everything we need to do in our career field. It&#8217;s going to help tremendously.&#8221;

The $11.5 million fuel systems facility, which works on C-130s from Yokota and Kadena Air Base, Okinawa, actually began operating in June because of the active rainy season, Thomas said. Repairing fuel tanks, swapping out components and fixing leaks are among the section&#8217;s duties.

Potential hazards are far less, he said. A state-of-the-art fire extinguishing system can blanket a C-130 within 90 seconds.

Fuel bladder cells now are tested in a sterile room. Thomas said dust and particles used to trigger numerous false indications; such tests used to take 24 hours; now, they can be completed in 12.

Other jobs include aircrew and cargo bay upkeep, seat replacement and stripping paint from wheels and brakes.

There are separate paint and blasting booths and a shower transition area for decontamination. The hangar has a hazardous-materials storage area and fabrication shop for survival gear.

The old hangar had to be cleaned constantly and some C-130 parts farmed out to different places on base, he said. &#8220;This speeds up the process &#8230; keeps everyone all in one facility. It&#8217;ll significantly reduce the workload of the aircraft structural maintenance shop.&#8221;

The two 1950s-era hangars, which sit next to each respective new structure, will remain standing as emergency backups and extra space if needed.