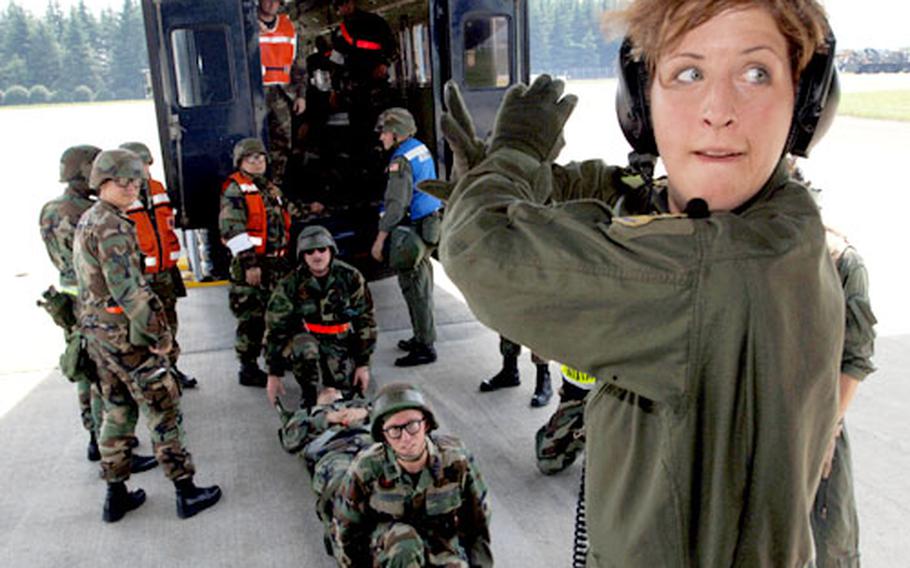 Capt. Jennifer Ralicki, a flight nurse from the 18th Aeromedical Evacuation Squadron, Kadena Air Base, waits for the green light before evacuating "injured" airmen during an Operational Readiness Exercise at Yokota Air Base. (Val Gempis / Courtesy of U.S. Air Force)

Capt. Jennifer Ralicki, a flight nurse from the 18th Aeromedical Evacuation Squadron, Kadena Air Base, waits for the green light before evacuating "injured" airmen during an Operational Readiness Exercise at Yokota Air Base. (Val Gempis / Courtesy of U.S. Air Force) 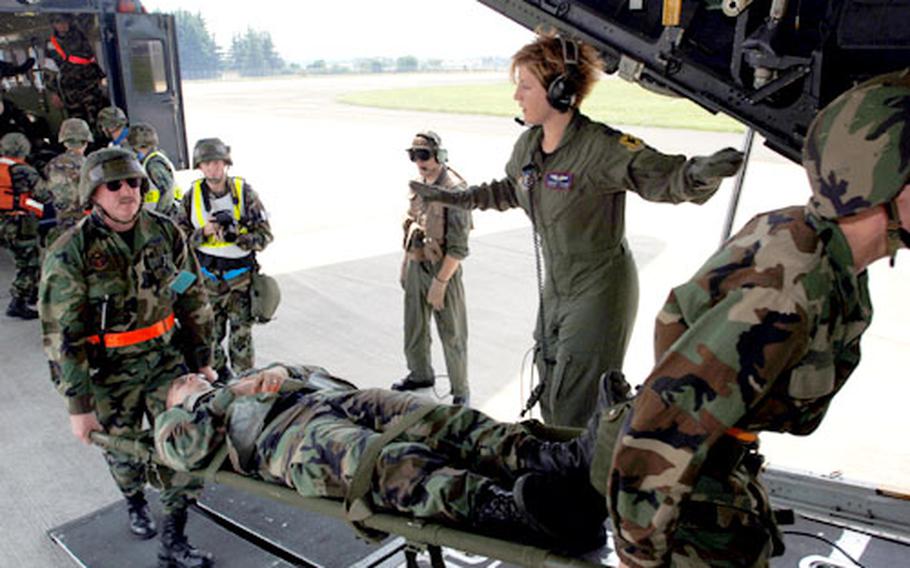 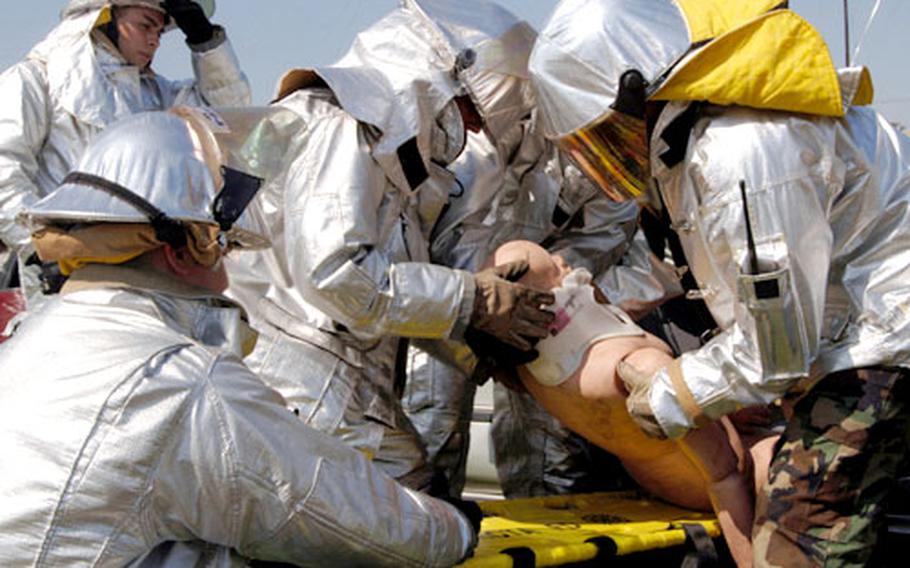 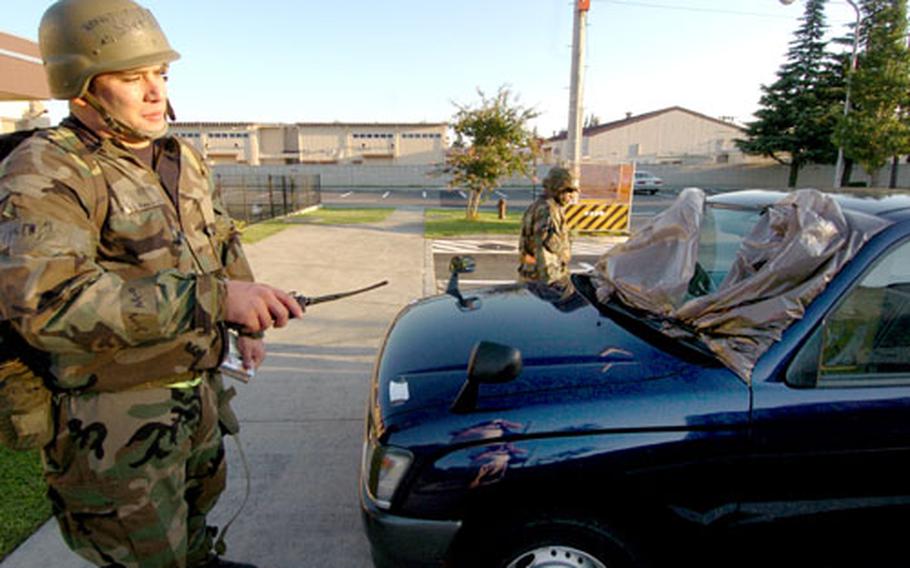 During a training exercise at Yokota Air Base, Staff Sgt. Esequiel King and Staff Sgt. Melvin Holmes search a truck to see if it has been contaminated. (Christopher B. Stoltz / S&S) 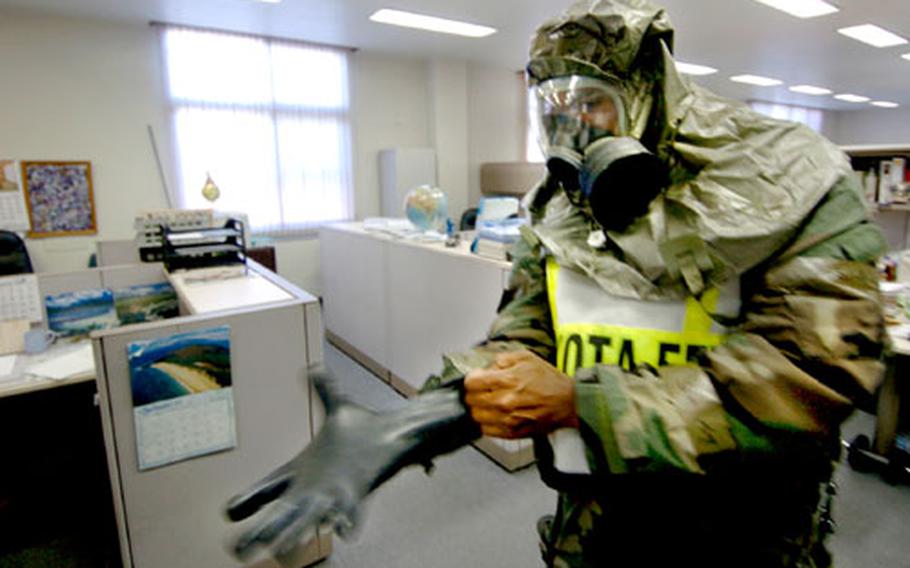 YOKOTA AIR BASE, Japan &#8212; The 374th Airlift Wing is nearing the end of a grueling, high-tempo Operational Readiness Exercise, a weeklong examination of the base&#8217;s deployment capabilities and chemical-warfare readiness.

More than 3,000 airmen &#8212; decked out in full mission-oriented protective posture gear, or MOPP &#8212; practiced moving personnel and cargo while testing their ability to survive and operate under a constant threat of attack.

&#8220;This one has been more active, definitely more strenuous on the participants, than other exercises because we&#8217;re going to run all the way through. A typhoon ended our last one early,&#8221; said Capt. Warren Comer, a 374th Airlift Wing spokesman. &#8220;The wing is getting a good taste of what next year&#8217;s Operational Readiness Inspection will look like, since this exercise is going full circle.&#8221;

Troops were called in to work at about 6 a.m. Sunday for the year&#8217;s third ORE, with forces ramping up for a mass deployment. A noncombatant evacuation operation unfolded Monday and various chemical &#8220;attacks&#8221; were staged on base facilities throughout the week.

The exercise is expected to close Friday.

Heightened &#8220;tensions&#8221; on the Korean Peninsula served as the drill&#8217;s simulated setting, Comer said. Prior to full-blown &#8220;hostilities,&#8221; Yokota officials airlifted forces, supplies and equipment while clearing the base of families, civilians and dependents.

Late Wednesday, the 374th Civil Engineer Squadron was hit by a chemical strike as part of the simulation, with airmen ducking under desks and lying low in hallways while awaiting further instructions.

That scene played out in buildings across the base all week, Comer said, and was a key element of the overall readiness assessment.

&#8220;It tests the base&#8217;s ability to survive a chemical attack and be able to operate at the same level it was,&#8221; he added. &#8220;The most important thing is how everybody does during the portions they&#8217;re being tested on. Everyone has their own little segment in this exercise and each group or unit is tested.&#8221;

The base&#8217;s inspector general pumps out all exercise scenarios. Each Yokota unit carries an Exercise Evaluation Team member who provides input used in a final report.