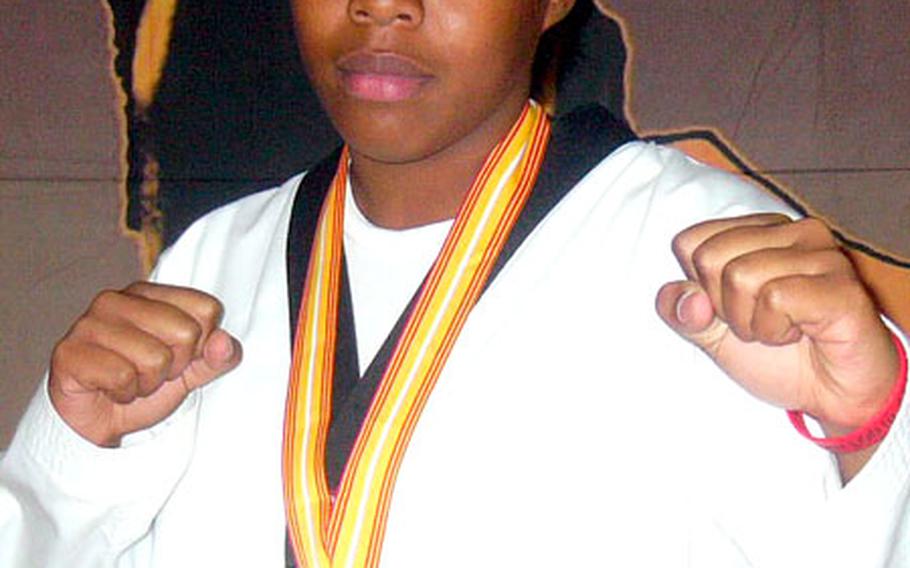 YOKOTA AIR BASE, Japan &#8212; At her first-ever tae kwon do tournament, 13-year-old Desiree Brown squared off against opponents with more experience and a higher belt ranking than she has.

But that didn&#8217;t stop her from placing first in her weight class.

Brown trained for the 2006 South Kanto District Tae Kwon Do Championship, held in Yokohama on Dec. 23, under Dwayne Johnson and Thomas Sims, both technical sergeants who teach youth tae kwon do classes at Yokota Air Base.

Competing in a bracketed tournament at the Hodogaya Sports Center along with three of her Yokota classmates, Brown, a green belt who has been practicing tae kwon do for about a year, defeated two higher-ranking opponents, a black belt and a red belt, to emerge the winner of her six-person weight class.

Tae kwon do is a Korean martial art that loosely translates to &#8220;the way of hand and foot fighting,&#8221; Johnson said. In recent years it has grown in popularity, due in part to its introduction into the Summer Olympic Games, first as a demonstration sport in 1988 and then as a medal event in 1992.

During competitions, participants in protective pads try to punch or kick their opponents, scoring points based on hits, similar to boxing.

Brown said she enjoys the sport and plans to continue training and competing in tournaments.

Although most of the participants in last month&#8217;s competition were Japanese, Brown&#8217;s first opponent was a friend from Camp Zama.

For more information about youth tae kwon do at Yokota, contact the east Youth Center at DSN 225-7441.