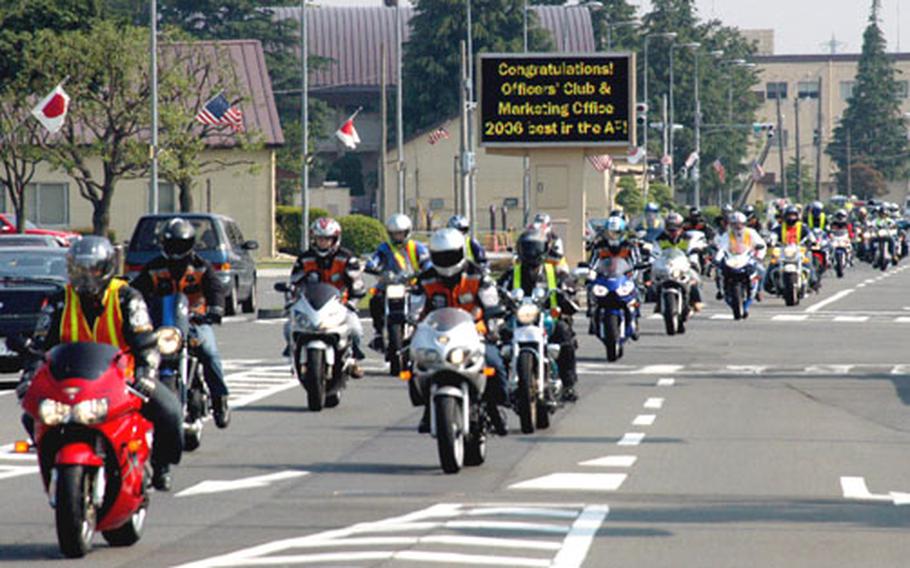 Airmen and other motorcycle owners form a long line down Airlift Avenue at Yokota Air Base, Japan, on Thursday during a safety awareness ride. It was part of the 374th Airlift Wing’s sports and safety day. (Vince Little / S&S)

YOKOTA AIR BASE, Japan &#8212; Yokota&#8217;s Sports and Safety Day started with aerobics after sunrise and ended with a tug-of-war.

In between, 374th Airlift Wing squadrons tangled in 3-on-3 basketball, tennis, golf, softball, beach volleyball and a swim relay. They even locked up on the foosball table.

&#8220;The majority of our fatalities and mishaps occur during the summertime,&#8221; said Master Sgt. Garius Neal, ground safety chief for the wing safety office. &#8220;This campaign lets people know about the increased high-risk activities during that critical time period. People should take a step back and manage the risk involved in those activities.&#8221;

Thursday&#8217;s basewide event featured several displays and booths, with themes ranging from fire to flight safety. Airmen and family members could put on &#8220;fatal-vision goggles&#8221; &#8212; glasses crafted by the wing safety office to replicate intoxication &#8212; then try to toss around a beach ball.

The Fussa City Fire Station brought an earthquake simulator, while the Tokyo Metropolitan Government had a seat belt device that showcased &#8220;impacts&#8221; at different speeds.

On Thursday afternoon, Col. Paul Montgomery, the 374th Airlift Wing&#8217;s vice commander, led about 50 motorcycle enthusiasts on a big loop around the base to promote safety awareness &#8212; for both riders and the general population.

Dacosta operates an unofficial online forum for riders at www.yokotamc.org.

Throughout the &#8220;101 Critical Days of Summer&#8221; campaign, Yokota squadrons will compete for points in the Commander&#8217;s Safety Cup Challenge. Winners among large, medium and small units will receive trophies at summer&#8217;s end.

Neal said most accidents are preventable.

&#8220;That&#8217;s what we want people to understand,&#8221; he said. &#8220;People might be speeding or not wearing protective equipment or alcohol is involved. Very seldom do you see something where everyone did the right thing.

&#8220;We want people to be aware of their surroundings and personal limits. ... The main thing is to plan ahead and identify certain risks, know your environment. Take precautions but still have fun.&#8221;