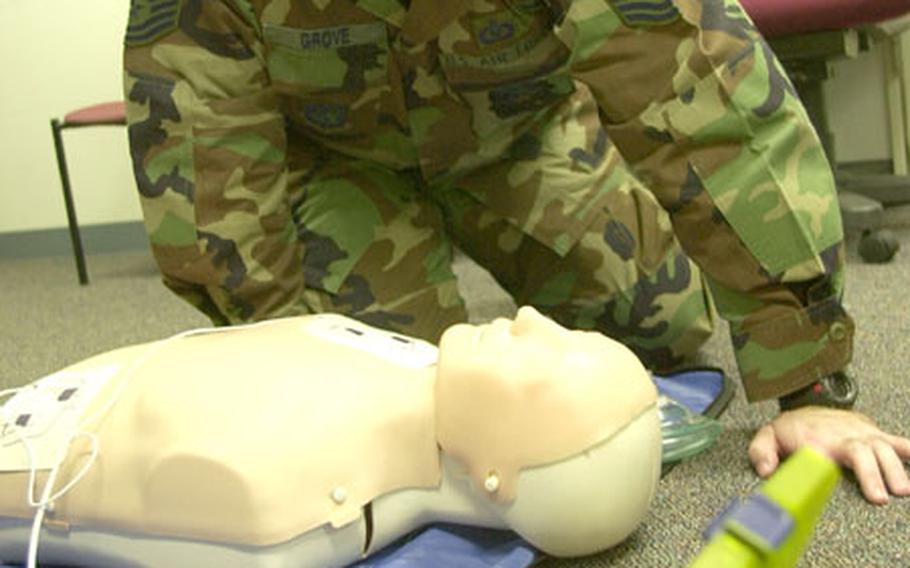 YOKOTA AIR BASE, Japan &#8212; Airmen or contractors who go into sudden cardiac arrest at the 459th Airlift Squadron will have a better chance of surviving thanks to a new piece of equipment.

It&#8217;s one of Yokota&#8217;s first nonemergency response units to purchase defibrillators, according to officials. Yokota&#8217;s fire department has three &#8212; one at each station &#8212; said Master Sgt. Russell Eidenschink, assistant chief of B-shift operations.

Having the defibrillators markedly slashes the time needed to respond to cardiac arrest, &#8220;especially on the west side, when we have ambulances on the east side,&#8221; Eidenschink said. &#8220;That&#8217;s a good five minutes at least. It can definitely make the difference between life and death.&#8221;

Squadron members say they want to be equally prepared for the unexpected.

The $3,000 defibrillators will be posted next to medical kits at each work center, one on every floor, Blouin said. Eventually, the squadron&#8217;s 40 military members and 20 civilians will be trained in how to use them.

Two life-support technicians were the first to be trained on Tuesday, when representatives from Cardiac Science Inc., the machine&#8217;s manufacturer, presented a three-hour class on cardio-pulmonary resuscitation, or CPR, and proper defibrillator use.

Defibrillators are used on patients in sudden cardiac arrest, when their is heart is quivering instead of beating, failing to circulate blood through the body and oxygen to the brain. Equipped with padded electrodes, the defibrillator analyzes heart rhythm and, with a series of shocks, often can reset the heart&#8217;s normal electrical impulses, said Hernan Ricaurte, Cardiac Science Asia sales director and American Heart Association consultant.

It&#8217;s used in conjunction with CPR to restore a pulse and blood flow while waiting for advanced life support help to arrive. A person can survive at most 10 minutes with no heart rate, Ricaurte said, and brain death can occur within eight minutes. A defibrillator takes 10-15 seconds to analyze heart rhythm, after which an automated voice advises whether to administer shock.

The kit comes with gauze to wipe sweat from a patient&#8217;s chest, where two electrodes are attached, and a razor to shave excessive chest hair. A set of scissors could be used to cut open a shirt.

Tech. Sgt. Mike Grove, a life-support technician with the 459th Airlift Squadron, was impressed with the machine&#8217;s rapid response, as demonstrated during training scenarios.