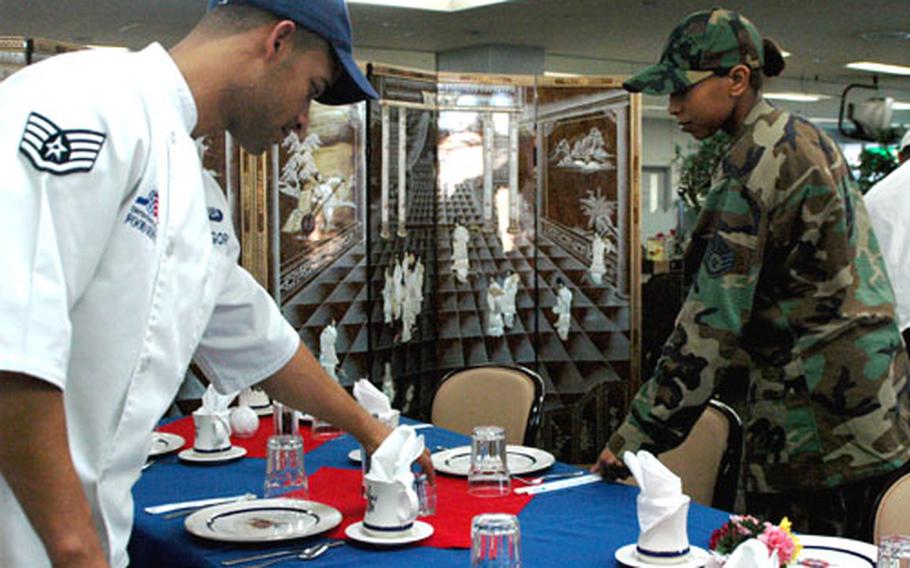 Staff Sgts. Tyrone Gregory, left, and Angola Wellington set the table in the VIP section of the Samurai Cafe. The Cafe was recently recognized as the best in PACAF. (Bryce S. Dubee / S&S)

Staff Sgts. Tyrone Gregory, left, and Angola Wellington set the table in the VIP section of the Samurai Cafe. The Cafe was recently recognized as the best in PACAF. (Bryce S. Dubee / S&S) Tomohiro Ishibashi adds garnish to food while setting up for dinner at the Samurai Cafe. (Bryce S. Dubee / S&S)

Thanks to the U.S. Air Force Worldwide Menu, the exact same meal is served at every base dining facility around the world. But that doesn&#8217;t mean all dining facilities are the same.

Last week, for the second year in a row, Yokota&#8217;s Samurai Caf&#233; was recognized as the best Single Category dining facility in Pacific Air Forces, winning the Food Service Excellence competition. The category is for installations with only one dining facility.

&#8220;To be recognized as the best in the Single Category two years in a row is a tremendous accomplishment,&#8221; said Senior Master Sgt. Claude Bryant, food services superintendent.

Whenever he travels, Bryant said, he always checks out the dining facilities and restaurants in the area to get new ideas.

&#8220;We should be parallel with restaurants in the way that we provide service to our customers,&#8221; he said.

Wireless Internet access in the dining area, a television commercial that gives the menu hot line and touts the cafe&#8217;s features and monthly themes such as Texas barbecue night and Asian cuisine night are part of what make the Samurai Caf&#233; stand out from the competition, said food services officer Mark S. d&#8217;Entremont.

&#8220;We are the only base that I know of in the Air Force that has their own chopsticks,&#8221; he said, holding up a pair. On the paper wrapping were printed the facility&#8217;s hours, Web site address and phone number for a recorded menu.

In February, the cafe will go to the next level of competition: the Hennessy Trophy, which recognizes the best dining facility in the Air Force.