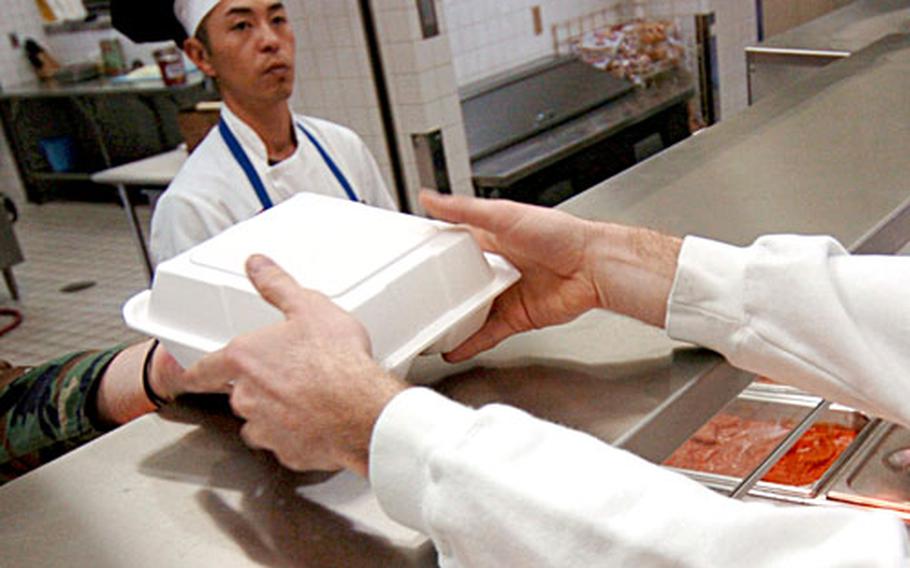 An airman picks up lunch recently in the Samurai Cafe at Yokota Air Base, Japan. The dining facility was named best in Pacific Air Forces last fall and is now in the running for the 2006 Hennessy Award, the service’s top honor. (Christopher B. Stoltz / S&S)

A four-member inspection team arrives this week to review the base chow hall in its bid for the Hennessy Award. That process is slated to begin Monday.

&#8220;We are very excited to represent (Pacific Air Forces) in the competition for the 2006 Hennessy trophy, and using this as a stepping stone in improving service for the wing personnel,&#8221; said Master Sgt. Robert Boettner, the Samurai Cafe Dining Facility manager.

Bases with more than one dining facility fall into a separate classification. Finalists are being scrutinized through March 6, and winners will be announced at a major food show in Chicago this May.

It marked the first triumph in 11 years for Yokota&#8217;s dining facility, according to Boettner.

Judges evaluated all aspects of food service and praised the chow hall&#8217;s cleanliness, marketing support and staff knowledge. Along with a trophy, the Samurai Cafe received $25,000 from PACAF for facility upgrades and the purchase of equipment.

Airman 1st Class Kimkeisha Ivey of the 374th Maintenance Operations Squadron said she enjoys the wide selection offered by the base dining facility.