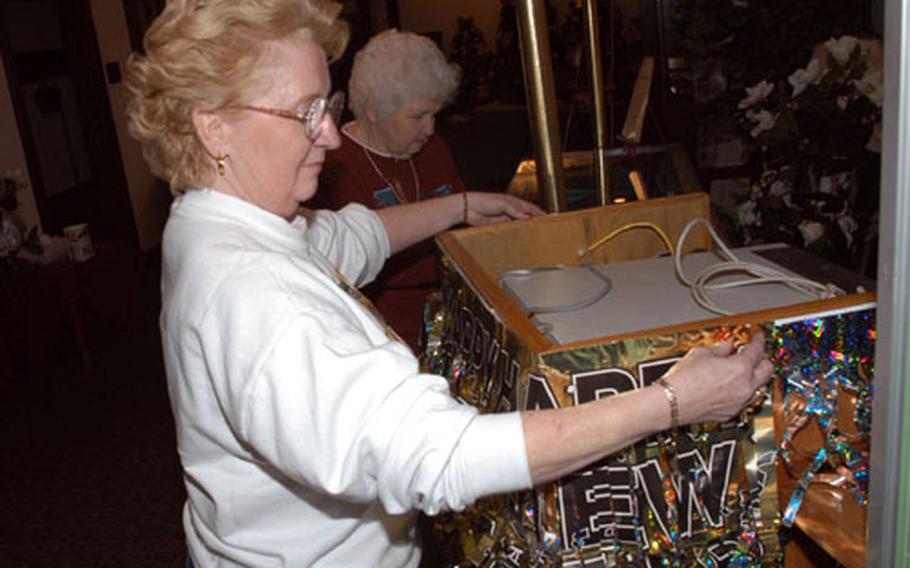 Yokota Air Base Officers&#39; Club General Manager Linda Danner decorated the club&#39;s foyer Tuesday with her mother, Kathleen Powell, for the New Year&#39;s Eve party. The club was named best in the Air Force for fiscal 2001-02 and plans to expand its programs in 2003. ()

YOKOTA AIR BASE, Japan &#8212; For the officers club at this base west of Tokyo, improving on the past year will be a hard feat.

The club was named best in the Air Force for fiscal 2001-02, a first for Yokota, according to club general manager Linda Danner.

About 10 hours before doors opened for one of the biggest parties of the year, the club was unusually empty.

Danner gave her staff the day off and decorated the club with the help of her mother and a few friends.

Her management style appears to be working.

Membership at the club stands at 897, which represents 96 percent of potential clientele. Customer satisfaction, based on Interactive Customer Evaluation surveys, is also 96 percent, Danner said. The club hosts more than 50 programs a month, from karaoke to meals with a theme.

The new year bring big plans for Danner, too. She intends to bring back &#8220;Aficionado Night,&#8221; an evening of cigars and wine sampling, this year on a grander scale.

Maj. Richard Pakola, a lawyer with the 374th Airlift Wing legal office, said the club seems to offer a lot more programs than those he&#8217;s belonged to in the States.

But Danner is most excited about the opening of a new Mexican restaurant on Yokota&#8217;s East side.

Pancho Villa, scheduled to open in February or March, will be a concession of the officers club, Danner said. The club upkeeps the building in exchange for a percentage of sales. Owner Dave Scott also runs a Pancho Villa between Camp Zama and the Sagamihara housing area. That location will stay open.

Enlisted ranks may dine at the O&#8217;Club for lunch, Sunday brunch and when the Enlisted Club&#8217;s Charlie T&#8217;s restaurant is closed for special occasions. But otherwise, the biggest competition comes from off base, Danner said.