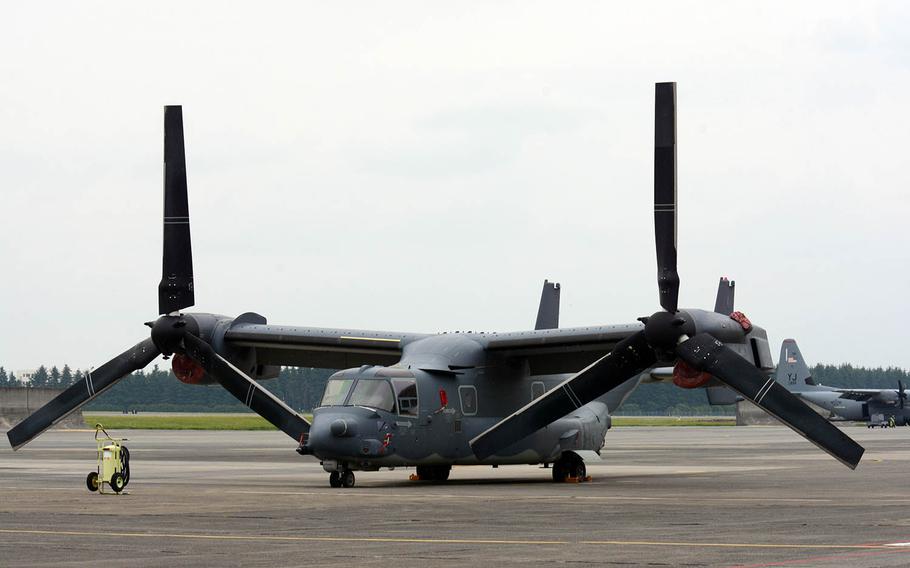 YOKOTA AIR BASE, Japan — Five U.S. CV-22 Osprey tiltrotor aircraft are back in Tokyo for a short break before resuming training elsewhere in the region, the Air Force said.

The Ospreys, part of a Special Operations squadron of 10 aircraft, first arrived at Yokota in early April but departed soon after for training that officials said would last several months.

“The CV-22s will spend a short time at Yokota before departing for further training around the region,” Air Force spokeswoman Kaori Matsukasa said in an email Wednesday. “When they return from training, they will continue to operate from Yokota.”

The aircraft — which can take off like helicopters, then tilt their rotors to fly long distances as fixed-wing planes — have attracted intense interest in Japan.

Activists have focused on accidents, including an emergency landing by a Marine Corps MV-22B Osprey in waters off Okinawa in 2016. The service operates 24 MV-22Bs out of Marine Corps Air Station Futenma on the southern island prefecture.

The Ospreys’ arrival at Yokota “addresses regional security concerns in line with the recently released 2018 National Defense Strategy and also provides a platform that can rapidly react to natural disasters or crises,” the Air Force said last month.

The Osprey squadron will initially bring only about 100 people to Yokota, but that number will grow to 450 as additional aircraft arrive, base officials have said.