Yokota's Air Force band gets reinforcements for show at Budokan 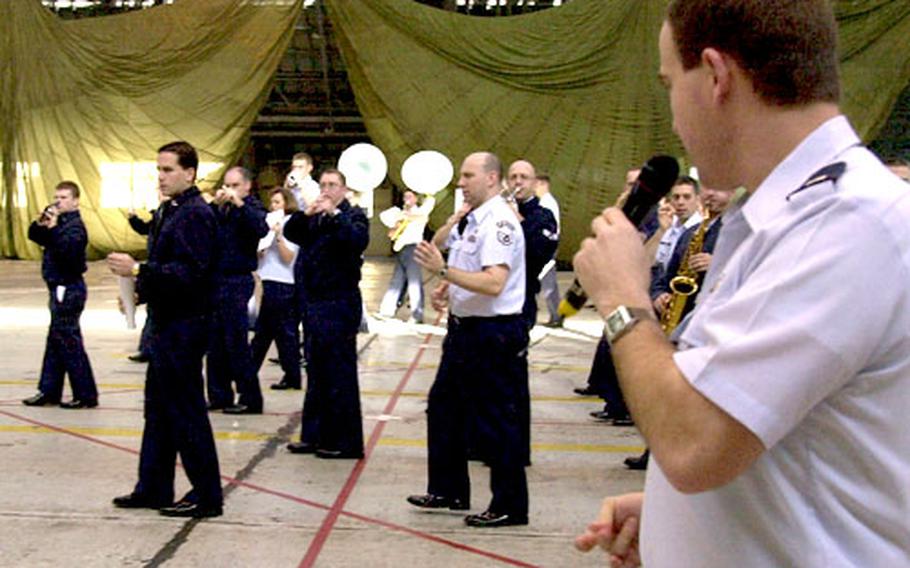 Capt. Jeffrey Warner, commander of the U.S. Air Force Band of the Pacific-Elmendorf, leads band members through drill steps during a rehearsal at Yokota Air Base, Japan, on Monday. (Jennifer Svan / S&S)

Capt. Jeffrey Warner, commander of the U.S. Air Force Band of the Pacific-Elmendorf, leads band members through drill steps during a rehearsal at Yokota Air Base, Japan, on Monday. (Jennifer Svan / S&S) Capt. Daniel Price, commander of the U.S. Air Force Band of the Pacific-Asia at Yokota Air Base, conducts band members through a George Gershwin tune at Yokota on Monday. The 55-member ensemble, augmented with Air Force band players from around the world, has eight days to rehearse for its performance this weekend in Tokyo&#39;s Budokan Culture Hall. (Jennifer Svan / S&S) 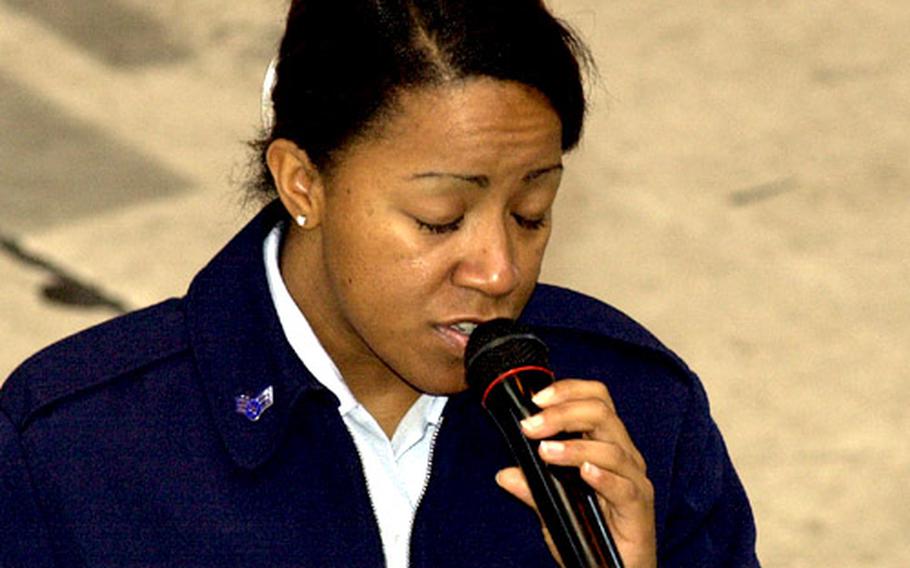 YOKOTA AIR BASE, Japan &#8212; They have eight days to master five pieces of music and countless marching steps.

The Japanese Defense Music Festival, Saturday and Sunday at Tokyo&#8217;s Budokan Culture Hall, is expected to draw about 45,000 people. The 7,500 tickets for the six two-hour shows are sold out; they usually are sold well in advance, organizers said.

Yokota&#8217;s U.S. Air Force Band of the Pacific-Asia is invited to perform in the annual concert every three years. Due to its smaller size &#8212; it has about 30 members, compared to a stateside Air Force average of 60 per band &#8212; it asks for augmentees, or volunteers to swell its ranks. This year, 35 band members representing seven bands from around the world answered the call. They&#8217;ll play at the Budokan with 22 members from the USAF Band of the Pacific-Asia&#8217;s ceremonial band.

While the other bands have rehearsed for three months, the Air Force band members have just eight days to nail their performance, Price said. The augmentees arrived in Japan late last week and began rehearsing right away. Participants were required to memorize the music ahead of time and review slides of drill steps. The band will play and march to four abbreviated pieces &#8212; the band plays for about six minutes in each show &#8212; taken from George Gershwin&#8217;s American opera &#8220;Porgy and Bess&#8221;: &#8220;Summertime,&#8221; &#8220;It Ain&#8217;t Necessarily So,&#8221; &#8220;I Loves You Porgy&#8221; and &#8220;I&#8217;m On My Way.&#8221; The final piece is a jazzed-up version of the Air Force theme song, said Master Sgt. Pete Harrison, Yokota band piano player and noncommissioned officer in charge of public affairs.

Much of the rehearsing this week at Yokota and the Japan Ground Self-Defense Force&#8217;s Camp Asaka is devoted to practicing the intricate drill steps.

&#8220;One of the major reasons we&#8217;re doing this is as an expression of friendship and cooperation,&#8221; Price said. &#8220;The invitation to play comes from the highest levels of the Japanese defense administration.&#8221;