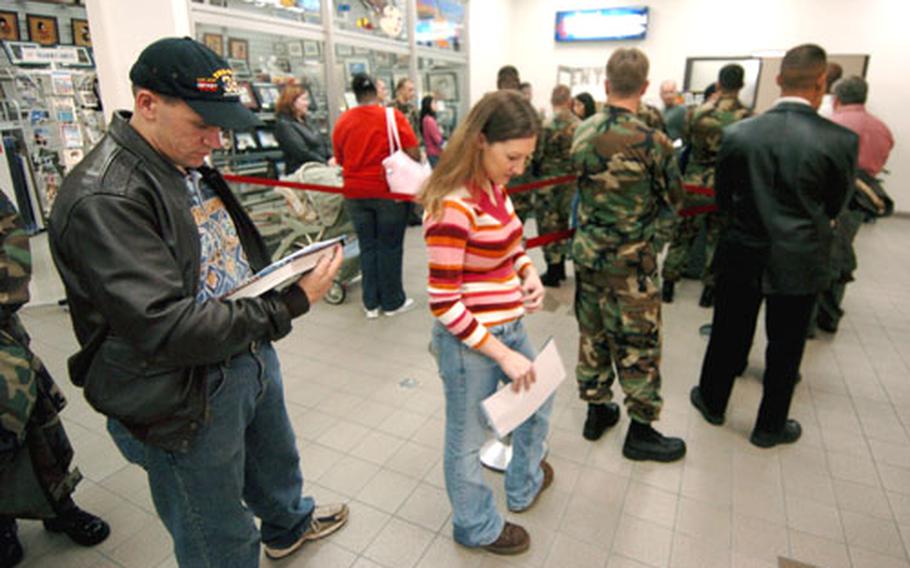 Community members wait in a long line Tuesday outside SoftBank Telecom, formerly Japan Telecom, to register for Internet services at Yokota Air Base, Japan. Base residents scrambled to switch providers ahead of Americable’s departure at midnight Wednesday. (Christopher B. Stoltz / S&S)

YOKOTA AIR BASE, Japan &#8212; With Americable flipping its switch off this week, residents scrambled to hook up with the base&#8217;s lone remaining Internet provider, forming long lines at SoftBank Telecom &#8212; formerly Japan Telecom &#8212; in the Yokota Community Center.

At midnight Wednesday, Americable was slated to cease paid cable television and broadband Internet services at Yokota after its 10-year franchise agreement with the base officially ended.

SoftBank Telecom was waiving the $50 connection fee if customers changed their service by the close of business Wednesday; midnight Wednesday was the deadline to pick up the $50 gift certificates the company offered to those who came over after Aug. 1 but paid the connection fee.

Allied Telesis Capital Corp., the installation&#8217;s new provider of integrated voice, video and data services, plans to have Internet and telephones running in early January and a cable television package by May, company representatives announced two weeks ago.

To get Internet access, many already had switched to SoftBank Telecom, an Army and Air Force Exchange Service merchant.

&#8220;We estimated there were 600 people that needed to come over from Americable,&#8221; said Brett McCormick, services business manager for AAFES at Yokota and camps Zama and Fuji.

As many were expected on Tuesday, he said &#8212; and about 20 people already were waiting 15 minutes before the SoftBank Telecom office opened at 10 a.m.

Staff Sgt. Michael Flossic of the 730th Air Mobility Squadron found himself at the end of the line Tuesday afternoon.

Tech. Sgt. James Connor of the 374th Logistics Readiness Squadron said he&#8217;d been in the line for an hour and 15 minutes Tuesday.

Airman Wesley Smith, of the 374th Security Forces Squadron, said he just arrived at Yokota last Friday and was unaware of the base&#8217;s cable TV and Internet situation.