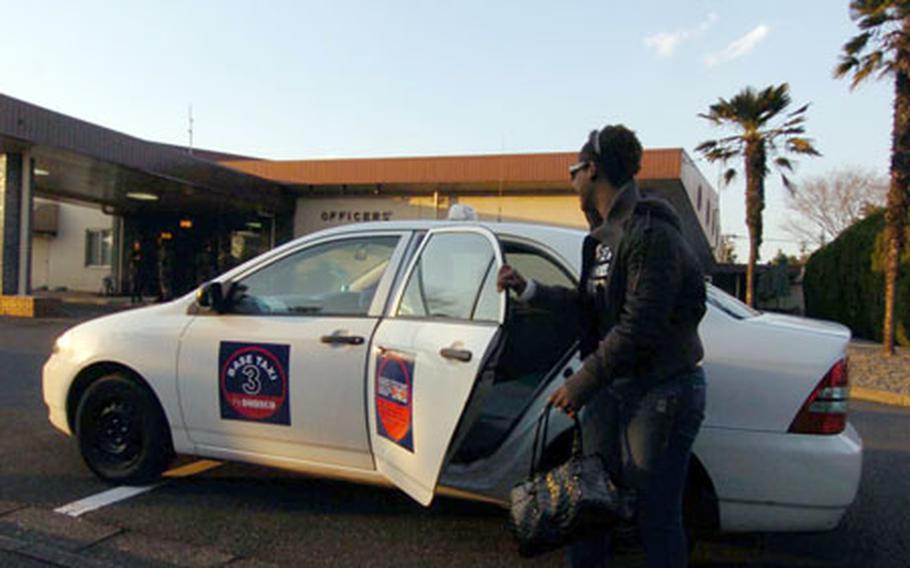 Tyvette Brittingham takes the new taxi cab service on base at Yokota Air Base, Japan on Feb. 1, 2007. (Christopher B. Stoltz / S&S)

YOKOTA AIR BASE, Japan &#8212; Residents seem pleased that on-base taxis again are roaming the streets of Yokota after nearly a decade-long absence.

Still, many people who have taken the cabs since they began operating Feb. 1 say fares are a little expensive. Others hope the service can be expanded to destinations outside the gates, particularly the nearby Fussa train station.

Cab stands are set up in areas where high demand is expected. Customers also can call 227-TAXI(8294) to be picked up curbside.

Ken Howard, a dispatcher for Base Taxi by DODSCO, the company offering the new service, said response has been positive so far and there haven&#8217;t been any major problems since last week&#8217;s rollout.

More cabs could be added if the business blossoms and customer demand grows, he added. DODSCO has a one-year contract with an option for four if the service succeeds.

Army Staff Sgt. Jeremy Emrick, at Yokota on a temporary-duty assignment from Fort Shafter, Hawaii, to take part in the Keen Edge and Yama Sakura exercises, rode from the Kanto Lodge to U.S. Forces Japan headquarters on Tuesday afternoon.

Tyvette Brittingham, a 17-year-old senior at Yokota High School, said she spent $13.30 on a trip from Temporary Lodging Facility to the Yokota Officers&#8217; Club after missing the Kanto Express, the base&#8217;s free base shuttle.

Airman Samantha Shipley of the 374th Maintenance Squadron had a doctor&#8217;s appointment Tuesday but said she planned to wait on the bus.

Maj. Daniel Price, commander of the U.S. Air Force Band of the Pacific-Asia, said he&#8217;s also hoping for that.

&#8220;Some people choose not to have a car on base, so this is a great thing for them. I just hope the base can provide enough service for them to make it worthwhile.&#8221;

The 374th Services Division has said there are plans for the taxi service to team with an off-base company so customers will be able to get a ride to Fussa Gate and have a cab waiting to take them off base.