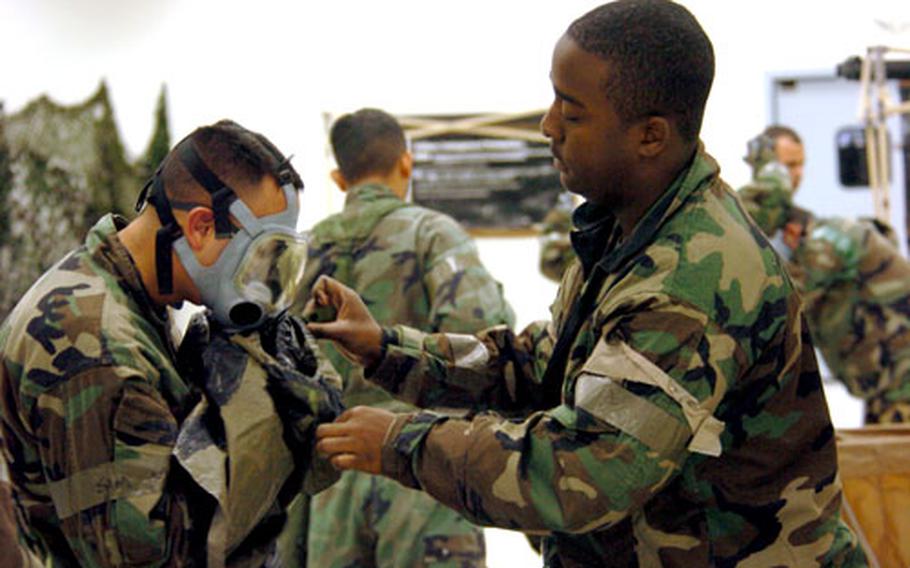 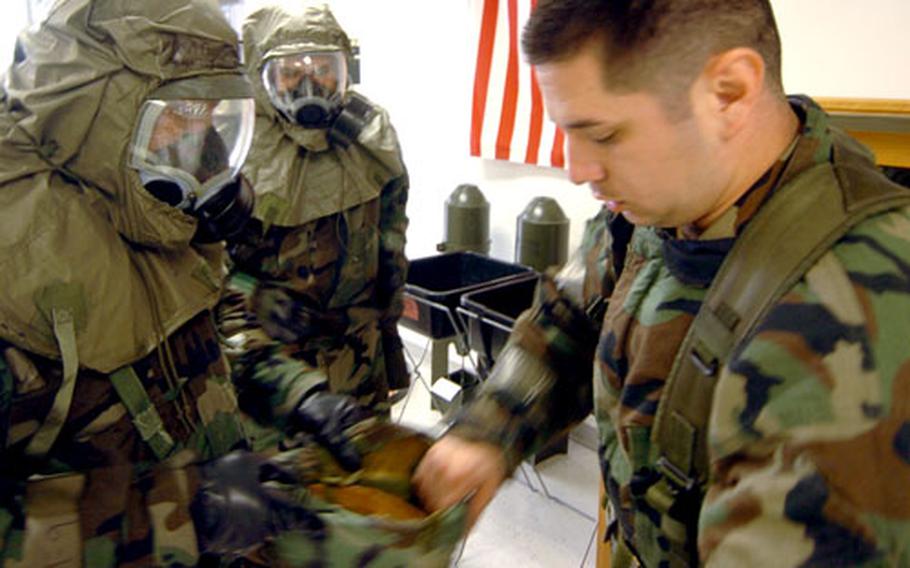 Staff Sgt. Gerald Benitez, right, instructs airmen on how to remove gear safely during the ORE on Saturday. (Christopher B. Stoltz / S&S)

YOKOTA AIR BASE, Japan &#8212; The 374th Airlift Wing cranks up its practice regimen again this week in the year&#8217;s third Operational Readiness Exercise, which runs through Friday.

It figures to be a bit more rigorous after Typhoon Bayan turned July&#8217;s session into an abbreviated affair.

&#8220;Not all portions were canceled but we did stop the exercise early and therefore lost most of the desired training,&#8221; said Lt. Col. Tom Davidson, 374th Airlift Wing inspector general. &#8220;This exercise will be more intensive if the weather remains cooperative. There are not really more events planned this time but getting a chance to do them all will provide plenty of training across the wing and make it seem more intensive.&#8221;

More than 3,000 airmen, some of whom were expected back at work Sunday, are to tackle various scenarios designed to test Yokota&#8217;s wartime mission. The scenarios were generated by the base&#8217;s IG team &#8212; which will make evaluations throughout the week.

On Monday, a noncombatant evacuation drill is planned. Other functions under scrutiny include the wing&#8217;s ability to survive and operate under adverse conditions while delivering personnel and cargo.

&#8220;Anything the wing could be tasked to do by higher headquarters is fair game to be an exercise event, as is the wing&#8217;s ability to deal with unusual events,&#8221; Davidson said. &#8220;Everything from senior leadership command and control down to individual knowledge of the Airmen&#8217;s Manual is evaluated.&#8221;

Real-world events this year have enhanced the wing&#8217;s preparation, he said.

In January, about 250 airmen were sent into Southeast Asia regions impacted by the catastrophic tsunami as part of Operation Unified Assistance. Hundreds more have supported Operation Iraqi Freedom and Operation Enduring Freedom in the global war on terror.

&#8220;As with any exercise or training event, there are always lessons learned and training accomplished, especially for personnel new to Yokota,&#8221; Davidson said.

In most cases, an overall grade is handed out by the base&#8217;s IG office about two weeks after an exercise. It&#8217;s based on a standard five-tier evaluation system used by the Air Force, which delivers marks for outstanding, excellent, satisfactory, marginal and unsatisfactory performances.

Base officials routinely alert local Japanese authorities about scheduled exercises and conduct most operations during daytime hours to reduce the noise impact on surrounding communities, Yokota officials have said. For Yokota residents, unit movements and drill scenarios are announced over the basewide public-address system.

The overrun on the south end of Yokota&#8217;s runway will be closed to regular traffic at the ORE&#8217;s outset. Davidson said temporary base road closures also may be possible this week. All major facilities, however, will remain open.

The Operational Readiness Inspection by Pacific Air Forces, which normally take place once every three years, currently is scheduled for March 12-21.