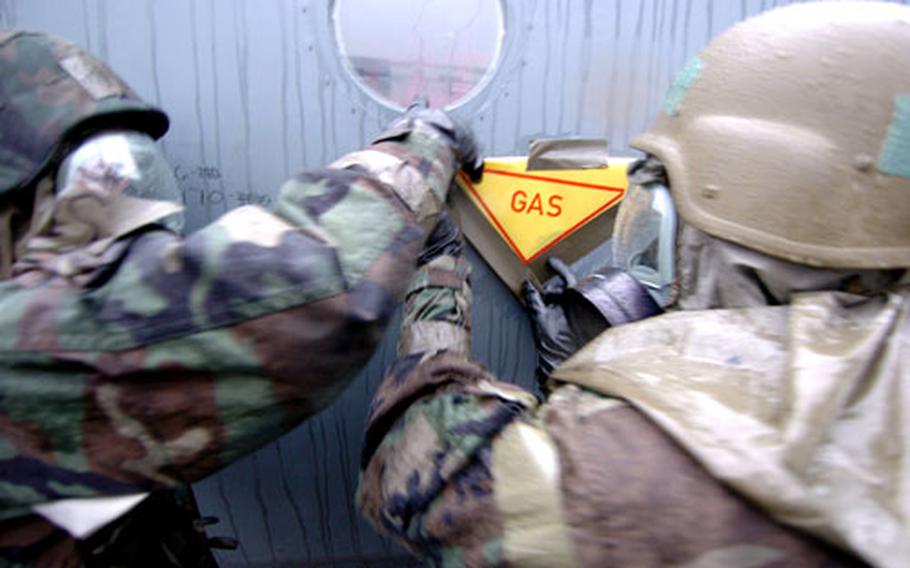 Members of the maintenance air wing train on decontaminating a C-130 aircraft during an Operational Readiness Exercise on Yokota Air Base, Japan, on Thursday. (Christopher B. Stoltz / S&S)

YOKOTA AIR BASE, Japan &#8212; Never let it be said a little rain discourages U.S. airmen with a readiness exercise to move through &#8212; at least not Thursday at Yokota Air Base, Japan.

Airmen responded to scenarios including countering a chemical attack and decontaminating an aircraft while wearing protective gear, and staging materials in preparation for deployment.

Exercises like this let units evaluate how they&#8217;d carry out their mission in a realistic combat situation, said Capt. Warren Comer, a 374th Airlift Wing spokesman.

For instance, among several scenarios held during the ORE was a hypothetical chemical attack on Yokota Air Base.

Airmen had to conduct a variety of tasks while wearing full chemical gear. With Grafton and his team watching, members of the 374th Maintenance Squadron had to assess and decontaminate a C-130 airplane that had been exposed to a &#8220;chemical agent.&#8221;

As the decontamination team arrived on site, rain poured down and a cold wind blew across the flight line. The exercise continued.

&#8220;Exercises like these allow you to see how difficult it is to work in a combat environment,&#8221; said Senior Airman Brandi Tranter, a C-130 engine mechanic for the 374th Maintenance Squadron, who took part in the drill.

Grafton added that practicing as if under chemical attack teaches airmen that &#8220;no matter what your environment, you can always rely on your technical data and regulations.&#8221;