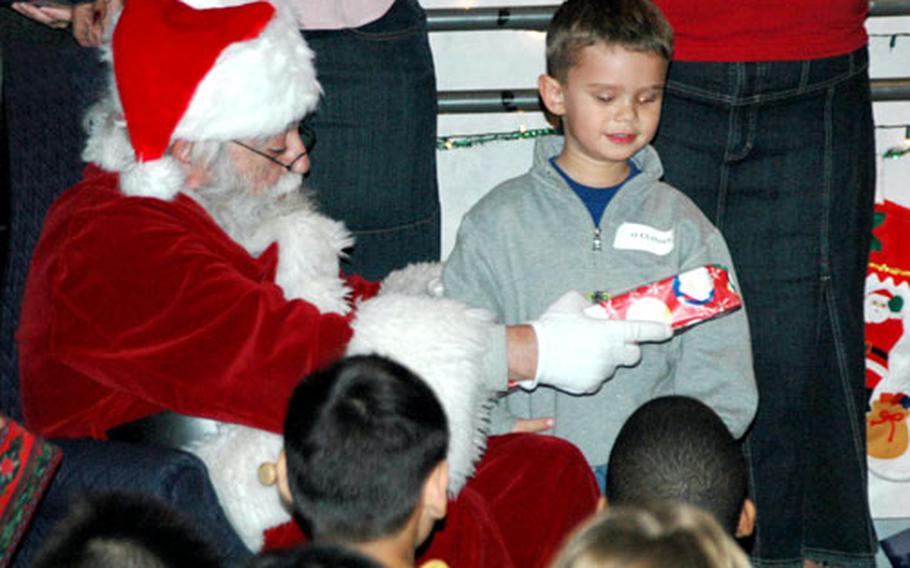 Four-year-old Alex Dickerson gets a Christmas present from Santa Claus at holiday party Monday for the families of deployed servicemembers at the Yokota Airmen and Family Readiness Center. (Bryce S. Dubee / S&S)

YOKOTA AIR BASE, Japan &#8212; More than 150 Yokota residents whose spouses currently are deployed got together Monday to enjoy a holiday party at the Yokota Airmen and Family Readiness Center.

More than just end-of-the-year festivities, such gatherings are important in helping families cope with having a family member deployed, said Terrence Grenet, the center&#8217;s director.

Every month, the center holds an event for spouses of deployed servicemembers, Grenet said. Recent events have included a Thanksgiving dinner and a Halloween party.

While children get an opportunity to play together, Grenet explained, their parents can network and meet other members of the community going through a similar situation. Establishing such connections gives spouses an outlet to share common problems, discuss issues and just have someone to talk to.

Having attended both this and last month&#8217;s event, Melek Dickerson said they&#8217;re good for getting her and her children out of the house while her husband is away from home.

Preparations for the spouses&#8217; party began at 7 a.m., Grenet said, with a crew of 30 volunteers working hard to make sure the event went off without a hitch.

This month&#8217;s event featured food, live music from the Pacific Air Forces Band, prizes and crafts. Santa also showed up to give presents to all the children there.

&#8220;One of the biggest challenges we had was making sure that we had enough presents so that every child got one,&#8221; Grenet said.

The Army and Air Force Exchange Service donated all of the toys that were given out, Grenet said. AAFES also provided 20 pizzas, four fried turkeys, six gallons of ice cream and 24 feet of submarine sandwiches.

&#8220;We wanted to let the spouses of deployed servicemembers know that they are important too,&#8221; said Larry Salgado, the Yokota Exchange general manager.

For more information about upcoming events for spouses of deployed servicemembers, contact the Airmen and Family Readiness Center at DSN 225-8725.